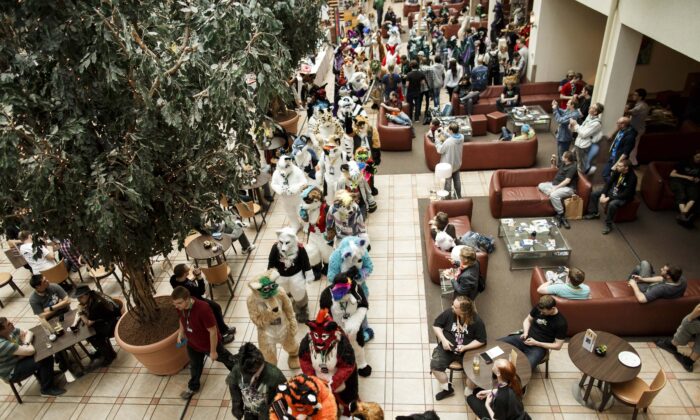 Furries walk in the Estrel hotel lobby after a march on the second day of the 2016 Eurofurence furry gathering on Aug. 18, 2016, in Berlin, Germany. (Carsten Koall/Getty Images)
By Darlene McCormick Sanchez

A convicted pedophile is warning parents that the “furry” craze, in which students dress up and act like animals, may seem like harmless fun but could expose children to sexual predators.

Furries often describe themselves online as anthropomorphic—half-human, half-animal—or as animals with human attributes. They dress in animal costumes that reflect those identities.

Though the trend is becoming popular in schools, adults have been participating in “furry fandom” for years, attending conferences and congregating online and in person.

Furries often identify as LGBT, according to Furscience, a furry research group. Some adult furries have complained that they are unfairly stigmatized in the media.

While children dressing up as furries may seem harmless, it could open the door for sexual predators.

Some adults participate in furry activities to gain access to children and “groom” them for sexual activity, a convicted pedophile told The Epoch Times. He was released on parole after serving four years in prison for crimes that included possession and distribution of child pornography and sexual conduct involving children ages 11 to 14.

At the request of The Epoch Times, and on the condition of anonymity, the parolee provided information through his therapist, Jon Uhler.

Uhler is a 30-year veteran counselor, who has worked with sex offenders in the Pennsylvania and South Carolina prison systems.

He said the parolee agreed to reveal how sexual predators use the furry phenomenon to groom children.

Furry activity is discussed among pedophiles, usually in online forums such as Discord, the parolee said in an email.

Furry costumes disguise predators behind animal masks, allowing them to hide their identity while being able to access children, he said.

“Parents think that it is like Disneyland—that if something looks cute and harmless, it is safe,” the parolee wrote.

“Sexual predators are testing the parents, while they get close to the children. The more trusting a parent is, the easier it is to gain access to the minor.”

Teachers, school administrators, and parents around the country have told The Epoch Times that students identifying as furries is a growing and disturbing trend in schools. Yet mainstream media reports have insisted that the existence of furries is a myth perpetuated by conservatives trying to falsely sound alarms about public schools.

A parent group in Colorado filed records requests to prove that school officials knew about students showing up to school as furries while publicly denying it. Records showed that the parents were right.

Furries—sometimes known among students as “animal avengers”—may hiss, bark, and claw at the air while dressed in animal tails, ears, fur gloves, or other costume embellishments.

Students portraying themselves as furries sometimes wear collars with attached leashes, which allows them to be “walked” by peers.

Alan Hopewell, a Texas clinical neuropsychologist, said that on the one hand, there’s nothing wrong with people dressing up, which is common with reenactors of historical events or characters at Disney.

But on the other hand, research has shown that some people who delve into the world of furries practice predatory behavior.

He noted that at one furry convention in Seattle, police made several arrests for sexual assaults, although it’s unclear if any of the victims were minors.

“The point is, at that end, nobody can deny that’s not pathological and a problem with mental illness,” Hopewell said.

The parolee who shared insights into how furries lure children into sexual relationships is now in sex offender treatment after his release from prison, his therapist confirmed.

Sophisticated sexual predators have no conscience, empathy, or remorse, Uhler said. They morph into sexual deviance, a state of mind that makes traumatizing victims the primary goal, he said.

“Predators know us better than we know them, because they once were normal,” Uhler said.

Sexual predators are motivated by the thrill of the hunt and playing good people for fools, he explained.

“They love game theory,” he said. “They love tactics—that’s half the fun of it. So they like beating the system.”

The parolee confirmed that grooming often starts with furry online games, where sexual predators can start conversations with young players. Predators can pretend to be any age or gender to unsuspecting children.

Once predators get children interested in furries, they start suggesting to the children that they attend events, such as furry conventions, the convict said. At those, participants usually dress in full costumes, making them resemble sports team mascots.

“Parents don’t understand that a lot of us work with others, who will also groom the minors,” he wrote.

Many adults in the furry community are involved in sexually deviant behavior anyway, so they are not likely to object to grooming, the parolee said. Once a predator establishes a relationship with a child, it’s only a matter of time until they engage in sexual contact, he added.

Predators use furry art, drawings, and videos that look like cartoons to introduce children to pornography, he said.

“That is when it becomes easier for pup play and leashes and other ways to cross their boundaries,” he wrote. “They think it is fun, and we help them understand it is our little secret.”

Children on the autism spectrum are the easiest to be groomed, the parolee said. And sexual predators easily spot the most vulnerable children.

Uhler hosts “Journey to Healing” on TECN.TV and is director of SurvivorSupport.net and ChurchProtect.org. He has been a vocal critic of furries, posting online that they are sexual predators targeting children.

That drew anger from furries and a zoophile and resulted in Uhler being kicked off Twitter for “hateful” comments about two years ago, he said.

He’s been forced to take down photos of furries, drag queen shows involving children, and other activities or associations that may be harmful to children, he said, after critics complained to Twitter.

Critics published his professional license information and filed a complaint with the Pennsylvania Bureau of Professional and Occupational Affairs, claiming he made “homophobic remarks and posts.”

The state closed the case and declined to prosecute, The Epoch Times confirmed. But his employer fired him after being inundated with complaints, Uhler said.

Uhler said that sexual predators are often psychopaths, which is different from sociopaths.

Psychopaths love to feel empowered and need to have the last word, he said. They have no conscience and calculate their moves.

Sociopaths analyze the cost versus the benefit of their behavior and won’t engage unless they feel the odds are in their favor, he said.

Psychopaths understand that people, including parents, want to give them the benefit of the doubt.

“That’s all a predator needs,” he said. “So they prey upon people’s goodness.”

Uhler said he first heard about furries about 10 years ago when assessing an inmate—a sophisticated sexual predator.

The inmate was arrested after attempting to meet a 3-year-old and 4-year-old through an undercover agent posing as a mother. When police arrested him, they found shackles, leashes, and sexual paraphernalia in his truck, Uhler said.

When Uhler was assigned to interview the inmate in Philadelphia, the man told him how furries were the perfect cover for sexual predators.

He said furry costumes that look like mascots are “the best way to access kids,” Uhler said, And the trend was growing.

“He says, ‘Well, you hide 100 percent of your identity, and parents will hand kids over to you, because they think it’s safe. So it is the best method of grooming. Everybody knows it,'” Uhler said, recalling the inmate boasting.

Intuition is one of a parent’s best defenses against pedophiles, Uhler said.

Sexualized activities or events that include children should give parents pause, he said.

“If any adult man shows an unusual interest in being around kids, especially if it has to do with sex, sexuality, and sensuality, you likely have a predator on your hands,” Uhler said.

The transgender movement leaves children confused and open to predators, he added. That’s because there’s a growing movement to give minors the power of consent over their bodies, even if their parents object, he said.

In the 14 years he’s analyzed and treated pedophiles, he found only 1 percent of them were the “snatch-and-grab” type of stranger.

Sophisticated pedophiles often have hundreds of victims by the time they’re arrested, he said. It becomes part of the game if they get into a position of responsibility and respectability at a school or church, he added.

“That’s what makes this so heinous,” he said. “I didn’t understand this until working with the sexual offenders and digging deep. That’s what the general public does not understand.”