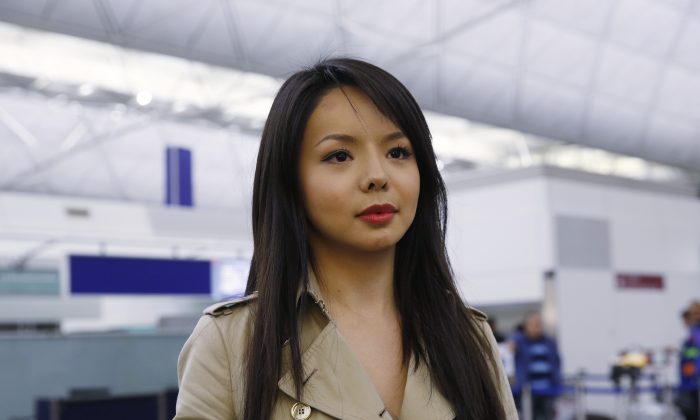 TORONTO—Miss World Canada, Anastasia Lin, was midway over the Pacific Ocean when the Chinese Embassy in Ottawa decided to tell a reporter she was not welcome in China.

The beauty queen had been excited to make the trip and had kept the details absolutely confidential. A small group put together a last ditch effort to get her to the Miss World 2015 competition in Sanya, China.

Lin campaigned for her crown on a platform of religious freedom and human rights. It was a platform that soon presented troubles. After the other contestants received necessary invitation letters from the local government, a visa requirement, Lin realized she was being left out.

She decided she had to at least try to go. Lin and her friends kept email and phone conversations to a minimum, well aware of the Chinese regime’s prolific hacking and attempts to monitor Chinese dissidents living in countries like Canada and the United States.

They’d found a loophole of sorts, a provision in Chinese visa regulations that permitted Canadian citizens to get a 15-day landing visa upon arrival in Sanya. It wouldn’t be long enough to get Lin through the competition, but she could apply for an extension.

Lin gave an embargoed interview before leaving, explaining the rationale.

Time was running out, she said. But Miss World would let her attend the event if she could get there within a couple days of the opening ceremony.

“They never disqualified me. They told me my seat is vacant. If I can receive a visa I am still eligible, so that is why I am going,” she said.

They never disqualified me. They told me my seat is vacant. If I can receive a visa I am still eligible
— Anastasia Lin

But everything changed while Lin was enroute, out of communication and unaware that the Chinese Embassy in Ottawa had told a Globe and Mail reporter she was persona non grata, unwelcome in China.

Lin has performed as an actress in a number of films depicting human rights abuses in China, and has spoken out publicly against the Communist Party’s persecution of Falun Gong and other groups in China. She performs as a Falun Gong practitioner who suffers persecution in the upcoming Canadian film “The Bleeding Edge.“

A friend based in Toronto who helped to plan the trip, but wants to stay out of the limelight, told the Epoch Times that after hearing the news, there was still some uncertainty.

“Anastasia had never been formally denied a visa by the authorities, and was still an eligible contestant in the pageant.”

“Anastasia thought that since she was never given a definite answer about the visa, she should try everything she could to get there rather than just wait out the clock,” the friend said.

The intention was to stick to the plan: Arrive in Hong Kong and try to get to Sanya and apply for a landing visa. They still hoped Lin would somehow slip through and manage to compete.

“This was not a stunt,” the friend added.

But airlines are sometimes unfamiliar with the landing visa, and are reticent to fly people without travel documents for fear of rejection by Chinese customs officials. When that happens, the airline has to fly the individual back on its own dime.

It worked for the first leg on Cathay Pacific from Toronto to Hong Kong after a bit of explaining.

But in Hong Kong, before boarding the Dragonair route to Sanya, the airline handed her a telephone: a Chinese official named Mr. Chen questioned her before she was able to board the flight. After securing her birth date, place of birth, and Chinese name, and consulting with his superiors, he informed Lin that she was not eligible for entry to China.

Lin will hold a press conference in Hong Kong at 10 a.m. on Nov. 27 local time, at the Regal Airport Hotel.

She said she was given “no reason” for the denial in the interview with the official, Mr. Chen. But a spokesperson for the Embassy in Ottawa told Craig Offman, a reporter with the Globe and Mail, that “China does not allow any persona non grata to come to China.”

The timing of the declaration is curious, coming after weeks of questions and just a few hours after Lin boarded a flight to Hong Kong from where she would go onto Hainan, the tropical island province where the Miss World finals will be held in Sanya City on Dec. 19.

Lin had prepared two statements for the press before her departure. One in the event she made it to Sanya, the other in the event she was blocked, or even detained at the airport in Hong Kong and forced to return to Canada.

“When we came up with this idea on Monday night she was like ‘Yes, that’s it!’ She felt in her bones that she wanted to go, but hadn’t figured out how,” said her friend in Toronto who helped orchestrate the trip. “She’s barely slept, but I think she’s very glad she tried everything she could.”

Correction: The verification of Anastasia Lin’s identity by the Chinese official in Sanya, Mr. Chen, took place over the telephone; the official was not physically present at the Hong Kong airport.