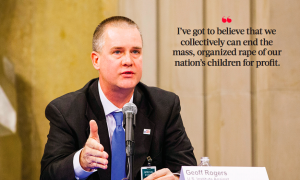 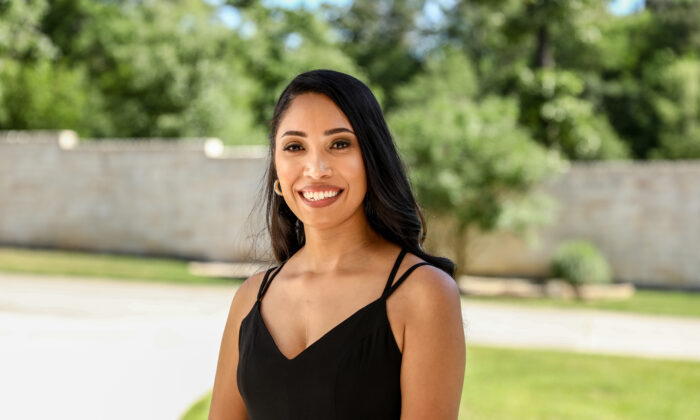 Sabrina Lopez, like many young teens in Holyoke, Massachusetts, hung out at the namesake mall. It was 2003.

She always noticed a large group of kids near an arcade and, as an insecure 13-year-old, wanted to be part of it. One boy in particular caught her attention, so when two girls in his group approached her and asked if she liked him, she said yes.

“And they were like, ‘Would you like me to put you on?'” Lopez recalled to The Epoch Times.

“And I said yes, because I thought that they were playing Cupid. I didn’t know that I just signed myself up to be exploited.”

Shortly afterward, the boy, 16, became Lopez’s boyfriend, and they developed a relationship over about eight months, until “it started to take a turn for the worse,” Lopez said.

She had started to go to his house instead of her best friend’s house for the weekend, and let her mother assume she was at the latter.

“My mother never had any problems with me and so she never questioned anything,” Lopez said. “I had so much trust. I was a Catholic school girl, I was an honor student, captain on my basketball team.”

Some things didn’t quite sit right—such as the number of young girls coming in and out of his house—but she’d been raised not to judge and allowed some red flags to slide. When she asked him about it, he said, “Oh, they’re just friends.”

Some time later, when she asked again, he struck her in front of his friends, and she was told, “When the fellows are talking, you are not to speak,” Lopez said.

“I didn’t know who I was intimidated by the most—him or my mom.”

The physical abuse continued, and that’s also when the sexual encounters began. Her boyfriend became her trafficker, pimping her out for money. He recorded her, which gave him explicit videos to threaten her with.

“My recordings would be used as blackmail, if I wasn’t cooperative or submissive,” Lopez said. “His mother, his sister, the stepfather, they were all a part of it—they knew what was going on.”

Her behavior changed, but it was easy to dismiss as teenage angst.

“Also, my mother was dealing with my oldest brother, who was in and out of jail at the time,” Lopez said. So she told no one.

In 2004, at age 14, Lopez got sick at school and was sent home. Her mother asked if she could be pregnant and came home armed with three pregnancy kits, which all came back positive.

Lopez said she felt relief that she could finally tell her mother what was going on, “as much as I could understand and explain, because this was 15 years ago—trafficking wasn’t even a thing then. It was more so sexual assault and domestic violence,” she said.

“I remember her wanting to pursue charges. And I said, ‘No, I don’t want to deal with that. I just want to figure out what’s now.'”

Meanwhile, being pregnant made her useless to her trafficker.

“The last thing my exploiter said to me was, ‘Good luck trying to find someone who’s going to take care of you and that child.’

But she was young and the pressure to have an abortion was constant for months. Everyone was telling her she was going to be a teen mom statistic on welfare with no education.

Determined, she kept her daughter, who is now 15.

“She saved my life, so I owed her hers,” Lopez said.

Her mother put her in counseling, but the counselor wasn’t the right fit for Lopez. She wanted Lopez to go over the details of what had happened, but Lopez just needed someone to help her make a plan for the immediate future and being a teen mom.

“That was more overwhelming than what I’d just been through,” she said.

Despite the odds, Lopez finished high school and went on to earn a degree in health administration. She married and had four more daughters. And along with the two daughters that her husband had previously, she is mom to seven girls, who range in age from 2 to 19.

But for years, Lopez remained angry and guarded, holding everything inside. It wasn’t until she started working at a survivor safe house that it all clicked for her.

“I was like, I’m connecting to these survivors, on a way-personal level. I can relate to what they’ve experienced,” she said. “And that’s when I had that ‘aha moment’ where I [realized] I was exploited. I was trafficked. I was definitely manipulated and controlled and blackmailed, and you name it.”

Last year, she made the decision to speak publicly.

“I created an Instagram page, thinking nothing of it, just wanting to empower other survivors. And it just grew tremendously within a year,” she said. “I’m finally stepping out of that darkness and just embracing it.

“I’m more than a survivor. I’m more than my story. I’m just going to do something about it now. And it’s been awesome.”

Lopez has received a lot of feedback from other survivors and her focus is on empowering them to tell their stories.

“I have that heart to help. And it’s because I felt so helpless. So I want to show up for survivors the same way I needed someone to show up for me,” she said.

Girl, Speak Up is now an Instagram page and a website, and Lopez has just registered it as a nonprofit organization to fight sex trafficking.

The website provides information and opportunities to connect with Lopez, as well as information, such as breaking the myth that traffickers target victims they don’t know. In reality, the website states, “Many survivors have been trafficked by romantic partners, including spouses, and by family members, including parents.”

Lopez, now 30, said one of the biggest mistakes that parents can make is to let their children do whatever they want and not be present in their lives.

She warns teens and young adults not to send photos or videos of themselves that they’re not prepared for everyone to see.

And if it’s too late, “tell someone you trust,” she said. “Definitely don’t try to handle it yourself. Especially if you’re a teenager.