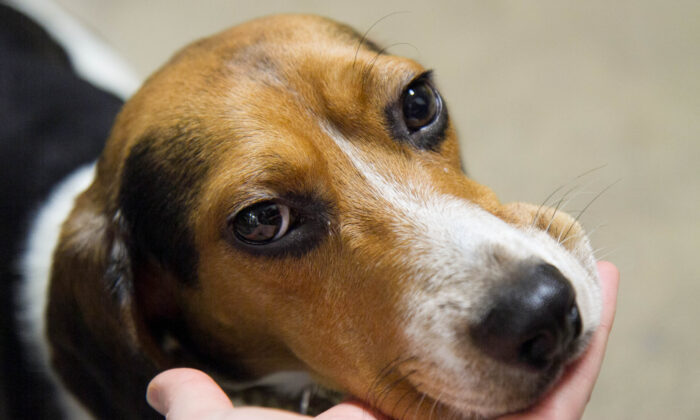 Injecting beagle puppies with cocaine is the latest in a series of taxpayer-funded experiments on animals disclosed by the nonprofit watchdog group White Coat Waste Project (WCW).

According to Amanda Nieves in her article for the WCW, experiments that ran from September 2020 to September 2021 and March 2020 to March 2021 were filmed to observe for adverse reactions.

The experiments were contracted to SRI International, Nieves said, which WCW has reported in 2021 as the institute that was de-barking beagles by cutting their vocal cords so that the dogs couldn’t bark, howl, or cry during an experiment.

The purpose of NIH’s most recent experiments was to study the interaction between an experimental drug and cocaine by strapping puppies into a jacket contraption that maintains an infusion of cocaine into their veins while they are dosed with another drug.

“The objective of this study is to evaluate the cardiovascular safety of a drug (test article) administered via oral gavage and an intravenous drug of abuse (interaction article), for example, cocaine or methamphetamine, in unrestrained freely-moving, telemetered beagle dogs and to collect blood for bioanalysis,” page 12 of the FOIA-obtained document states.

According to NIDA in a statement below, the experiments are to test a drug to treat “cocaine use disorder” in humans because “unlike for opioid use disorders, there are currently no FDA-approved medication treatments for stimulant use disorders.”

When the experiments are completed, the dogs are either euthanized or used for other experiments, WCW said.

According to WCW, because SRI International, a research group headquartered in Menlo Park, California, didn’t have the correct equipment, the institute outsourced the experiments to Charles River Laboratories International, Inc., which is the pharmaceutical company headquartered in Wilmington, Massachusetts to which the Department of Health and Human Services paid $13.5 million to maintain monkeys on Morgan Island in South Carolina to be used for NIAID’s “excruciating experiments.”

WCW disclosed documents in October 2021 exposing the experiments on rhesus monkeys that involved injecting monkeys with various infectious diseases, such as Ebola and the Lassa virus that results in hemorrhaging, pain, brain damage, loss of motor control, and organ failure while pain relief was withheld.

“The NIH, including its divisions such as the National Institute of Drug Abuse and NIAID, are developing experimental drugs, and then to gain approval from the FDA (Food and Drug Administration) for those drugs, they are commissioning additional animal tests to begin that process,” Justin Goodman, vice president of advocacy and public policy for WCW, told The Epoch Times.

According to a July 2021 WCW report, though the FDA doesn’t require experimental drugs to be tested on dogs, the FDA has issued frequent guidance pointing experimenters toward the use of other non-rodent species, specifically dogs.

The NIH and its divisions continue to use dogs, despite the NIH itself having stated that 9 out of 10 drugs that pass animal tests fail in humans because they don’t work or are dangerous, Goodman said.

Goodman shared an NIH document stating in its first paragraph that 90 percent of drugs tested on animals fail.

“So, you have this institutional inertia that is perpetuating these wasteful and cruel experiments on dogs and other animals inside the federal government,” Goodman said.

Animals are used in these experiments to test the limits of a drug’s toxicity.

“Basically, they dose a rodent and non-rodent species with increasingly large amounts of whatever the experimental drug is to see at what point they get sick or die,” Goodman said.

Drug sponsors interested in reducing animal testing in their experiments can meet with the FDA to discuss alternatives, however, Goodman said there’s no record of the NIH making a case for avoiding experiments on animals.

“Instead, they have just fallen back on bad habits and relied on continuing to poison puppies instead of seeking more efficient and effective ways to get their drugs approved,” Goodman said.

The stated mission of WCW is to bring accountability and transparency to the use of taxpayer funds through federal grants and contracts that animal experimenters take advantage of “at great expense to taxpayers without producing anything of value, draining resources from meaningful research and public health programs.”

WCW is comprised of advocates, scientists, doctors, and political strategists who initiate grassroots tactics, media campaigns, coalitions, and legal approaches to ending the $20 billion in spending on animal experimentation.

WCW’s uncovering of the animal experiments prompted 24 U.S. lawmakers in October 2021 to demand answers from Dr. Anthony Fauci, the director of NIAID and the chief medical advisor to President Joe Biden.

The Preventing Animal Abuse and Waste (PAAW) Act of 2021 would prevent Fauci from conducting or supporting research that could result in death, irreversible damage, significant pain, or distress to dogs.

The bill, which has bipartisan support, also requires that NIAID report to Congress ongoing dog experiments, its plan to phase out dog testing, and how much money is being spent on the experiments.

To date, Fauci hasn’t responded to the lawmakers.

A press officer for NIDA responded to The Epoch Times’ request to NIH for comment stating the experiments are to “test the safety of a novel drug for the treatment of cocaine use disorder before moving into a human study.”

The spokesperson said NIH ensures the welfare of the animals used and “where possible, reducing their use.”

Proposals for the use of the animals goes through “a rigorous review process to assess their scientific and technical merit, which includes an assessment of the applicants’ plans for the protection of research animals.”

The spokesperson said reviewers examine the justification for experimenting on animals and if alternative models could be used.

The animals are protected by laws, regulations, and policies, the spokesperson said.