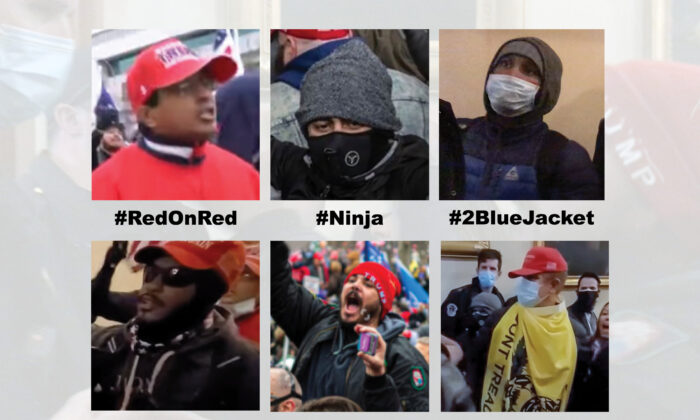 The Ashli Babbitt family seeks the identities of six men who were in the Speaker's Lobby hallway in the U.S. Capitol on Jan. 6, 2021. (Graphic/The Epoch Times)
US News

Family asks for the public's help identifying photos of witnesses from Jan. 6
By Joseph M. Hanneman

Most of the men who attacked the Speaker’s Lobby doors at the U.S. Capitol on Jan. 6, 2021, have not been identified or arrested, and the family of Ashli Babbitt wants to question them about the events that led up to her shooting death.

Of the dozens of people who congregated before the double doors leading from the hallway into the Speaker’s Lobby that day, only two have been arrested by the FBI. The Babbitt family has identified at least six others who could have valuable information on what took place before and after U.S. Capitol Police Lt. Michael Byrd shot and killed Babbitt.

Aaron Babbitt said identifying these men is an important part of his investigation into his wife’s killing. He said the authorities are not interested in pursuing it.

“To look into these people would go against what they’re trying to do, which is to just forget about Ashli and just look the other way,” Aaron Babbitt told The Epoch Times. “‘Pay no attention to what’s going on over there.’ So they don’t want these people. They probably don’t want to find them. Whether they are government actors or informants or whatever, they don’t want to really find those people.”

Tayler Hansen, the video journalist who documented the shooting, said the most active rioters from the hallway are still unknowns.

“The good majority of the people who haven’t been named are the ones being the most violent,” Hansen told The Epoch Times. “Inciting the window breaking and actually causing everything that took place in that room. The only one who has been named that actively took part was Zachary Alam.”

Alam was arrested by federal agents on Jan. 30, 2021, and later indicted for his well-documented role in attacking the Speaker’s Lobby doors. Alam portrayed himself that day as being a member of the Proud Boys, but comments he made to Hansen earlier that day don’t indicate a patriotic disposition.

“This is insane, bro,” Alam says to Hansen, who was live-streaming to Instagram at the time. “We’d love to [expletive] revolutionize the whole world. It’s the repetition of what happened decades and centuries ago and it’s repeating itself. It’s going down right now!”

The “unknowns” include a man nicknamed by internet sleuths as #RedOnRedGlasses, who was in the front line at the Speaker’s Lobby at numerous points. He was directly to Ashli Babbitt’s left when she climbed into the open window and was shot, video shows. After Ashli Babbitt is carried away by police, he is at the front line, shouting at officers.

#RedOnRedGlasses is also on video launching a long 2-by-4 beam of lumber through a ground-level window of the Capitol. This man is listed as photo No. 300 on the FBI’s Jan. 6 wanted list.

One of the most mysterious of the unknowns is #TwoBlueJacket, who stood in the north corner of the hallway during much of the unrest.

He is seen to Ashli Babbitt’s right as she pleads with police to call for backup. After the police move aside from the doors, he uses his right shoulder in an attempt to open the door. He also appears to flash some kind of hand signals while Babbitt is shouting at the officers.

Just before Ashli Babbitt is shot, #TwoBlueJacket moves across the hall and departs from view. He is seen on video elsewhere on the Capitol grounds, wearing a knit cap and a hood, carrying a black backpack. He is listed as photo No. 302 by the FBI.

A man called #WhiteLogoInsider and on some sites #Ninja moves into the north hallway corner just before Ashli Babbitt climbs into the side window and is shot. She falls at his feet, between him and #RedOnRedGlasses.

#Ninja ducks down as a Capitol Police SWAT team member aims his rifle into the Speaker’s Lobby, not knowing at the time who fired the shot at Ashli Babbitt. “They thought it was an active shooter at the time, until they cleared it,” Hansen said.

Ninja is seen on video with his hands up as police and bystanders attempt to render aid to Ashli Babbitt. Later he is seen talking to a plainclothes Sergeant at Arms agent in the hallway corner.

One of the men who tried to kick the Speaker’s Lobby door in is #MrFlyEyes, who is listed as photo No. 304 on the FBI wanted site. As rioter Alam is beating on the glass with a helmet, #MrFlyEyes tries kicking the left-side door. He appeared to be live-streaming to Instagram at the time.

The #GadsdenFlagMan is seen standing directly behind Alam as he pounds the door and glass window with a helmet. After the police leave the doors unguarded, he kicks the doors and tries to push them open.

He stays on the scene until after Ashli Babbitt is carried downstairs by SWAT team members. Most of the time on video his face is covered by a surgical mask, but he briefly removed it. It does not appear he is listed by the FBI as wanted.

#HuskyMarioInsider was present during much of the rioting, shouting at police and imploring them to let protesters into the Speaker’s Lobby. “We don’t want to hurt nobody. We just want to go in the House!” he shouts just before Alam punches one of the windows, the video shows. His is photo No. 303 on the FBI list.

Another man who attacked one of the door windows with the dowel of a flag pole has also not been identified. He has his back to the cameras during the violence.

“That should be looked into, their identities,” Hansen said, “because they could easily be federal informants. There’s a reason why they didn’t show up on the FBI’s list—only some of them did—and even those that have haven’t been properly identified.

“If people are looking for federal informants or federal agitators of any sort, they should really pay attention to the Ashli Babbitt video closely,” Hansen said.

Many of these unidentified figures entered the Capitol at the same time, as part of a crowd that grew as they moved from the Rotunda into other areas of the Capitol.

Aaron Babbitt said the lack of scene processing by crime-scene investigators remains among his deep frustrations from that day. Police are seen tracking through Ashli’s blood on the floor and leaving red footprints in the hallway and down the stairs. Someone tosses her beanie cap right into the blood pool.

“I don’t think there was any investigation on the scene. Nothing,” Aaron Babbitt said. “They just took the videos, what they were, and used their own videos that they won’t show anybody.”

Surveillance video of the hallway is believed to be among 14,000 hours of video of events that day possessed by the U.S. Department of Justice.

That video remains under a federal protective order. An overhead view of the hallway action would provide the clearest view of the actions of the various rioters and bystanders. The video likely will be among items subpoenaed by criminal defense lawyers and those filing civil lawsuits.

Aaron Babbitt said it pains him to see how his wife was wheeled out to the ambulance, with her bare chest exposed, only to be captured on camera. “They didn’t even have the decency to give her any dignity,” he said. “They wheeled her out there bare chested in front of the world.”

Aaron Babbitt told The Epoch Times he continues to be harassed by people who denigrate his wife.

“I think I got three or four calls on Martin Luther King Day, people just calling in and saying, ‘Hey, is Ashli coming to work today?’” he said. “I’ve had it all, seen it all. People calling up—because I run a pool service—and they’re like, ‘Hey, any way Ashli can come out to clean my pool?’ ”

“It happens enough times you just realize these are scum of the earth people that have no backbone,” Aaron Babbitt said. The threats and hateful comments started on Jan. 7, 2021.

“I’m just getting these awful messages and I’m like, ‘I just lost my wife. What kind of scum of the earth are you?’” he said.

Aaron Babbitt is buoyed by the renewed public interest in his wife’s case and the questions surrounding her killing. He is also receiving emotional and financial support as the family prepares a lawsuit against police and potentially others.

Trump slammed Byrd as an “out-of-control dope” whose identity was shielded by authorities for eight months after the shooting.

“Let’s see how he could do without the protections that he got. And, by the way, if that happened the other way around, they’d be calling, ‘Let’s bring back the electric chair,’ that’s what they’d be calling for. He’s a disgrace the way he shot Ashli.”