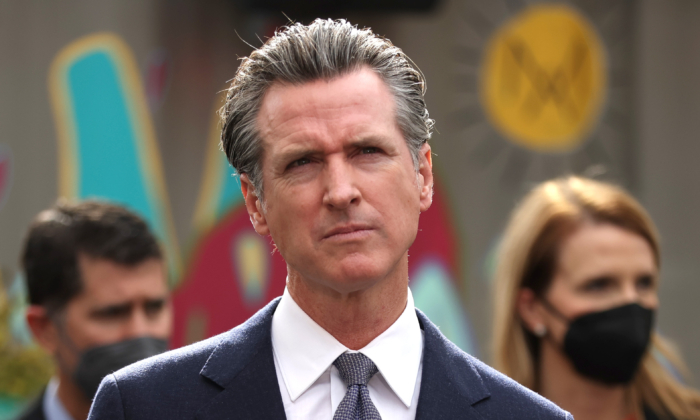 California Minimum Wage to Increase in 2023 Amid Soaring Inflation

California will raise its minimum wage to $15.50 per hour for all workers beginning next year as inflation soars across the nation, Gov. Gavin Newsom announced Thursday.

Newsom, a Democrat, noted that the increase was needed due to a provision in the state’s existing minimum wage law, signed by former Gov. Jerry Brown in 2016, which mandates a minimum wage increase to $15.50 when inflation exceeds 7 percent.

California’s Department of Finance forecasts that will happen by the end of June.

“The COVID-19 pandemic has resulted in persistent supply chain disruptions and labor market frictions have driven inflation to its highest rate in 40 years,” said Newsom in a statement. “These conditions have further been exacerbated by Russia’s war in Ukraine.”

Newsom’s office said the wage increase will benefit millions of California households who are currently struggling with the skyrocketing rate of inflation as the price of everything from food and gas has increased.

For years, California’s minimum wage has increased steadily while inflation numbers remained modest, Newsom’s office noted. The state has a higher minimum wage than the federal minimum wage, which has stayed at $7.25 an hour since 2009.

The announcement regarding a boost in wages was praised by labor groups, including SEIU California.

“For nine years, fast food workers like me have been organizing, going on strike and speaking out to make $15 an hour both a reality for workers and a starting point for tackling poverty across California,” said McDonald’s worker and labor activist Guillermina Blancas in a statement provided by SEIU California to The Sacramento Bee.

“Today’s wage increase gives families like mine a lifeline as it becomes harder each day to keep up with the rent and keep food on the table,” Blancas added, while also calling for California to do more to address other issues in the state such as worker exploitation, wage theft, and discrimination.

However, California Department of Finance Director Keely Martin Bosler said the rise in wages could see prices jump in restaurants, which have low profit margins. Overall, though, Bosler said the increase in the minimum wage is “expected to have a very minimal impact on overall inflation in the state’s economy.”

Skyrocketing inflation across the U.S reached 8.5 percent in March and left Americans paying more at the pump.

Newsom has previously proposed a $400 gas tax rebate for each motorist as opposed to lifting the gas tax in the state. In recent months, the states of Connecticut, Georgia, Maryland, and New York have either suspended or plan to suspend their respective gas taxes.

Elsewhere on Thursday, Newsom proposed spending $2.7 billion on the state’s Emergency Rental Assistance program, $1.2 billion on a fund to help people pay their electricity bills, and $200 million for water bills. The Democrat also proposed spending $439 million to temporarily pause the tax on diesel fuel and $157 million to waive childcare fees for low-income families.

In a live address on Tuesday, President Joe Biden said that addressing inflation is his “top domestic priority” and that “I want every American to know that I’m taking inflation very seriously.