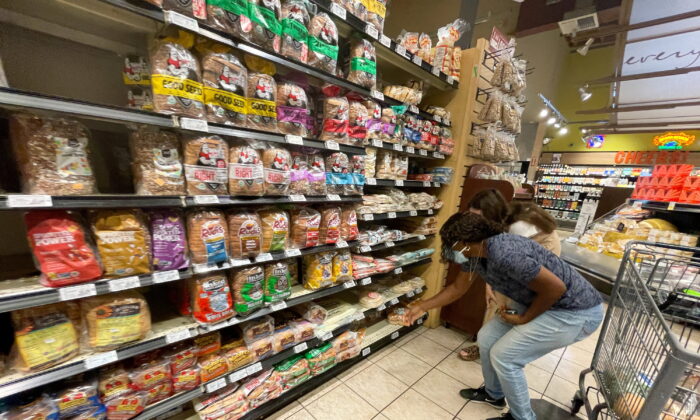 According to a recent Suffolk University/USA TODAY survey (pdf), 45.3 percent of Americans have had to cut back their spending on groceries, and 59.4 percent said they are eating out less often as a result of inflation.

The survey of 1,000 registered voters has a margin of error of plus or minus 3.1 percentage points.

Another 48 percent of respondents said they are driving less as the cost of gasoline has surged, and 45.4 percent said they are postponing or canceling vacations or travel plans amid rising costs.

The survey comes after the Bureau of Labor Statistics released its Consumer Price Index data showing that inflation stood at 9.1 percent in the United States in June. That is the highest figure seen since the early 1980s.

While fears mount that a recession could be nearing, the Federal Reserve’s Federal Open Market Committee (FOMC), in July, raised interest rates by 75 basis points for the second time in a month in an effort to combat soaring inflation.

The next FOMC meeting is scheduled for Sept. 20–21.

Meanwhile, a string of big-name retailers and other companies across the United States, including Procter & Gamble and Walmart, have warned that consumers are beginning to buckle under the weight of inflation, and are changing the way they shop amid price hikes.

Separate data published in July showed that Dollar stores are seeing an increased number of customers who are looking to stretch their money further as the costs of food and everyday essentials, and much else, continue to rise.

According to that data, released by foot-traffic analytics firm Placer.ai, foot traffic to discount and “dollar” stores across the United States remains above pre-pandemic levels, even as many other retailers across the country are struggling.

Republican lawmakers and other experts have blamed President Joe Biden’s failed policies for the surge in the cost of living, which has climbed steadily since he took office in January 2021.

“Inflation, which is a direct result of the president’s policies, is a cancer on the American Dream, and it is rampant,” the Senate Judiciary Committee member added. “It is unrestrained.”

Others believe the central bank’s monetary policies will bring down inflation.

But with inflation building, support for Biden is dwindling, with 45 percent of respondents polled by Suffolk University/USA TODAY stating that they “strongly disapprove” of the job Biden is doing as president and just 15 percent saying they “strongly approve.”