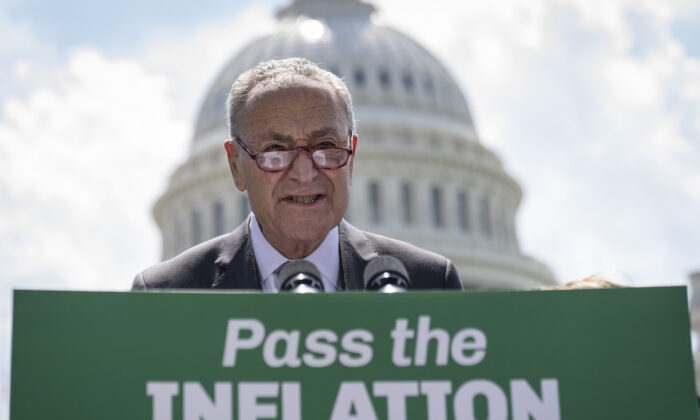 Inflation Reduction Act Should Be Named ‘Exactly the Opposite,’ Will Have ‘Disastrous Effects’: Finance Professor

The Democrats’ Inflation Reduction Act will not reduce inflation as claimed and might end up harming the American economy, a finance professor said in an interview with NTD.

“They really didn’t name this inflation reduction act correctly, it should be exactly the opposite,” Michael Busler from Stockton University said in the interview. The Act will neither reduce the country’s high inflation nor speed up economic growth, he said. The economy has had two consecutive quarters of negative GDP growth, which indicates a recession.

As such, the American economy is currently in stagflation, which refers to a “stagnant economy with inflation.” The last time the United States was in stagflation was during the time of the Carter administration (1977-1981), Busler said.

In the last three fiscal years, including the current one that ends in September, the federal government will have spent $7 trillion more than its tax revenues on a country with a $23 trillion economy. “That excess demand is very inflationary,” the professor said.

Back in 1980, the Fed raised interest rates and triggered “a recession to get out of the recession,” Busler said, adding that in 1982, Congress cut down taxes significantly, after which the United States enjoyed a 25-year economic expansion.

To get the country out of stagflation today, Busler said the government needs to reduce its spending as well as reduce taxes for all Americans and businesses. However, the Inflation Reduction Act does “exactly the opposite” and is going to have “disastrous effects.”

In the interview, Busler also criticized the climate provisions in the Inflation Reduction Act—specifically the tax credits for Americans using “green” energy. He points out that such credits are an attempt to stimulate demand where “there isn’t demand to be stimulated.”

“If you buy an electric car, whatever kind of tax credits are in there, it means the government is not raising that tax revenue. They’re essentially increasing spending, and that’s gonna make the problem even worse. Fiscally, this is not the time to be doing that,” Busler said.

The $700 billion Inflation Reduction Act was passed by House Democrats on Aug. 12 in a strict party-line vote of 220-207. The bill will now go to President Joe Biden’s desk for final approval. The Senate passed the bill on Aug. 7 through the reconciliation process, which overrides the 60-vote filibuster threshold for a simple majority.

During the house floor debate, Budget Committee Ranking Member Jason Smith (R-Mo.) pointed out that the bill is being passed at a time when inflation, which has risen 13.7 percent since Biden came to power, is at a 40-year high and real wages of Americans have fallen by 4.5 percent.

“Are we here debating how to alleviate that suffering? No. We are here to debate what Democrats call the ‘Inflation Reduction Act’—which everyone from the Congressional Budget Office to 230 different economists, [and even] Sen. Bernie Sanders (I-Vt.), have said will not reduce inflation,” Smith said.