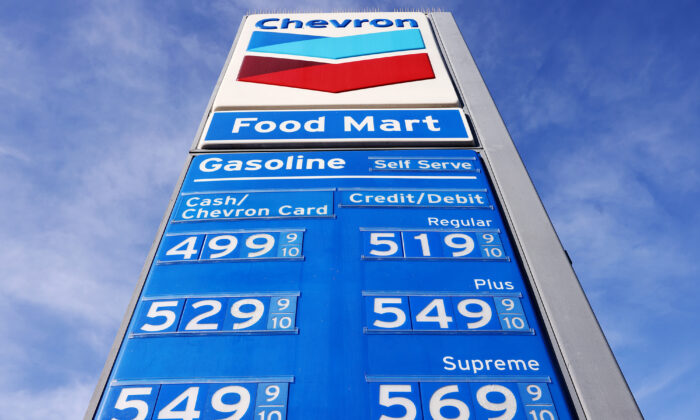 Gasoline prices above $5 per gallon are displayed at a gas station on Nov. 15, 2021. (Mario Tama/Getty Images)
Inflation

Consumer prices accelerated in the year through November at their fastest pace in 39 years, new government data shows, marking the sixth straight month of inflation running above 5 percent and delivering a fresh sign that inflationary woes continue to bedevil the U.S. economy.

The Bureau of Labor Statistics (BLS) reported on Dec. 10 that the Consumer Price Index (CPI), which reflects inflation from the perspective of end consumers, rose 6.8 percent in the 12 months through November, a level not seen since May 1982, when it hit 6.9 percent.

The annual rise in the CPI gauge was in line with consensus forecasts, but the 0.8 percent monthly pace of inflation reported by BLS was somewhat of an upside surprise, with economists expecting a more moderate rise of 0.7 percent. Still, that represents a slight month-over-month slowdown after CPI inflation surged in October by 0.9 percent, more than doubling September’s rate of 0.4 percent.

The biggest contributors to November’s rate of inflation were gasoline, shelter, food, used cars and trucks, and new vehicles, the BLS report said, noting a 3.5 percent month-over-month rise in the energy index and a 6.1 percent rise in the gasoline index. On a 12 month basis, energy prices shot up 33.3 percent while food prices rose 6.1 percent, with the changes representing the largest over-the-year rises in both measures in at least 13 years.

“Further evidence of inflation broadening out, household furnishings, apparel, and the usual suspects of new and used vehicle prices all posted outsized increases in November,” Bankrate Chief Financial Analyst Greg McBride told The Epoch Times in an emailed statement. “Inflation is outpacing increases in household income and weighing heavily on consumer confidence, which is at a decade low. It is only a matter of time before it impacts consumer spending in a material way.”

Annual CPI inflation has now been running at over 5 percent for six straight months, well above the Fed’s 2 percent target. Last month’s annual CPI print came in at 6.2 percent, the highest level in 31 years, delivering a blow to the Fed’s “transitory” inflation narrative and prompting Federal Reserve Chair Jerome Powell to announce that it was high time to “retire” that word in describing the current inflationary environment.

Besides high inflation, a flurry of labor market data—including job openings rebounding to near-record highs, the labor force participation rate edging up, unemployment falling to 4.6 percent, and weekly jobless claims plunging to their lowest level since 1969—have further bolstered the case for monetary tightening.

“Seeing substantial and more than ‘transitory’ inflation, high levels of job openings and the ongoing ‘Great Resignation,’ the Federal Reserve appears to be in the process of making a shift to a quicker end to monthly asset purchases,” Bankrate Senior Economic Analyst Mark Hamrick told The Epoch Times in an emailed statement. “That’s a likely prelude to higher interest rates sooner. But record low interest rates can’t and shouldn’t last forever.”

The Fed is currently on track to phase out its $120 billion per month in bond purchases at a pace of $15 billion per month, which would conclude the process in June. The Fed has, however, left the door open to a faster taper if conditions warrant, with expectations building for that to be the case when the central bank convenes its next policy meeting next week.

Goldman Sachs analysts recently predicted that high inflation would force the Fed to double its pace to $30 billion per month starting January, bringing the taper to a close in March and paving the way for interest rates to rise.

There’s a 40.1 percent chance of the Fed making its first 25-basis point rate hike in March, according to the CME’s Fed Watch tracker.