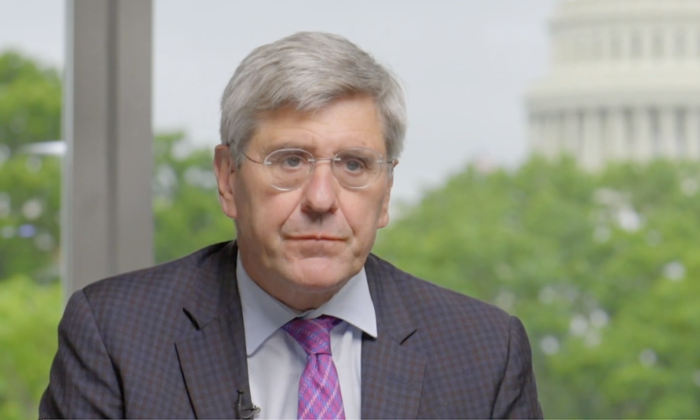 Stephen Moore in an interview with NTD's "Fresh Look America" that aired on July 4, 2022. (NTD/Screenshot via The Epoch Times)
Constitutional Rights

“The whole idea of the American Constitution was to really limit the spending and the power of the federal government,” Moore told NTD’s “Fresh Look America” program in an interview aired on July 4.

“Somehow [there’s] the idea that making government bigger is going to solve our problems. No, it’s making us less free, it’s making us poor, and it’s eroding the very freedoms that made America a special place,” said Moore.

Moore said the government expanded by increasing its spending, such as in the years after the 2008 crisis.

“When the 2008 crisis hit, we made a lot of mistakes,” said Moore. “We started bailing out firms. We should have just suspended the income tax for a year. It would have been cheaper than all the bailouts. And that would have really inspired people to go out and work and start new businesses or recapitalize the country.”

Moore said the Obama administration spent about $1 trillion on his stimulus programs, and now “we want to spend 3, 4, or $5 trillion.”

Moore recalled that when he came to Washington in 1984, the national debt was a little over $1 trillion. Now it’s over $30 trillion.

“So you just have this massive growth of government,” said Moore. “Washington is just sucking power from the rest of the country. It’s like we’re paying our tribute to Washington. They’re supposed to work for us, but we’re working for them now.”

It’s not surprising that three counties in the D.C. area are among the wealthiest in the nation, Moore said, pointing out that Washington produces “lawyers, laws, regulations, and bureaucrats.”

Forbes reported that Loudoun and Fairfax in Virginia and Howard in Maryland are among the top ten richest counties.

“When you just shovel money into the economy, and you borrow and you print money to pay for all of that, it’s clear as the sun rising in the east and setting in the west that you’re going to have inflation. I’m just surprised that there were economists who were surprised about that result,” said Moore.

“These government spending programs, in almost all cases, they actually make the country poor. All they do is redistribute income from one person to another. They reduce incentives for people to work, invest, and build businesses,” said Moore. “It’s the free market capitalist system that is the goose that lays the golden eggs. It’s not government. Government doesn’t create anything except havoc, and rules and regulations and bureaucrats.”

According to a June report from the Bureau of Labor Statistics, the 12-month consumer price index, a measure of inflation, increased by 8.6 percent in May, a record high for 40 years.

On June 23, Moore testified in a hearing, held by the Heritage Foundation and led by Rep. Andy Biggs (R-Ariz.), that President Joe Biden’s policies had made Americans poorer.

“Wages are growing at 5 percent. This is simply math. If month after month after month, people’s incomes are growing much more slowly than the inflation rate, they’re becoming poorer over time. Joe Biden is making America poor,” Moore said at the hearing. Moore is a distinguished fellow with the Heritage Foundation, one of the nation’s most influential conservative think tanks.

The first impact of a recession on people’s freedoms is people’s livelihoods become at risk, said Moore. He explained that many people would lose their jobs, and many businesses would go bankrupt during a deep recession.

“What’s really frustrating to me is that the contraction of the economy we’re seeing really is the opposite of what we should be seeing if we had stuck with Donald Trump’s policies,” said Moore. “I’m a little biased because I worked for Donald Trump on the economy. But we would have the economy flying high right now.”

Moore explained that now COVID-19 is largely behind us: Businesses have reopened, people are going back to work, and people are spending again. “So there’s no reason this economy shouldn’t be really strong,” he added.

Moore said we are “probably” in a recession already.

“And it’s a result of almost every decision that [President] Joe Biden has made on the economy. And I can’t think of too many exceptions,” said Moore.

In an interview with The Associated Press last month, Biden called the claim “bizarre” that his pandemic rescue plan was to blame for inflation.

“First of all, [recession is] not inevitable. Secondly, we’re in a stronger position than any nation in the world to overcome this inflation,” said Biden. “If it’s my fault, why is it the case in every other major industrial country in the world that inflation is higher?”

However, the $360 billion deficit decline in fiscal 2021 was far less than the $870 billion the Congressional Budget Office estimated in early 2021, said CNN fact-checker Daniel Dale. Marc Goldwein, a deficit expert, told Dale that Biden’s claim was a “reversal of reality” and the deficit would have fallen by much more had Biden come to the office and “not done anything.”

‘Tell You How to Live’

Moore said a growing government tends to control people as much as possible.

“The left in America isn’t about helping poor people or reducing racism or trying to rebuild the economy. The left is about one word: P.O.W.E.R. They want power. They want to tell you how to live your life,” said Moore.

“Think about this. They’re telling you what schools your kids can go to. … They want to get rid of cigarettes. You can’t smoke a cigarette. They want to tell you what you set your thermostat in your house, what light bulb you use. Every decision that you make now, it’s almost like the politicians have to approve it. And we’re just surrendering our freedoms day after day.”

The Biden administration recently asked Americans to drive electric cars to counter the high gas prices. In August 2021, Biden signed an executive order setting a goal of having 50 percent of cars sold in America in 2030 be electric cars.

New York has proposed “electrifying everything” to reach a zero-emissions economy by 2050. If the proposed scoping plan were adopted, the state would force its residents to switch to electric appliances for cooking, drying clothes, or heating water as early as 2030.

“We have about 30 regulatory agencies, the ABC agencies—the FTC [Federal Trade Commission], the CDC [the Centers for Disease Control and Prevention], the FDA [the U.S. Food and Drug Administration]. I mean, I could go through all of these. There are these little fiefdoms of regulatory authorities that are making these laws,” said Moore.

“So we’ve had this unconstitutional delegation of power to people who are not even elected by the people. And that’s how a lot of these laws get made.”

Moore pointed tto the Federal Reserve Board (Fed), which could tax Americans by printing money.

“The taxing authority is supposed to rest with the Congress,” said Moore. “But by printing money, the Fed is essentially taxing us, and they don’t have to go to Congress to get that done. So I regard that as an extra-constitutional delegation of power.”

The yearly Gallop governance polls show that more Americans favor a small government. There were only two exceptions since Gallop began tracing the trend 30 years ago. One happened shortly after the 9/11 terrorist attack and one during the outbreak of COVID-19 in 2020. Polls also show Democrats and Republicans have different views on government roles. During the past two years, Gallop polls show that at least 78 percent of Democrats believed the government should do more, while 15 to 22 percent of Republicans believed the same.

To reverse this trend, Americans need to be active, said Moore.

“We have to be active. It’s not just enough to vote,” said Moore. “Voting is important, and everybody should vote because that’s your one opportunity to directly affect politics. But we need to have activists. We need to have people running for office, run for school board, run for the PTA, run for local dog catcher, run for your state legislative race, or run for city council, or any position that will give you a voice on how your government works.”

“We can’t ignore government, or else they’re going to trample over us,” added Moore.

To elect Republicans is not necessarily the solution because some Republicans also like big government, said Moore.

“I am a Republican, but I don’t think Republicans are necessarily always the solution. It’s really to have citizens rise up and revolt about what’s happening. And then the politicians have to take notice. Again, we don’t work for them. They work for us.”