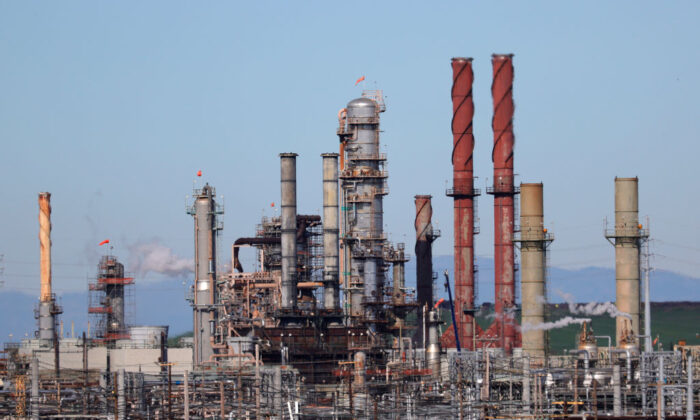 A view of the Chevron refinery in Richmond, Calif., on Nov. 17, 2021. (Justin Sullivan/Getty Images)
By Allen Zhong

High gas prices in the United States are caused by a mismatch between U.S. oil production and refining, bad policies or political hostility, and the Biden administration’s inaction, according to experts and oil industry insiders.

Inflation in the United States has been running high since March, when the yearly Consumer Price Index (CPI) reached 8.5 percent, the highest level since 1981.

A dramatic increase in energy prices has drawn special attention.

Between May and August, energy prices rose by between 20 percent to 40 percent year-over-year.

However, oil industry insiders and experts said most of those proposed measures either won’t work or won’t lower the gas prices in the United States permanently.

“Windfall profits taxes have been tried before in this country. They didn’t achieve the goal that was desired. It is pretty basic that if you want more of something, you tend not to tax it. If you want less of something, you put taxes on it,” Wirth told CNN on Sept. 13.

Oil Export Ban Could Be Disastrous

As inflation soared, Democrats have been calling for the White House to impose an oil export ban. But experts and a refinery owner warned that this won’t cut gas prices and may bring disastrous results.

Most of the oil in the recent export surge is light sweet oil, which is also known as “shale oil.” However, the refineries in the United States were designed to refine heavy crude oil, or conventional oil, Senior Vice President of the American Energy Alliance Dan Kish told The Epoch Times.

According to an analysis by the Dallas Federal Reserve, the United States exported, on average, 3 million barrels of mainly light sweet crude oil per day at the end of November 2021 and imported more than 6 million barrels of mostly heavier crude oils from Canada and other foreign suppliers each day.

The U.S. refiners don’t have the capacity to process the exported crude oil, according to the authors of the analysis.

Even if the United States bans oil exports, which are mostly shale oil, it’s impossible for refineries to update their facilities to refine shale oil after decades of political hostility against the oil industry.

Updating the facilities means that the refineries need to invest billions of dollars and get extra emission-related permits.

It’s an impossible task under the Biden administration, Kish said.

“They’ve made the fossil fuel business in North America the enemy of the people; that’s why the prices keep trending up,” he said.

“Why should anybody spend a billion, $2 billion, $3 billion, if you’re not sure of the policy of the country you’re doing business in the next 5 to 10 years? Because you have to get a return on investment. So it’s the way the United States succeeds, the way companies succeed, if you have confidence in Washington, if they have confidence in the administration that if they spend $1 billion or $2 billion, that there’s going to be return of investment,” he told The Epoch Times.

Kish said an oil export ban will have disastrous results.

“If there’s a ban on exports, what would happen is we would end up with endless amounts of oil in the Gulf Coast. The oil couldn’t efficiently be used by our refineries. In order to make those refineries take that kind of oil, we would have to invest huge amounts of money, which would drive up the price of the gasoline and the diesel on the jet fuel,” he said.

The two biggest oil companies in the United States, Exxon Mobil and Chevron, have already voiced objections to the proposed oil export ban.

“The risk in an action like that has unintended consequences. And, in fact, the U.S. is both an exporter and importer of products. An export ban runs the risk of taking supplies that are needed in other parts of [the] world and reducing those, which can drive oil prices up, which then can affect the price of imports into this country,” Wirth said, responding to a call for banning oil exports from Energy Secretary Jennifer Granholm and congressional Democrats.

Exxon CEO Darren Woods also rejected the call for an oil export ban in a letter to the Energy Department, citing the same reasons, The Wall Street Journal reported.

The only ones who would temporarily benefit from an oil export ban are those refiners who specialize in refining light sweet crude oil, according to the Dallas Federal Reserve.

However, “as the price of domestically produced crude oil declines and storage fills, it would not be long before some domestic oil producers become unprofitable and cease operations,” the analysis reads.

On his first day in the White House, President Joe Biden signed an executive order to revoke President Donald Trump’s permit for the Keystone XL Pipeline.

It turned out to be one of the most fatal moves for U.S. energy security and gas price stability because Canada is one of the most important sources of the conventional crude oil that most U.S. refineries can handle, and the Keystone XL pipeline is what’s needed to transport the Canadian crude oil.

The logical thing to do, if the Biden administration is intending to lower gas prices, is to increase the oil supplies from Canada and Alaska that work in U.S. refineries.

Both Catsimatidis and Kish pointed out that the Alaska pipeline is the key to increasing oil supplies quickly—as it can transport 2.1 million barrels per day—but is currently only moving 500,000 barrels per day.

Catsimatidis also emphasized that—to lower the gas prices in the United States—the key is to “open up North America.”

“If we open up North America for more crude oil, we’re capable of producing 20 to 21 million barrels a day with Canada,” he said. “Why are we begging Saudi Arabia, begging Russia, begging Iran, begging Venezuela for another 100,000 barrels a day when we have it here in North America? Nobody can understand why Washington is doing that.”

Another botched move against North America’s oil supply by the Biden administration is its banning of new oil and natural gas leasing on federal lands, which also produce a needed type of crude oil for the domestic market.

The ban was lifted by a U.S. appeals court in August.

Kish said a possible compromise could be the Biden administration increasing oil supplies from Canada and Alaska and designating the extra capacity to be for domestic use only.

Catsimatidis believes that if Biden opens oil production in North America, inflation will go down with the energy prices and the Federal Reserve may not need to continue making hawkish moves.

Then the U.S. economy could avoid a recession.

During this period, the Federal Reserve should be patient.

“During COVID, we were careful not to use COVID to destroy the country. Well, right now they’re destroying the country,” Catsimatisdis said, referring to the recent hawkish interest rate hikes by the Federal Reserve.

Biden can fix high gas prices facing U.S. consumers, Kish and Catsimatisdis suggested, but only if he’s willing to do so.

They doubt that Biden really has the intent to lower gas prices.

“If a person is dispassionately and objectively looking at this issue and saying ‘We would like to get prices down for Americans,’ we would go and look at where the problems are and try to solve them,” Kish said. “That’s not what we’re doing at all. In fact, it’s just the opposite. We’re closing refineries. We’re making it harder for refineries to operate here. We’re offshoring our refining capacity to other places, both India and China have been building refineries like mad.”

Catsimatisdis is concerned that the intention of the Biden administration is to promote an “incredible transition” from fossil fuel to electric vehicles, as Biden suggested in May.

“When it comes to the gas prices, we’re going through an incredible transition that is taking place that, God willing, when it’s over, we’ll be stronger and the world will be stronger and less reliant on fossil fuels when this is over,” Biden said.

Catsimatisdis said the idea is “crazy.”

“You have to laugh about it because it’s crazy. You know, we don’t have the minerals to make the batteries,” he said.

He worried that Biden’s agenda is bringing the United States down a dangerous path.

“I welcome new technology. But maybe you do it over 30 years, over 40 years. And make sure it works before you put everything else out of business … and then we find out it doesn’t work,” Catsimatisdis said.