Industry Group Calls for More US Investment in Chip Design 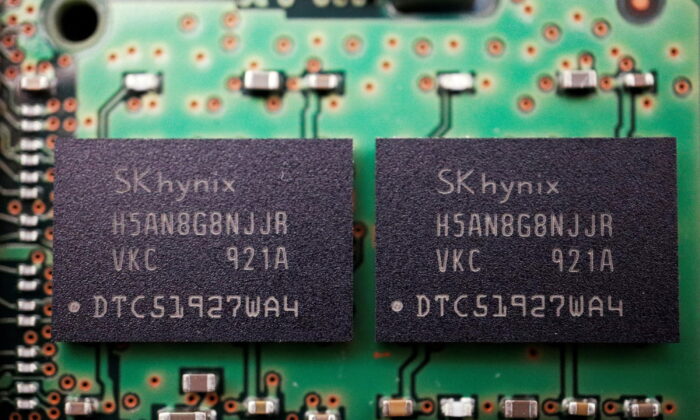 Memory chips by South Korean semiconductor supplier SK Hynix are seen on a circuit board of a computer, on Feb. 25, 2022. (Reuters/Florence Lo/Illustration/File Photo)
By Greg Isaacson

The U.S. government enacted a massive bill earlier this year directing more than $52 billion in federal investment into semiconductor research and manufacturing, with the goal of strengthening local supply chains and countering China’s rising clout in the important high-tech sector. But an industry group is calling for tens of billions in additional funding, saying more investment is needed to shore up America’s flagging dominance of chip design.

In a recent report (pdf), the Washington, D.C.-based Semiconductor Industry Association (SIA) and the Boston Consulting Group argued that federal investment of around $20–30 billion in chip design and research and development (R&D) through 2030 will help the United States maintain its current leadership of the semiconductor design industry. That sum includes $15–20 billion for an investment tax credit focused on chip design.

“America’s current incentive is weaker than incentives offered by our global competitors and should be strengthened,” the association said in a statement.

Chip design is a crucial and expensive part of the semiconductor value chain, which also includes R&D, manufacturing, assembly, testing, and packaging. Worldwide semiconductor sales totaled $556 billion in 2021, with semiconductor design accounting for about half of all R&D investment and value add in the industry, according to the SIA’s report.

While the United States is the traditional leader of the global chip design industry, the country’s market leadership is eroding in the face of several challenges, including rising investment needs, dwindling supply of talent, and disrupted access to global markets.

One of the headwinds faced by the industry is soaring costs; between 2006 and 2020, the cost of designing a new chip on the latest technology node jumped more than 18-fold. Although America’s private sector plows more money into design R&D than any other private sector in the world, public investment lags behind.

According to the SIA, public investment funds 13 percent of overall semiconductor-specific design and R&D in the United States, compared to an average of 30 percent across Europe, China, Taiwan, Japan, and South Korea.

The CHIPS and Science Act signed into law by President Joe Biden in August earmarks $280 billion for a wide range of projects over five years, including some $52 billion designed to increase the production of semiconductors in the United States. Most of the semiconductor-related funds will come from grants, loan guarantees, and a 25 percent investment tax credit for domestic chip manufacturing.

The bill has attracted controversy, with some critics pointing to its huge price tag and its mix of spending unrelated to America’s chip industry. Sen. Rick Scott (R-Fla.), for example, described the bill as “taxpayer-funded corporate welfare to the world’s most profitable corporations” that lacked accountability or a guaranteed return on investment for the American public.