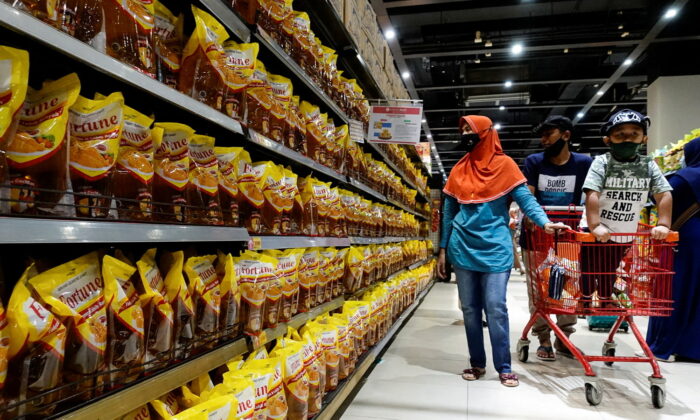 People shop for cooking oil made from oil palms at a supermarket in Jakarta, Indonesia, on March 27, 2022. (Willy Kurniawan/Reuters)
Asia & Pacific

Indonesia has widened the scope of its export ban on raw materials for cooking oil to include crude and refined palm oil. This comes just a day after its Chief Economic Minister said the ban will only cover refined, bleached, and deodorized palm olein.

In a statement, Lutfi said the export ban will last until prices of bulk cooking oil drop to 14,000 rupiahs ($0.97) per liter. Trade Ministry data showed that the retail price for bulk cooking oil is around 18,000 rupiah ($1.24).

“Exporters who violate the policy will be given strict sanctions in accordance with existing rules and regulations. The government and law enforcement officers will closely monitor the policy implementation,” he added.

Lutfi said the palm oil export ban also applies to all Indonesian customs areas, as well as the free trade and free port (KPBPB), which includes the Batam, Bintan, Karimun, and Sabang provinces.

Exporters who have secured customs declaration by April 27 will still be able to export, he noted, adding that the export ban would be reviewed monthly or as often as needed.

“This temporary export ban aims to ensure the availability of raw materials and domestic supplies of cooking oil, as well as to keep the price of cooking oil affordable. I hope we can all recognize the urgency of this policy and cooperate for the benefit of the people,” he added.

Indonesian President Joko Widodo said Wednesday that the palm oil industry must first ensure that domestic demand for cooking oil is met before the government can lift the export ban.

Jokowi, as the president is popularly known, said that Indonesia has enough capacity to meet domestic demand and it was “ironic” that the world’s top palm oil producer is facing cooking oil shortages.

“Once domestic needs have been met, I will lift the export ban because I know the country needs taxes, foreign exchange, a trade balance surplus. But meeting the people’s basic needs is a more important priority,” Joko said.

Palm oil futures on the Malaysian exchange surged by 9.8 percent on Wednesday, as some market participants feared exporters in Indonesia could not get their products onboard vessels in time before the ban took effect.

Jokowi urged authorities to conduct a full probe into the corruption case, which he said has resulted in a shortage of cooking oil and soaring prices in the country.

“The attorney general’s office has determined four suspects in the cooking oil cases, and I demand [authorities] to investigate until it is finished. So we can find out who is playing around [with the crude palm oil export],” he said in a video broadcast on April 20.