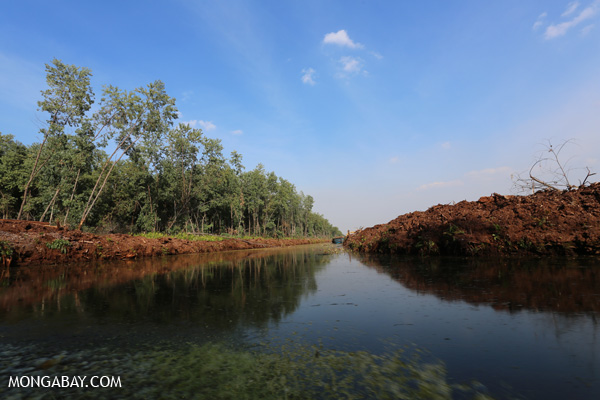 The Indonesian Ministry of the Environment and Forestry has announced it will further hobble its peatlands protection law to allow plantations to continue operating on a business as usual basis.

Indonesian law number 71/2014 on the protection of peatland ecosystems was passed late last year amid protests by both environmental groups who felt the law did not do enough, and industry activists who claim the law will significantly harm their business and the Indonesian economy.

At the center of the debate is the law’s definition of what constitutes human induced degradation of peat. Article 23 section 3 states that peat is considered damaged if a) the ground water is more than 0.4 meters (1.3 feet) below the surface, and/or b) mineral soil below the peat is exposed.

Scientists and environmental groups say the 40 cm standard is based more on crop yields than on recommendations of peatlands science. Drainage to any level will result in subsidence, loss of stored carbon, and increase risk of fire and further degradation. And this loss happens quickly. One case study by the Malaysian Palm Oil Board in Sarawak found that a 100-400 cm deep peat swamp subsided 29 cm in the first year after being drained.

However, regardless of where the 40 cm number originated, millions of hectares of plantations found in peatlands do not—and can not—meet even that standard. Most timber crops grown on plantations are dryland species that can not tolerate water levels higher than 0.6 – 0.8 meters below the surface. Acacia roots require at least 0.8 – 1 meter of dry soil in order to survive—more than that, and the trees will drown. Therefore, plantation owners are rightly concerned that if they comply with the law, they would be forced to flood and kill vast tracts of productive plantations.

The Association of Indonesian Forest Concessionaires (APHI) claims that raising the water level to the 40 cm standard will kill 1.7 million hectares of acacia plantations, resulting in Rp103 trillion ($8.1 billion) in economic damages and the loss of 300,000 jobs.

The Indonesian Palm Oil Association (Gapki) echo these concerns. Although oil palm trees are more tolerant of soil saturation, the highest yields are achieved at water levels of 50-75 cm. Keeping the water table at 25-50 cm could result in up to a ten percent reduction in yield.

“The provision will impact 1.7 million hectares of oil palm plantations in peatlands,” said Joko Supriyono, the Secretary General of Gapki. He claims that the law will result in Rp256 trillion ($20 billion) in losses to the palm oil industry.

Amid these protests from the business community, the Environment and Forestry Ministry has confirmed it will revise the standard, as reported by the Jakarta Post.

She confirmed that although the ministry would not be issuing any new permits to convert peatlands, those companies that already have permits and have been operating in peatlands would be allowed to continue.

Only 49 percent of Indonesia’s historic peat swamp remains forested, and of that, less than 10 percent is considered pristine. In Indonesia, peatlands have higher deforestation rates than any other type of rain forest, with the possible exception of mangroves.