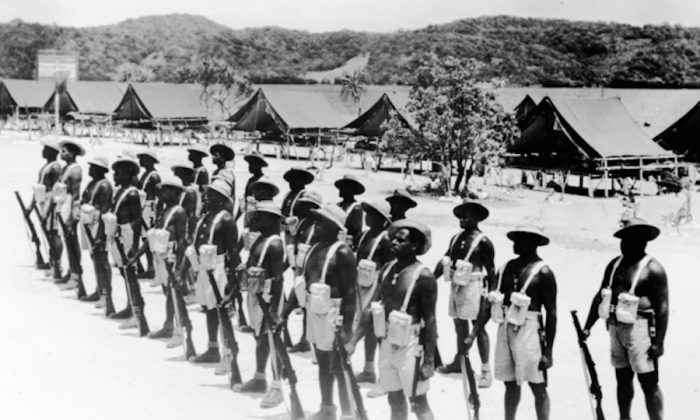 Indigenous Diggers to Tell Their Stories

SYDNEY—Aboriginal and Torres Strait Islander soldiers were a formidable force during the first and second world wars, fighting alongside their white counterparts and sharing the same pay and conditions.

When they returned home they expected to be treated the same. But they were deprived of the most basic rights—the right to vote, buy property or even enter a public bar.

After laying down their lives for their country, they returned to the same discriminatory policies prevalent at the time, said Professor Mick Dodson, director of the National Center for Indigenous Studies at the Australian National University (ANU).

“They were still under restrictive legislation, and had government officials and missionaries and others totally controlling their lives,” he said.

Despite fighting in all major conflicts and serving in peacekeeping and defence support roles, indigenous Australians have been largely ignored, says Dr Dodson. In an effort to address the disparity, he is now heading a project that will document the stories and the history of Aboriginal and Torres Strait Islander people who fought for Australia from the Boer War until 2000.

Launched Wednesday March 26, the Serving Our Country research project will coordinate Community Yarn Ups to track down and record oral and video histories, and document letters and papers of indigenous ex-servicemen and servicewomen around Australia.

Despite bans on Non-Europeans enlisting during the two world wars, around 1000 indigenous Australians (out of an estimated 80,000 indigenous population at the time) found ways to avoid the prohibition and enlist during World War I.

“We had a defence act then and it persisted through the late ’40s that prohibited Aboriginal people from enlisting, so many slipped through or lied about who they were or lied about their age,” Mr Dodson told the ABC.

Many of them around, around 10 per cent, joined the much lauded Australian Light Horse Brigade, the 11th Light Horse Regiment composed of so many men of aboriginal origin it became jokingly known as the “Black Watch”, according to records in the Australian War Memorial.

The Torres Strait had the highest rate of volunteers anywhere in Australia during WWII, said Gary Oakley, indigenous liaison officer with the Australian War Memorial.

In WWII, around 3000 indigenous Australians are estimated to have enlisted, again receiving the same wages and conditions as their fellow white soldiers.

According to Mr Oakley, the Australian Defence Force was one of the few institutions that afforded indigenous Australians equal rights at the time.

“The Army was Australia’s first equal-opportunity employer,” he said in a statement.

No matter how and in what conditions they fought, however, it was not until 1967 that indigenous Australians were recognised as citizens. Many returned home to little support and horrendous conditions.

“The impact of the war wasn’t just the battlefield,” Dodson said.

Aboriginal service people did not receive the same benefits as their white counterparts on their return, and were denied both defence homes and soldier settlement blocks. Some also returned to find that their children had been forcibly removed and put into state care as part of the Stolen Generation.

“That’s the biggest disappointment, that they were good enough to go and put their lives on the line—and many of them died—but not good enough to be treated equally when they came home,” Mr Dodson said.

While many of the stories gathered will be stored at the Australian War Memorial for future generations, Mr Dodson believes there will also be a cathartic effect in the telling.

“I guess it’s a vindication of the experience of themselves and their family members, particularly if it’s been a rough ride,” he said.