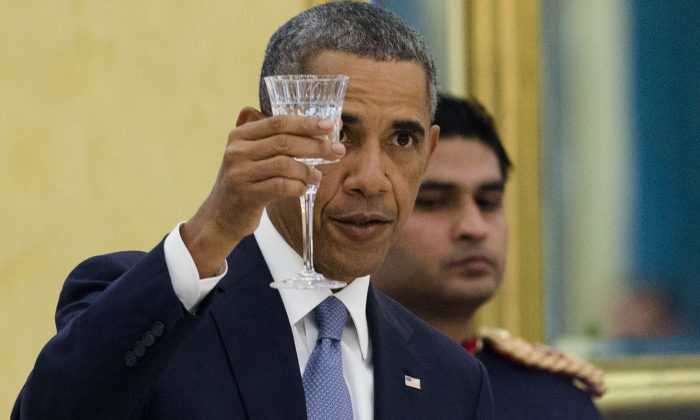 US President Barack Obama makes a toast during a State Dinner at Rashtrapati Bhawan, the Presidential Palace, in New Delhi, India, on Jan. 25, 2015. The United States and India resolved several key obstacles in an agreement that would allow US companies to build up to $182 billion in atomic power plants and reactors in India. (SAUL LOEB/AFP/Getty Images)
Asia & Pacific

For India’s Prime Minister Narendra Modi, the agreement inked on his country’s soil with President Barack Obama on Sunday has the potential to deliver the power generation he needs to fuel his dream of a manufacturing revival in India, one that can steer the fortunes of millions away from destitute poverty.

For the United States, the civil nuclear deal paves the way for U.S. companies to build an estimated $182 billion in atomic power plants and reactors in the world’s largest democracy, according to Bloomberg. Currently sixty percent of the country’s energy is produced by burning coal.

Nuclear reactors now generate just 3 percent of India’s power, but the energy-starved country may reach for upwards of 25 percent by 2050, according to Ashok Sharma, an honorary research fellow of politics and international relations at the University of Auckland, writing in the Epoch Times.

However, U.S. business engagement has been held up over issues of liability should a nuclear accident occur, and a demand on the part of the United States to track nuclear material supplied to India.

The U.S. tracking clause went beyond what international protocol requires.

It was a contentious sticking point for India’s sovereignty, and Obama’s willingness to withdraw it went far in opening up the agreement.

The liability issue, however, was potentially even more contentious for both sides.

Indian law, prompted by a deeply painful chemical leak disaster in Bhopal, India, where more than 10,000 people were killed or injured, allows suppliers to be sued in the event of a nuclear accident.

International norms have the operator liable, but in India all power plants are run by the state-owned Nuclear Power Corporation of India Ltd., and that means the government would be on the hook in the event of a disaster.

The vague agreement reached on Sunday involves a liability fund set up by the Indian government to cover accident expenses. New legislation is not required.

The leaders invited U.S. corporations, such as General Electric Co. and Westinghouse Electric Co., to conduct their own risk assessments to determine whether the political arrangement is satisfactory.

India Today, an established weekly current affairs magazine, is calling the agreement a centerpiece of a transformed relationship between the two countries.

Modi publicly credited Obama with setting the tone for the deal last November during his visit to the United States. He was also effusive toward Obama, calling him Barack, and highlighting the personal “chemistry” that had brought the two countries closer.

He then told reporters during a press conference on Sunday that he had worked “with a sense of purpose … to make sure the deal is taken forward.”

The United States sees the world’s largest democracy as a counterpoint in Asia to China’s growing influence, but relations between India and the United States have been slow to develop as India’s leaders have largely focused on an insular agenda.

In an article titled “Nuke deal sealed: 10 things which show we are moving the United States way,” India Today remarked on their new leaders dispensing with past barriers to cooperation.

“With the nuke deal sealed, PM Modi has clearly put a stamp that non-alignment as India’s foreign policy is passé,” the article stated.

Non-alignment is a principle articulated by India’s first Prime Minister Jawaharlal Nehru after independence that cautions against alignment with any superpower, particularly the United States.

“Perhaps, the Prime Minister has realized that India can’t wage a lonely battle on behalf of developing nations,” wrote Dua.