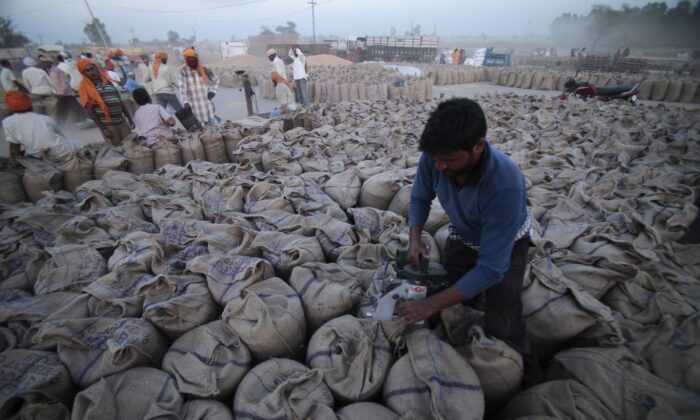 India has banned wheat exports, citing heightened risk to food security in the country and some of its neighbors arising from a sudden spike in the global prices of wheat.

The move seeks to address the difficulty India and other vulnerable developing countries are having in accessing adequate wheat supplies, India’s Directorate of Foreign Trade said in a government publication (pdf) on May 13.

Citing “many factors” behind surging wheat prices, which have risen by more than 40 percent this year, the agency said the ban was effective immediately, with exceptions allowed for shipments backed by letters of credit issued prior to the May 13 notice and on a case-by-case basis at the request of countries “to meet their food security needs.”

India, the world’s second-largest producer of wheat, had a goal to export 10 million tons of wheat through 2023. It’s unclear how much of that will still be exported under the wheat ban exceptions.

The export ban is likely to have a cooling effect on domestic wheat prices in India, which have risen to their highest level on record. At the same time, reduced supplies from India could push up prices in global markets.

“The ban is shocking,” a Mumbai-based dealer with a global trading company told Reuters. “We were expecting curbs on exports after two to three months, but it seems like the inflation numbers changed the government’s mind.”

Inflation, which has emerged as a global phenomenon, has climbed in India to an eight-year high.

One of the factors likely figuring into the ban was a stunted wheat harvest in India due to a record-breaking heat wave.

Another is the Russia–Ukraine conflict, which has led to a naval blockade of Ukraine’s Black Sea ports, a key point of transit for Ukrainian grain exports.

India’s wheat export ban comes days after the United Nations’ Food and Agriculture Organization (FAO) called for more investment in innovation to bolster food security. Citing data indicating that up to 40 percent of food crops each year are lost due to plant pests and diseases, the FAO called on governments and academics to ramp up efforts in the area of plant health innovation.

The main priorities for these food security-enhancing efforts include boosting innovation in the areas of pesticides and pest management, as well as bolstering the health of soils, seeds, and pollinators.

Earlier, the FAO warned of a looming global food crisis, with supplies of key staple crops—including wheat—threatened by the Russia–Ukraine conflict.

Russia and Ukraine are key exporters of grain, supplying nearly 30 percent of wheat and nearly 20 percent of corn in the global market.

The war in Ukraine is turning “the breadbasket of the world to breadlines” for millions of its people, according to David Beasley, executive director of the U.N. World Food Program, who made the remarks in late March before the U.N. Security Council.

The World Food Program buys 50 percent of its grain from Ukraine, Beasley said at the time.