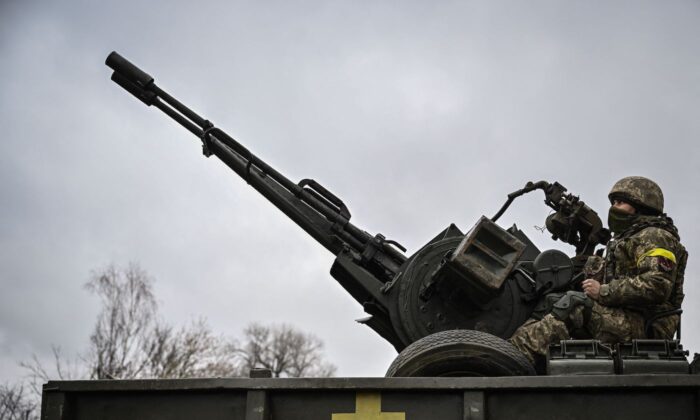 A Ukrainian soldier keeps position sitting on a ZU-23-2 anti-aircraft gun at a frontline, northeast of Kyiv on March 3, 2022. (Aris Messinis/AFP via Getty Images)
Viewpoints

Politicians react and often too late—that’s the unfortunate historical record. Politicians in democracies tend to be risk-averse, fettered by political and media perception (often expressed by the term “maintaining political viability”). The pols don’t want to get ahead of mainstream media opinion.

Driven by insight and often sheer genius, entrepreneurs and inventors create and act, sometimes years before markets demand their services and inventions.

Biden: “… I need not tell you the perception around the world and in parts of Afghanistan, I believe, is that things aren’t going well in terms of the fight against the Taliban. And there’s a need, whether it is true or not, there is a need to project a different picture.”

A political perception Biden desired took precedence over addressing the mess he created.

The Polish transfer of MiG-29s to Ukraine differs from the Afghanistan situation, but once again we see Biden reactive and risk-averse. As I write this column the deal appears to be dead. My opinion: why weren’t the planes transferred a week ago?

The mega-manufacturers today are fettered by MBAs beholden to annual reports and stockholder dividends. Don’t buy the PR. Inventive engineering and product performance take a back seat. Money is thrown at mediocre systems. Why do we keep trying to fix the Navy’s littoral combat ship (LCS) and give them missions? Sailors call them Little Crappy Ships.

In World War II, America benefited from creativity by inventors and designers who ran their businesses. Howard Hughes is probably the premier example. He funded his own projects. The Douglas Aircraft Company was run by its founder, Donald Douglas Sr. Boeing was once run by William Boeing, who designed aircraft. He was a slick businessman, but he also knew how to build great planes. It was an American company. Now Boeing is a multinational that has absorbed Douglas and McDonnell.

Unfettered entrepreneurs and industrialists are responding to the Ukraine invasion—and I hear a positive echo of WWII.

SpaceX and Tesla magnate Elon Musk is providing the Ukrainian people with internet and communication service via SpaceX’s Starlink satellites. He is sending Starlink terminals to Ukraine. What individual agility.

I’ll add another independent actor who funds his own industrial design shop: a Texan friend of mine named George Hamilton. He called me, expressed admiration for Childress, and said he’s involved in discussions to send Ukraine a thousand of his Hamilton 300 rifles. They have a range of 1700 meters.

Hamilton also designs aircraft and fast attack warships. Full disclosure: I’m impressed with his Hamilton 96 Escort Boat’s potential to meet a genuine security need, but so is Forbes magazine. In December 2020 Forbes columnist David Blackmon wrote: “Hamilton envisions his vessel as a private force multiplier similar to other force multipliers the U.S. has commissioned in every conflict since Teddy Roosevelt led the Rough Riders in the Spanish American War.” However, permitting that requires legislation and “Congress almost always waits until a crisis or disaster has taken place before taking any real action. It is an almost wholly responsive entity.”

Reread this column’s intro. Blackmon and I are on the same page.