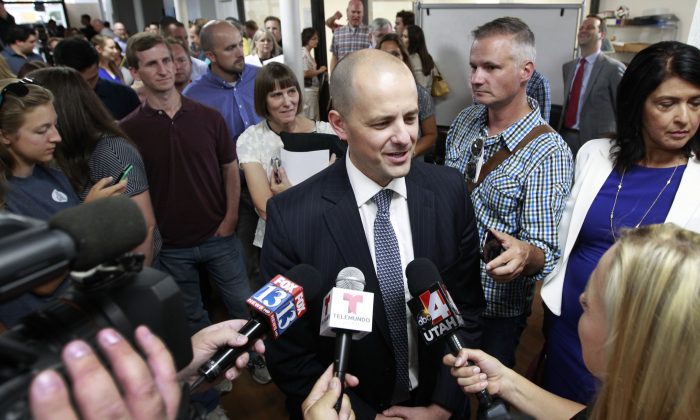 A temporary name that independent presidential candidate Evan McMullin used on his applications to be included on state ballots might now be permanent.

The name “Nathan Johnson” is listed as McMullin’s vice-presidential pick in all nine states where he has made it on the ballot so far.

McMullin’s senior adviser and chief communications officer, Rick Wilson, said that the name was only a placeholder, and that their legal teams were aware of the situation. However, eight of the nine states say that it’s impossible to take Johnson’s name off the official ticket.

“I don’t personally know the guy. He’s somebody that they vetted as a placeholder. That’s all it is,” Wilson told Politico.

“We thought it would be inappropriate to just grab the first person that walked off the street instead of vetting them, which is what we’re doing,” Wilson continued. “We will have a V.P. nomination.”

But a press secretary for the Louisiana secretary of state’s office said that “it cannot be changed.”

McMullin’s vice presidential predicament in Louisiana carries over to other states, including Utah, Arkansas, Idaho, Iowa, Minnesota, South Carolina, and Virginia, as top election officials in each state told Politico.

Virginia had an option to change the name on the ticket, but that due-date passed on Friday, Sept. 2.

Lynn Bartels, spokeswoman for the Colorado secretary of state’s office said that McMullin’s campaign had until Friday to change the name.

The Independent candidate—a former House Republican staffer and CIA veteran—announced his bid for presidency on Aug. 10 as an alternative to Hillary Clinton and Donald Trump.

Since the announcement, he has struggled to gain name recognition or traction in the polls, and most polls don’t have him as an option.

In an August interview with Politico, McMullin said that the campaign was in the early stage of picking a running mate.

McMullin only said it could be either a current or former elected official, but ideally it would be someone who is “right of center.”