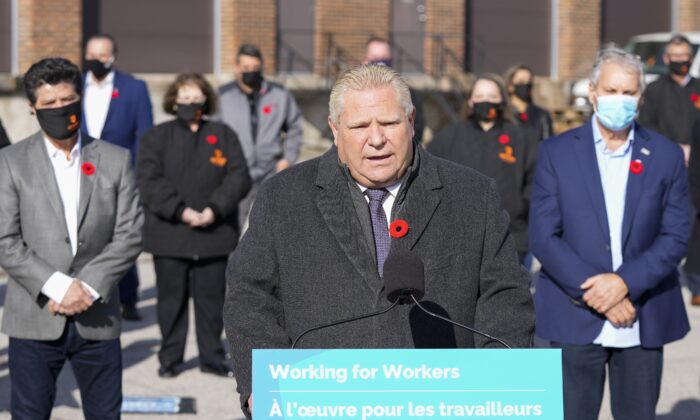 Ontario Premier Doug Ford announces an increase to the minimum wage to $15 an hour at a press conference in Milton, Ont., on Nov. 2, 2021. (The Canadian Press/Nathan Denette)
Viewpoints

Increasing the Minimum Wage Hurts Those It Aims to Help

Ontario Premier Doug Ford hiking the minimum wage thrills liberals and socialists because they think those fusty, hard-hearted Tories, in jettisoning obsolete economic theory for compassion, are admitting they were right all along. And it thrills conservatives to give up defending unpopular ideas because they think they’ll stop being treated as social lepers. So it might rather spoil the mood to point out that, economically, the move is rubbish.

Listen to the premier’s oily rationale: “I’ve always said workers deserve to have more money in their pockets because they earned it. They’ve worked hard and put in long hours, the least the government can do is ensure we’re making life more affordable for them.” None of which is true. Not even the bit about long hours, because many minimum wage earners are part time, and it matters.

As so often, I’m reminded of one of Henry Hazlitt’s most requotable lines: “A mere recital of the economic policies of governments all over the world is calculated to cause any serious student of economics to throw up his hands in despair.” And it hasn’t gotten better since he continued, back in 1946, “What possible point can there be … in discussing refinements and advances in economic theory, when popular thought and the actual policies of governments … have not yet caught up with Adam Smith?” Not that Ford is even trying.

If he were, he’d understand that if you increase the price of something, people buy less of it. Whether it’s online music, roofing tiles, or unskilled labour, the more it costs, the more people try to find substitutes. Like, oh, I don’t know, automated ordering screens in fast food restaurants. Minimum wages hurt the people they try to help.

Moreover, as P.J. O’Rourke wrote 30 years ago, “the wildest hippie and the sternest member of the Politburo shared the same daydream: that a thing might somehow be worth other than what people will give for it.” So it’s also not true that workers were paid less than they “earned” until the government came along and gave it to them. Some employers may have hearts of stone and wallets to match. But others desperate for talented and diligent workers bid away the good ones, and the bad, mean businesses fold.

Markets aren’t perfect. But if you think government is, I can’t help you. For everyone else, the fact that some people’s labour is not worth as much as we, or they, would like cannot be fixed by pretending it is and trying to force others to do likewise. It can be made better by increasing their opportunities. But this phrase doesn’t primarily mean government training. It means clearing away obstacles like artificially high minimum wages that stop people from finding work at all, so they can’t improve their skills and get a raise, promotion, or better job.

Nor is it true that “workers” will have more money in their folksy “pockets,” because pushing up the price of your labour sounds great, if you keep your job, until you realize everyone else’s rises too. As Hazlitt also famously said, “The art of economics consists in looking not merely at the immediate but at the longer effects of any act or policy; it consists in tracing the consequences of that policy not merely for one group but for all groups.”

So if you want to get all factual, detail-oriented, and not-fun, the Fraser Institute’s Ben Eisen and Milagros Palacios wrote last month: “One of the most common arguments in favour of raising the minimum wage is that doing so will help reduce poverty.” But, they say, even “if we disregard the possible negative effects on employment levels” (which parenthetically is a big “if”), it only works “if minimum wage workers are heavily concentrated in low-income households.”

They’re not. Instead, 8.8 percent of all Canadian workers apparently earn minimum wage but only 7.7 percent of that 8.8 percent live in households below the Statistics Canada low income cut-off line.

These jobs aren’t careers. They’re stepping-stones to careers, or extra family money. And Ford just made them harder to get onto. Which benefits nobody but organized labour, the real Scrooge here, greedily rigging labour markets so those already doing well can do better at the expense of the marginalized.

If Ford thinks he can raise everyone’s income by regulatory fiat, he’s an even bigger fool than he sounded above. If he’s just pretending to buy votes, ditto because the union bosses won’t back him next time either.