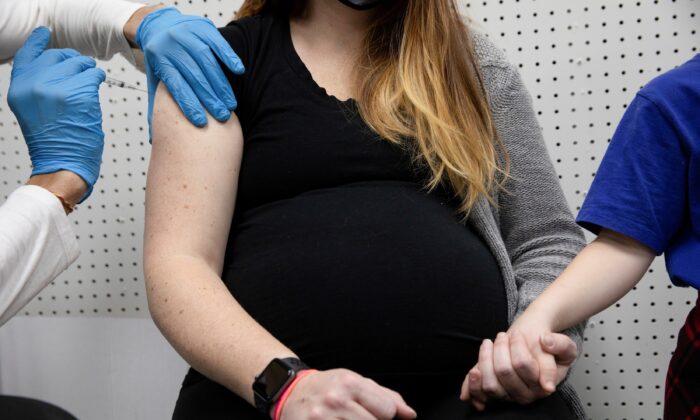 Increased menstrual bleeding was linked to COVID-19 vaccines in a new study.

Approximately 42 percent of respondents in a survey about post-vaccination menstruation with a regular period reported bleeding more heavily than usual after getting a vaccine, according to the study, published in Science Advances after peer review on July 15.

A majority of respondents who were not menstruating, meanwhile, reported breakthrough bleeding after getting one of the vaccines, including 66 percent of post-menopausal women who were not taking a hormonal treatment and 65.7 percent of those who were using one or more treatments.

Over 128,000 responses came in, but many were excluded for reasons such as being diagnosed with COVID-19, not fully completing the survey, or not reporting at least 14 days after their final dose of a primary series.

Additionally, women aged 45 to 55 were excluded in order to avoid including women going through perimenopause.

“We focused our analysis on those who regularly menstruate and those who do not currently menstruate but have in the past. The latter group included postmenopausal individuals and those on hormonal therapies that suppress menstruation, for whom bleeding is especially surprising,” Kathryn Clancy, a professor of anthropology at the University of Illinois Urbana-Champaign, said in a statement.

She led the research with Katharine Lee, an anthropology professor at Tulane University.

‘We Don’t Tend to Talk About It Publicly’

The researchers said that women began sharing instances of unexpected bleeding after getting COVID-19 vaccines in early 2021, but that doctors who responded often quickly dismissed the experiences.

Limitations of the study include that women self-reported through the survey, but Clancy and others involved said the trends uncovered by the results can help trigger further research and spur discussion on the matter.

“Menstruation is a regular process that responds to all kinds of immune and energetic stressors, and people notice changes to their bleeding patterns, yet we don’t tend to talk about it publicly,” Lee said in a statement.

Most respondents received a Pfizer or Moderna vaccine, but others received the other shots, such as those from AstraZeneca, Novavax, and Johnson & Johnson.

The U.S. Centers for Disease Control and Prevention says that women who menstruate may experience “small, temporary changes” in menstruation after COVID-19 vaccination, pointing to a January U.S. study that concluded the vaccines were associated with a change in cycle length and research from Norway published the same month that found “a significant increase” in menstrual irregularities following vaccination, particularly after a second dose.

Nearly 300 women participating in another observational study, published in May, reported menstrual irregularities.

The European Medicines Agency earlier this year launched an investigation into reports of the COVID-19 vaccines being linked to menstrual changes. The agency concluded the Pfizer and Moderna vaccines, both built on messenger RNA technology, do not cause an absence of menstruation. The committee is still probing possible links to heavier periods.