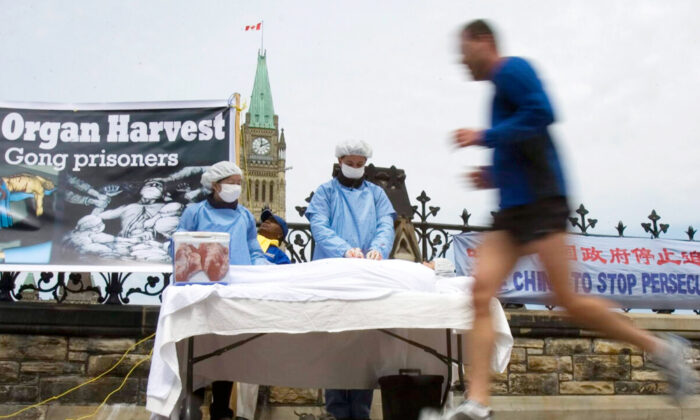 The Winter Olympics is 'offering China a chance to ‘sportswash’ its reputation,' the group says
By Peta Evans

How is it that a human-rights violator has come to be hosting the Winter Olympics at this moment? This is the question put to the International Olympic Committee (IOC) and participating governments and sponsors of the Games by an NGO involved with investigation and outreach over China’s billion-dollar, state-sanctioned murder-for-organs industry.

The Chinese Communist Party (CCP) was in 2019 found proven by the China Tribunal to be forcibly harvesting organs from prisoners of conscience on a significant scale, with the organs being sold for profit to unsuspecting “donor” recipients from all over the world.

Since the tribunal’s judgment was handed down, nonprofit The International Coalition to End Transplant Abuse in China (ETAC) has worked to bring awareness and action to the issue, and on Jan. 29 published on its website a statement on the Beijing 2022 Olympics.

In its statement, ETAC called for participating governments and sponsors to withdraw their support for the Beijing Games, citing “forced organ harvesting, forced sterilization, forced labor, arbitrary detention, and murder” as ongoing abuses committed by the CCP that amount to “crimes against humanity and genocide.”

“The Winter Olympics is a distraction from these abuses, offering China a chance to ‘sportswash’ its reputation and distract from the atrocities that continue to take place,” Rogers stated, adding that “any government, company, or sponsor who participates in them implicitly condones China’s criminal actions.”

Sir Geoffrey Nice QC, chair of the China Tribunal—a London-based, independent people’s tribunal that heard evidence on forced organ harvesting from over 50 fact witnesses, investigators, and experts between December 2018 and April 2019—concluded in his judgment that “commission of crimes against humanity against the Falun Gong and Uyghurs has been proved beyond reasonable doubt,” and that “forced organ harvesting has been committed for years throughout China on a significant scale.”

The tribunal found that the main source of organ supply has been practitioners of Falun Gong (Falun Dafa), a self-cultivation practice of mind and body incorporating meditative exercises and moral teachings based on the principles of “truthfulness, compassion, and tolerance.” Followers of the practice have been the subject of a relentless persecution campaign by the CCP since 1999.

The judgment also concluded that “governments and any who interact in any substantial way with the PRC [People’s Republic of China] … should now recognize that they are … interacting with a criminal state.”

Rogers stated that, because the Chinese regime has continued to commit crimes against innocent people for their faith or ethnicity, including killing prisoners of conscience for their organs, “the IOC should not have considered Beijing as a potential Olympic host.”

“It is incomprehensible that Beijing qualified to hold the Winter Olympics,” she said.

“We call on the IOC to have more stringent conditions for nations to qualify as Olympic Games hosts, and to exclude States that engage in crimes against humanity or genocide.”

The IOC did not immediately respond to requests for comment.

Peta Evans
Follow
Peta Evans is a writer for The Epoch Times. She covers inspiring stories about people, tradition, and human rights.