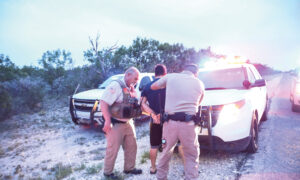 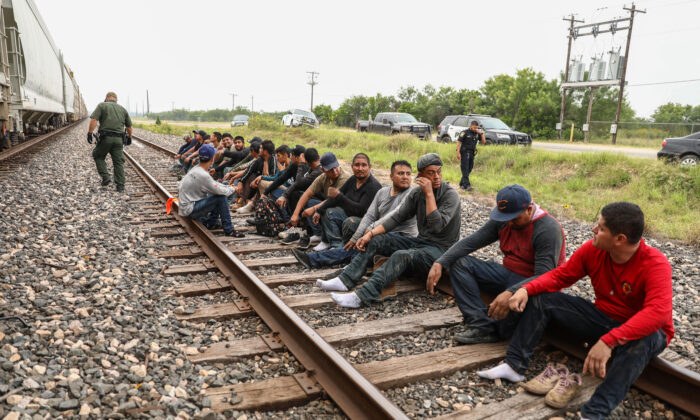 In Texas, Waves of Illegal Immigrants Pulled Off Trains

A Border Patrol inspection area 60 miles from the border is so busy that agents are constantly running low on handcuffs and transport options.

On June 21, Border Patrol agents in Uvalde were already spread thin in dealing with three vehicles full of illegal aliens who had tried to evade state troopers and eventually stopped and scattered.

At the train inspection area, an eastbound train heading to San Antonio approaches and slows down. A National Guard member is next to the tracks up on a platform that looks over the top of the train. The guardsmen communicate directly with the Border Patrol agents on the ground when they spot people, broken locks, or open compartments.

A common sight as a train slowly grinds to a halt is a stream of illegal aliens jumping off the train and haphazardly running across the road into the brush, or down a street to disappear into a neighborhood. Agents give chase, but catching more than one person per agent gets tricky as the aliens scatter and hide. Agents with K-9s are the most effective, but they’re not always available and they also have to focus on finding people hidden on the train.

The illegal aliens in the grain hoppers generally can’t get out unless someone on the outside of the train cranks open the bottom plate. They get in by cutting the locking wire on the lid, dropping in, and closing the lid. It’s dark and gets extremely hot.

The 21 illegal aliens found in a grain hopper on June 21 had a strip of webbing placed from the lid down to the bottom—presumably to help them drop in and to provide a lifeline in case they needed to get out.

BORDER THREAD: Border Patrol stops train near Uvalde that are coming from Mexico via border town Eagle Pass in Texas.

Of the four trains stopped by Border Patrol in a five-hour window, agents apprehended at least 43 illegal aliens. Several more got away. All but two were male, and aside from a few Hondurans, most were from Mexico. Several carried knives.

The illegal border crossing recidivism rate is currently more than double that of previous years. In May, 38 percent of Border Patrol apprehensions were individuals who had at least one prior encounter in the previous 12 months, according to Customs and Border Protection (CBP). The average one-year reencounter rate during the previous five years was roughly 15 percent, CBP said.

The number of illegal border crossings has been rising steadily since last October and surged in February after President Joe Biden took office.

In May, CBP apprehended 180,034 individuals illegally entering the United States, the highest number in a single month in 21 years.

The agency said the majority, more than 112,000, were expelled under the Title 42 emergency health provision, which is currently in place until July 21.

In the same month, at least 51,000 illegal aliens evaded apprehension after being detected by Border Patrol, according to numbers obtained by The Epoch Times.

It’s not just the trains from Eagle Pass to Uvalde. All day and night, freight trains also exit Mexico into the U.S. cities of El Paso, Laredo, and Brownsville. The illegal aliens often board after the trains have been scanned or X-rayed at the U.S. port of entry.

On June 9, Border Patrol apprehended nine illegal aliens attempting to board a train near Port Laredo. The following day, as agents were apprehending three others, a woman fell while trying to get onto a moving train.

“Before agents could reach her, she lost her grip and fell under the train. The train caused severe injuries to her foot,” the CBP stated in a release.

On June 5, at an inspection site in Hebbronville, Texas, Border Patrol agents found 25 Salvadorans in a grain hopper “with no means to escape,” according to the CBP.

“This dangerous method of traveling further into the United States after illegal entry is strongly discouraged as it often results in serious injury or death,” the CBP stated in a June 22 press release.

Border Patrol apprehended 24 adults from Mexico and Guatemala who were inside a grain hopper near Corpus Christi on May 10.

The Epoch Times requested from CBP the number of illegal aliens apprehended from trains so far this year, but didn’t receive the information by press time.

Texas Gov. Greg Abbott and Arizona Gov. Doug Ducey issued a call for help to other governors on June 10.

Correction: A previous version of this article erroneously stated that the Kentucky governor had pledged to send support to Texas to help with border issues.