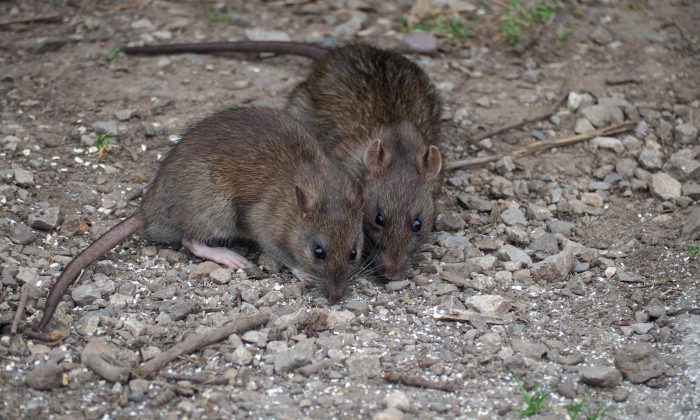 NYC Is Winning Some Battles Against Rats, but War Far From Over

NEW YORK—Most rat experts refuse to hazard a guess at how many of the critters reside in New York City.

Not Danisa Arias, one of the fearless warriors assigned to the rat armageddon project, “Attacking Rat Reservoirs.”

She estimates the city could contain “pretty much close to one rat per person,” although she admitted no one knows the true count.

Arias is part of a team from the Department of Health and Mental Hygiene (DOHMH) dedicated to obliterating the breeding grounds of the furry rodent Rattus norvegicus (aka Norway rat).

Rat reservoirs are anywhere rats can happily live, eat, and drink—which describes a lot of places in the Big Apple.

Many sidewalks are hollow, gardens are conveniently dotted throughout the five boroughs, dumpsters are prolific, and garbage is ubiquitous.

“Uncontained garbage is what’s driving the rat problem,” said Caroline Bragdon, a rat expert with DOHMH, and “rat czar” according to some. “A lot of times it’s the city-owned properties that have the problems.”

Bragdon and her team of rat busters started with $600,000 and nine neighborhoods with serious rat issues. New York City Mayor Bill de Blasio was happy with the pilot program’s success and granted the team another $2 million and 40 neighborhoods to extend their rat-fighting capabilities.

One hotspot on the rodent radar is in Chelsea. Wide-ranging inspections for rat activity in the area resulted in a nine-street zone that the rat team is zeroing in on.

Of the 469 properties inspected, 16.6 percent failed—meaning they showed signs of rat activity. Bragdon said anything under 5 percent is a success story, whereas anything over 10 percent is “worrying.”

In Chinatown, the team has seen a whopping 90 percent reduction in rat burrows in two rat reservoir areas—Columbus Park and Kimlau Square, according to the DOHMH.

An online “Rat Information Portal” logs all inspections—passes and fails. It’s possible to look up a specific address, a neighborhood, a zip code, or a whole district.

Rodents, which carry a variety of diseases, are particularly concerning in restaurants. So far this year, of the 7,756 restaurants that have been inspected in Manhattan, 23 percent showed signs of active rats or mice.

In a property inspection, the team looks for paths and holes leading into buildings (rats can squeeze through holes the size of a quarter), uncontained trash, evidence of chewing, telltale piles of feces, and burrows in the ground.

Each burrow houses five to eight rats, said Arias. And rats are prolific breeders, with each female producing up to 84 pups a year. The mind boggles when one starts extrapolating.

But the rat reservoir attackers are here to help, and they stressed there is a lot the average New Yorker can do. The team co-hosted a class known as the Rat Academy with city council member Corey Johnson in Chelsea on Aug. 17. The free, two-hour class helps arm building owners and tenants with rat-repelling information.

Containing trash is the key and it’s something both tenants and building owners can control. Using trash receptacles large enough to fit all the garbage the property produces and keeping the lids closed is rat proofing 101.

“Sanitation is pest management,” she said. A rat only needs one ounce of food and one ounce of water a day to survive.

And don’t be shy about involving your neighbors, say the rat professionals. Sometimes that means contacting 311, the city’s complaint service, on your own building or your neighbor’s, Arias said. If a rat complaint is lodged through 311, online or by phone, Bragdon’s rat team will respond.

A member of the rat team will inspect the property for free and without threat of violation. But if active rat signs are found, the next visit will result in a violation if the problem has not been remediated.

If the location is deemed a rat reservoir, the team brings in the full arsenal, free of charge. That means plugging holes with steel mesh and concrete, ensuring trash is correctly handled, destroying any visible burrows, and cleaning up any signs of rats.

Poison is the last step. If all of the basics aren’t dealt with, poison won’t be a lasting remedy, said Bragdon—it’s also a risk to pets and small children. Poison should only be handled by a certified professional.

And forget about alternative rat remedies such as mint, lime, or mothballs, said Arias. “Every holistic thing does not work.”

Laura Goggin, who lives near Tompkins Square in East Village, said the park used to crawl with rats, even during the day. A hawk took up residence, perching each day to catch its daily feast by plucking a plump rat at will.

Goggin said dry ice (the solid form of carbon dioxide) was inserted into the park’s rat burrows in July, and since then she has seen nary a rat during the day. As the dry ice dissolves into gas, it suffocates rats.

“The dry ice has definitely made a difference,” she said via email, “along with other measures the Parks Department has taken, such as laying down mesh over rat burrows, improving landscaping to deter rats, and using solar-powered, rat-proof trash compactors.”

Boston, another city with serious rat issues, experimented with dry ice in April this year. City workers took coolers of dry ice to a city park in the early morning and scooped pellets of it into rat burrows before stomping the entrances shut.

Bragdon said sterilization was tested on rats in the subway system in 2013, but the results were inconclusive. It doesn’t work if the rats don’t take the bait, she lamented. Nothing currently on the market works.

5 Myths and Facts About Rats