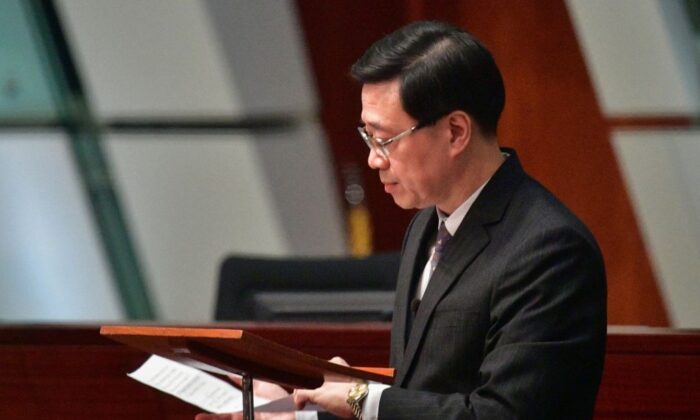 In Hong Kong, Many Say the Formal Withdrawal of Extradition Bill Came Too Late

In Hong Kong, a controversial extradition bill that has driven millions of locals to the streets in protest has formally been withdrawn. But for many, the city government’s decision came too late.

In the afternoon on Oct. 23, Hong Kong’s Security Secretary John Lee announced the formal withdrawal of the extradition bill during a session at the legislative council (LegCo).

According to Hong Kong media RTHK, Hong Kong leader Carrie Lam was not present at the session while the bill was withdrawn, but many of her ministers were present.

The legislative session did not last long, as several pro-democracy lawmakers shouted slogans at Lee, calling for his resignation. The lawmakers also shouted at Secretary of Justice Teresa Cheng to step down.

The Hong Kong government first proposed amendments to its extradition laws in February, which would allow the city’s top official, the chief executive, to sign off on extradition requests, including from mainland China, without approval from the LegCo.

Amid fear that the city’s judicial autonomy would be eroded if the bill was passed, millions of Hongkongers took to the streets in June. Lam eventually announced the bill’s withdrawal in early September.

Protesters are now calling on the city government to answer to their other demands, including greater democracy such as universal suffrage, and the establishment of an independent inquiry to investigate instances of police violence in the past 20 weeks.

Tam added that Hong Kong would be different today if Lam had responded to public opinion and withdrawn the bill in June.

Lo Kin-hei, vice chairman of the Democratic Party, wrote on his Twitter account that the extradition bill had “zero significance” now, and the protests will continue.

Agnes Chow, an activist and a member of pro-democracy party Demosisto, wrote on Twitter that the withdrawal was too late because she couldn’t count how many people have been injured, beaten, or arrested over the past four months.

Hong Kong police have arrested more than 2,000 people since the protests began in June, and hundreds have been injured.

Civil Human Rights Front, the main organizer behind many massive marches in the past months, wrote on its Facebook page that the bill could be withdrawn, but the damage to Hong Kong is irreversible.

The bill’s withdrawal came amid speculation that Lam might be replaced. The Financial Times, in an exclusive report, wrote that China was thinking about naming a successor to replace Lam by March next year, citing unnamed people briefed on the deliberations. Two candidates to replace Lam were named in the report.

However, Reuters reported that the Financial Times report was wrong, citing an unnamed senior official in Beijing.

The Office of the Chief Executive, in response to an inquiry about the Financial Times report by Hong Kong news site HK01, stated that it would not comment on speculation.