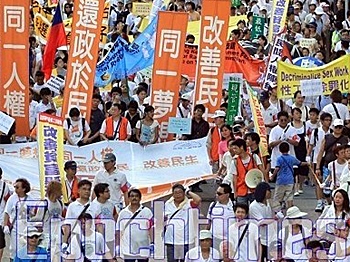 FREEDOM: About 47,000 people participated in a march for democracy and freedom in Hong Kong July 1, 2008. (Wu Lianyu/The Epoch Times)
China

In Hong Kong and Macau, Pressure from China to Tighten Freedoms

Macau, a special administration region situated off Guangdong Province, was handed back to Chinese rule in 1999, along with Hong Kong.

“Macau is unable to withstand pressure from the communist regime … [they have] totally succumbed to the pressure,” Szeto said on Hong Kong's online program "OurTV." The program was established to avoid media self-censorship in Hong Kong under pressure from Beijing.

Szeto said Macau is facing problems with corruption and collusion between businessmen and government officials, as well as a general lack of democratic elements within the system. There are no public bids on 90 percent of land auctions and very few members of the legislative council are publicly elected, he said.

Hu Jintao’s speech in Macau was “alarming,” said Szeto. Hu was advocating restrictions on freedom of speech in Hong Kong by urging the region to follow Macau’s lead in passing Article 23. The controversial law was shelved in Hong Kong after a street protest attracted 500,000 people in 2003 and forced its retraction.

Article 23 was passed in Macau earlier this year.

Article 23 says the Hong Kong Special Administrative Region has to enact laws to prohibit any so-called act of treason, secession, sedition, subversion, or theft of so-called state secrets, among others, against the Chinese Communist Party.

Hu said he wants the administrative, legislative, and judiciary departments in Hong Kong to cooperate, and that political arguments should be limited.

Szeto appealed to the people of Hong Kong to be vigilant and not to allow the territory to become like Macau.

“The power of Hong Kong residents is increasing, and we have at least stopped Hong Kong's democracy from going backward,” he said.

“Hong Kong residents have been voicing their opinions and stepping forward to speak out for the sake of freedom, human rights, and the rule of law. But democratic forces in Macau are quite weak, so naturally, Macau is unable to withstand pressure from the communist regime,” Szeto said.

Perseverance to Break Through Current Crisis

An electoral reform proposal, recently introduced in Hong Kong, is a step in the wrong direction, Szeto said. He said that many pan-democratic groups have expressed opposition, and he urged the people of Hong Kong to turn out for a protest on Jan. 1, 2010.

“The citizens of Hong Kong have stood up in the past to fight for true direct elections,” Szeto said. “In the face of the current challenge, it is all the more important that they step forward now to break through this crisis. It is not enough to do something once or twice. One must persevere all the way to the end.”

Szeto has been influential in pro-democratic political circles in Hong Kong since the mid-1970s. He served in the Legislative Council for 19 years, during which time he was the chief whip of the Democratic Party caucus. He is currently the chairman of the Hong Kong Alliance in Support of Patriotic Democratic Movements in China.