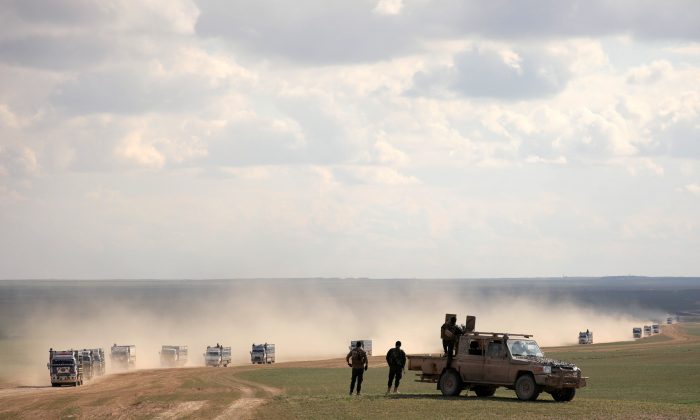 NEAR BAGHOUZ, Syria—Dozens of relatives of foreign fighters including Iraqis, Turks, and Russians fled Islamic State’s last bastion in eastern Syria on Feb. 12 as the jihadists lost ground to U.S.-backed forces.

A field commander with the Kurdish-led forces, which are pushing further into the besieged pocket, said mostly foreign militants were making their last stand.

The Syrian Democratic Forces (SDF), which holds about a quarter of the country, has mounted an attack to seize the enclave with the help of U.S. air strikes. Many hundreds of civilians streamed out in the past two days alone.

The SDF made “slow and methodical” progress in the battle near the Iraqi border, according to the U.S.-led coalition backing it.

Around 300 civilians who fled on Feb. 12 were transferred in trucks to a camp in the northeast. They appeared exhausted or hungry, and some of the children were barefoot.

Several people identified themselves as Iraqi, Turkish, Ukranian or Russian.

A fleet of 15 vehicles carrying U.S. forces headed along a dirt road towards the frontlines.

At the edge of Baghouz, civilians who had escaped stood in line for questioning by U.S. and SDF forces who were apparently trying to find wanted militants.

The SDF believes 400 to 600 militants remain holed up in the enclave, including many hardened foreigners and some emirs. Its spokesman said last month that most of the civilians still there were the wives and children of the militants.

“We are seeing fierce resistance from the Daesh fighters,” SDF field commander Adnan Afrin told Reuters on the outskirts of Baghouz.

“Most are foreigners, Iraqis, Europeans. There are a lot of Turks. We can hear them on the walky-talkies.” He said the jihadists now held only one square km (0.4 square miles) of the village.