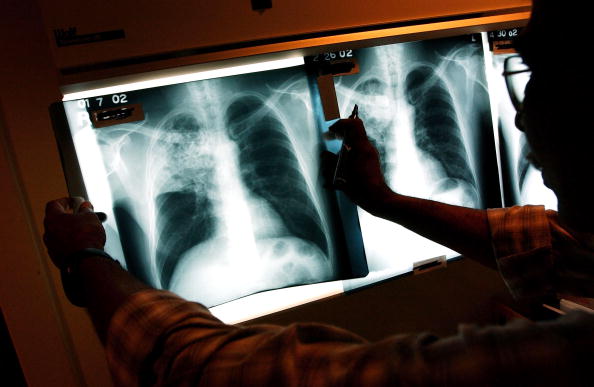 A doctor examines the x-rays of a tuberculosis (TB) patient at a TB clinic in Brooklyn, New York, on Nov. 27, 2002. (Spencer Platt/Getty Images)
Social Issues

In China, Anxiety About High-Stakes Exam Fuels Spread of Tuberculosis at School

The cover-up of a tuberculosis outbreak at a middle school in China has resulted in a full-blown health crisis. At the center of the cover-up are the high stakes involved when teachers, school authorities, and local officials bank on the students’ performances on the upcoming “gaokao” college entrance exam, equivalent to the SATs in America.

Tuberculosis (TB) is a serious, highly contagious disease that can be easily transmitted from person to person by breathing in the same air as the infected patient. Treating it requires early detection and immediate isolation.

At Taojiang No. 4 Middle School, located in Yiyang, a city in Hunan Province located in southern China, authorities had other ideas. The Chinese regime’s state mouthpiece Xinhua reported that, as of Nov. 17, there were 29 confirmed cases and 5 suspected cases of tuberculosis, with 38 students at the school taking preventive medicine as a precaution. The latest figures came after China’s National Health and Family Planning Commission announced on Nov. 17 that it would send staff to the school to treat the patients.

Since then, parents have noticed more students becoming infected. They began voicing complaints of negligence by school authorities and the local disease control bureau on Chinese social media in October.

On the popular Internet discussion forum Tianya, a distressed father, whose daughter tested positive for TB, first demanded to know why health authorities had not placed sick students in quarantine after he learned from other parents that some students had been taking TB medication for a year. In other words, students and parents knew of TB cases at the school before the first publicly reported cases in July.

The outbreak was finally widely covered by Chinese media on Nov. 15.

As speculation grew that the school authorities had attempted to hide the outbreak by not reporting the student cases to the local disease control bureau, the school principal, Yang Yu, denied the claim in an interview by state-run newspaper Beijing Youth Daily on Nov. 18. Though the bureau confirmed 29 cases, data collected by students and parents showed that many more people have been infected. When questioned about the disparity, Yang said that perhaps the local disease control bureau had initially failed to include cases of students with TB who had tested positive at other treatment centers.

An article published on iqulu.com, a news website run by state-run Shandong Television, provided an explanation as to why teachers, school authorities, and disease control officials would want to cover up the outbreak: if health officials were to make the announcement, the bad news would reflect poorly on local party officials’ political performance.

News of an outbreak could also result in panic among parents and students, which could then affect how well these students do in the upcoming gaokao. Poor student performance on the exam would damage the school’s reputation, and in turn negatively affect the teachers, as teacher performance is also judged by their students’ gaokao scores.

Ding Ling (a pseudonym), a student at Taojiang No. 4 Middle School, told The Epoch Times that the number of infected students is actually much higher—currently standing at 75. The local authorities have been harassing parents and students who dare to speak up, she added.

How The Outbreak Started

Ding explained that she began attending the No.4 Middle School—a secondary school that includes high school students like Ding—in September 2015. She was lucky to be placed in one of the three elite classes, where students are likely to be taught by better teachers, use better teaching materials, and have a higher chance of getting selected into top colleges in China.

She explained that the current TB outbreak likely started in her class—class 364, an elite humanities class for third-year high school students. She recalled how one of her classmates had a constant cough and the classmate’s father took her to the hospital last year. Ding said she and her classmates never found out what her ailment was—but suspected it was TB.

In January, Ding said she and her classmates realized that a classmate of theirs was taking a pill to treat TB, and since then the student has been going to the hospital for monthly checkups. That student is still attending class and was not quarantined.

During the Lunar New Year holiday, Ding said one of her closest friends, and fellow classmate, became sick. After spending ten days at the hospital, it was confirmed that she had contracted TB.

“It was from her that I came to realize that [TB] is infectious. But I didn’t know that it could be very infectious and I didn’t think anything would happen,” said Ding.

On Aug. 10, the school authorities had all students take a blood test, according to state-run newspaper Beijing Youth Daily. The test revealed that seven students had TB. Those seven students were asked to go home, while other students continued to go to school.

After learning that seven students had come down with the disease, many parents demanded that classes be canceled to prevent the disease from spreading, according to Chinese media reports. However, the school principal responded to the request by saying “If there is no death, there will not be any off days.” Eventually, on Aug. 19, the school canceled all classes for nine days.

Ding said that the number of confirmed cases increased to 44 after parents took their children to be checked at the local disease control bureau between Aug. 19 and 21. She added that as of Nov. 16, of the 75 students infected with TB, 50 of them were in her class, while the rest were mostly students who were once in her elite class but had since been transferred to regular classes—for academic reasons, not because of the disease.

The Epoch Times made a call to the Taojiang local disease control bureau and was told by a female staff member that the bureau did not have the authority to answer questions, and suggested that questions be directed to the county’s propaganda department.

Chinese state-run news website The Paper reported at least 50 cases of TB at the school after its own investigation.

According to Ding, four students were in critical condition in the hospital, while one of them required surgery after the TB virus had spread to every part of the student’s body.

Ding said that the TB medications had serious side effects, explaining that she saw some students looking very weak, while some had rashes all over their bodies.

As for Ding herself, she said she suffered from a menstrual disorder. The menstrual pain was so intense that she passed out. An ambulance had to take her to the hospital.

One male student was suspected of having early-stage lung cancer after having a second check-up on Nov. 15, according to Ding.

The Epoch Times has learned that many parents have tried to petition their misgivings to national, municipal, and provincial officials while trying to treat their sick children over the past two months.

An incident of suppression took place on Nov. 15, said a female student surnamed Liu, in an interview with The Epoch Times. She said about 30 to 40 parents, while on their way to the provincial government to voice their grievances, were stopped by school teachers, who had followed them. One of the parents was arrested by the police and then held for about 20 hours before being released.

On Nov. 19, Hong Kong newspaper Oriental Daily found that, through parents’ posts on Chinese social media, school authorities and Hunan’s provincial government authorities had prevented parents from bringing their sick children to a hospital in Beijing. Additionally, parents and their children who had traveled to Changsha, the capital of Hunan Province, were followed and monitored by plainclothes police.

“We don’t have any unreasonable demands. We only hope that that the school authorities would come out, not avoid the problem, not cover up the truth, but bravely face their mistakes,” said Liu.

According to Liu, the school authorities have agreed to foot any medical bills and offer compensation of a laptop computer to every sick student so he or she can continue taking classes through online lectures.