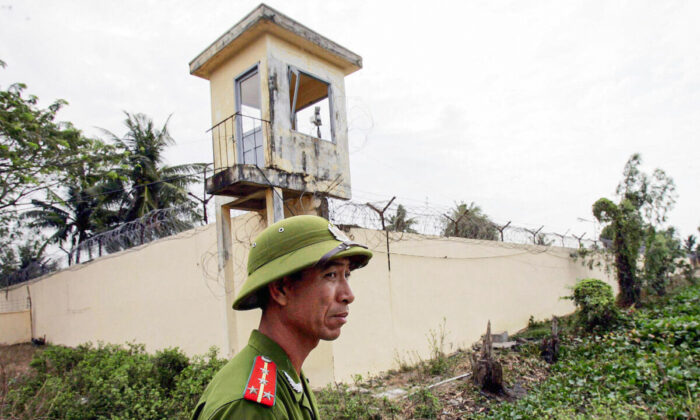 A 2006 file image of a Vietnamese policeman stands watch outside the Phuoc Co jail on the outskirts of the southern coastal town of Vung Tau. (Hoang Dinh Nam/AFP via Getty Images)
Asia & Pacific

Vietnamese human rights defender Nguyen Thuy Hanh, who was arrested for spreading information opposing the state, was taken to a psychiatric hospital without her family’s knowledge, her husband claimed in a Facebook post on Monday.

Hanh was arrested on Apr. 7, 2021, for “making, storing, or spreading information, materials or items for the purpose of opposing the State of the Socialist Republic of Vietnam,” without any access to a lawyer and her family.

The activist was known for her creation of the 50k Fund in 2017, which raises money for the families of unjustly detained persons across the communist-ruled country.

Her husband, Huynh Ngoc Chenh, claimed that Hanh’s health status appeared to be kept secret by authorities as her family has yet to receive any information regarding her health condition.

At least four patients at Hanoi’s Central Mental Hospital No. 1 contacted Chenh to inform that Hanh had been admitted to the psychiatric hospital, and a contact at the hospital has also confirmed the information, according to Chenh’s Facebook post.

Hanh was diagnosed with “severe depression” prior to her arrest and was treated at France-Vietnam International Hospital in Saigon, but her condition has since improved, Chenh told Radio Free Asia.

“Thanks to this specialist, her health had improved a lot. However, I haven’t had any information about her health since she was arrested in April 2021,” he said, claiming that Hanh was sent for a one-month-long of mental health evaluation after her arrest.

Chenh also claimed that authorities prevented Hanh’s defense lawyers from meeting with her.

Activist Nguyen Thuy Hanh was taken away this morning by a group of unidentified men, probably security police, says her husband. Unclear what she’s been accused of. #Vietnam #civilsociety pic.twitter.com/KkmimOPywM

According to Amnesty International, Hanh previously ran as an independent candidate for Hanoi in the 2016 National Assembly election. Her bank account, which contains monies to support the family of a village leader killed by security forces in Dong Tam village, has also been frozen.

“It is a travesty that Nguyen Thuy Hanh is being targeted for her humanitarian work in support of unjustly detained prisoners. She should be celebrated and supported for this work–not punished,” Amnesty International said in a statement.

The Lawyers’ Right Watch Canada (LRWC) also wrote to the government of Vietnam in July 2021 to call for the immediate release of Hanh and urged the Vietnamese authorities to end their harassment of human rights defenders, journalists, and political activists.

LRWC said that it received several reports indicating that Hanh was “repeatedly targeted by Vietnamese authorities for harassment, arbitrary detention, and assault.”

“LRWC has expressed grave concern with Vietnam’s persecution of its citizens, largely for exercising their rights to freedom of speech and association in violation of Vietnam’s international legal obligations under the International Convention on Civil and Political Rights, to which Vietnam acceded in 1982,” it stated.