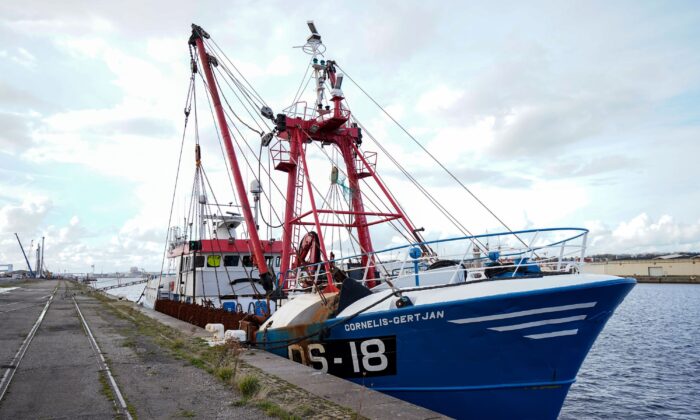 The Cornelis Gert Jan in Le Havre, where it was detained on Oct. 27,2021. (Andrew Matthews/PA)
UK

A British trawler which was impounded by France amid the dispute over post-Brexit fishing rights has arrived in the UK after being released by French authorities.

The Scottish-registered scallop dredger Cornelis Gert Jan left Le Havre on Wednesday evening after being held there since last week, when France accused it of fishing in its waters without a proper licence.

The blue, white and red trawler departed the quayside after dusk and docked at Shoreham-by-Sea, near Brighton, at 4.46am on Thursday, according to MarineTraffic.com.

The public affairs director of the vessel’s owner Macduff Shellfish confirmed it has been released by French authorities.

The ruling came after the boat’s captain, Jondy Ward, appeared at the Court of Appeal in Rouen earlier on Wednesday.

Ward explained that French maritime police detained the trawler last week for not being on a European register when it was fishing off the Normandy coast.

The skipper said he did not know if it was an error on the part of UK or French officials.

He said the boat was “definitely” caught in the middle of the Franco-British spat over post-Brexit fishing arrangements.

The comments were echoed by his lawyer, Mathieu Croix, who told reporters outside the courtroom: “We’re clearly caught in a political game as there is a whole story spun around this entire case, whereas in fact it is a rather mundane affair over fishing in an area that is supposedly out of bounds, and about licences that may or may not have been given and catch amounts that are relatively modest.”

It comes as Lord Frost prepares to meet France’s Europe minister Clement Beaune in Paris in an attempt to end the crisis in cross-Channel relations.

France has threatened sanctions over what it perceives as a refusal to issue licences to its trawlers to operate in UK waters.

The UK Government insisted the overwhelming majority of applications for licences have been granted.

French president Emmanuel Macron has delayed the imposition of punitive measures while talks between the UK, France and the European Commission take place.

But the French government has insisted the measures—which could include a ban on British trawlers landing their catches in French ports and tighter customs checks to hamper cross-Channel trade—remain “on the table” if a deal cannot be reached.

Lord Frost will follow his talks with  Beaune on Thursday by heading to Brussels on Friday to meet European Commission vice-president Maros Sefcovic.

Government spokesman Gabriel Attal underlined that the threat of sanctions remained: “We will see what comes with those meetings.

“As you know, the control measures that we announced are still suspended but all options are on the table and we may need to implement those measures if we do not reach an agreement.”

On Wednesday, he said: “We are just waiting for one thing: for the UK to respect the deal that they signed.”

Under the Brexit deal, European Union boats which can show they have fished in British waters in at least four of the years from 2012 to 2016 are eligible for a licence.

Some 1,831 applications for licences have been received, with 1,793 issued.

The main source of contention has been for smaller vessels, the under 12-metre category fishing between six and 12 nautical miles of the coast, where 50 applications have been received—all from French vessels—but just 19 have been issued.

The fishing row is just one of the issues Lord Frost will be raising during his talks in Paris and Brussels.

The main dispute between the UK and European Union is over Northern Ireland’s post-Brexit trading arrangements.

Talks are continuing between the UK and EU over the Northern Ireland Protocol, the part of the Brexit divorce deal which avoided a hard border with Ireland.

The deal effectively keeps Northern Ireland inside the EU’s single market for goods, resulting in some checks for products crossing the Irish Sea from Great Britain, which left the single market.

Lord Frost has claimed the conditions for using Article 16 – allowing parts of the deal to be suspended – have been met because of the difficulties being caused.

The UK wants an end to the European Court of Justice’s oversight role, something that Brussels has said is impossible.

“I know he knows full well that whenever the internal market is involved, the ultimate arbitrator is the European Court of Justice.”

But he said the European Commission had been “bending over backwards” to reach an agreement with the UK on the protocol.