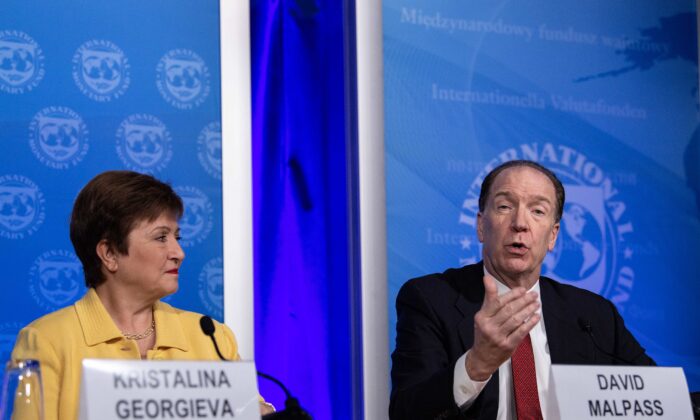 In a dialogue kicking off the first in-person meetings of the World Bank and International Monetary Fund (IMF) since the pandemic, the chiefs of the two institutions warned of a series of compounding crises threatening livelihoods, including persistent inflation and a growing risk of a global recession.

In a “curtain raiser” on Oct. 10 leading into a weeklong set of annual meetings between the two institutions in Washington, World Bank President David Malpass and IMF Managing Director Kristalina Georgieva discussed the crises and called for coordinated action in the face of what they described as an “era of volatility.”

“There’s a risk and real danger of a world recession next year,” Malpass said, kicking off the discussion. He cited slowing economic growth in advanced economies and currency depreciation in many developing countries.

Debt levels are becoming increasingly burdensome in developing countries as their currencies depreciate, Malpass said, adding that “inflation is still a major problem for everyone, but especially for the poor.”

Poverty levels have soared across the globe, Malpass said, noting a “very concerning” 4 percent reduction in the median income.

The World Bank’s latest poverty report estimates that about 70 million people were pushed into extreme poverty in 2020, the biggest one-year increase since the agency started tracking prosperity levels in 1990.

Malpass spoke of a “reversal” in development as capital has increasingly been flowing out of developing economies to more developed ones. Compounding this are problems associated with food, energy, and fertilizer shortages.

“It’s a vast array of problems,” he said, adding that one of his core desires is to see more resources flow to developing economies.

Georgieva sided with the view that the risk of recession has risen. She estimated that, by the end of next year, around one-third of the world economy will have seen at least two consecutive quarters of negative growth, the common rule-of-thumb definition for a recession.

“The total amount that would be wiped out by the slowdown of the world economy is going to be—between now and 2026—$4 trillion,” she said. “This is the size of Germany’s GDP—gone.”

Driving this economic wipeout are “the forces of disruption,” she said, listing issues such as the impact of COVID-19 on supply chains and the impact of the war in Ukraine on food and energy prices.

“Inflation is stubbornly high,” she continued, a circumstance that has led to a more aggressive tightening of financial conditions than previously expected.

Georgieva noted that economic activity is slowing down in all three major economies—Europe, which has been hit hard by high natural gas prices; China, where housing volatility and COVID-19 lockdowns are dragging down growth; and the United States, where interest rate hikes “are starting to bite.”

The IMF chief advocated for actions that would tame inflation, which she called a “dramatic tax,” especially on the poor.

While she said it’s unacceptable for inflation to become a “runaway train,” she cautioned about the risk of over-tightening by central banks, which could lead to recession fears materializing on a large scale.

She said it’s reasonable for governments to adopt some fiscal measures to help people weather the current and imminent crises but called for any support to be well-targeted “because if it is not, then we are adding fuel to the flames of inflation.”

Georgieva also called for countries to “get the big, scary danger of debt crisis under control” because it would affect all nations, not just those with high debt burdens.

“Not a rosy picture,” she said. “But if we joined forces, if we act together, we can reduce the pain that is ahead of us in 2023.”