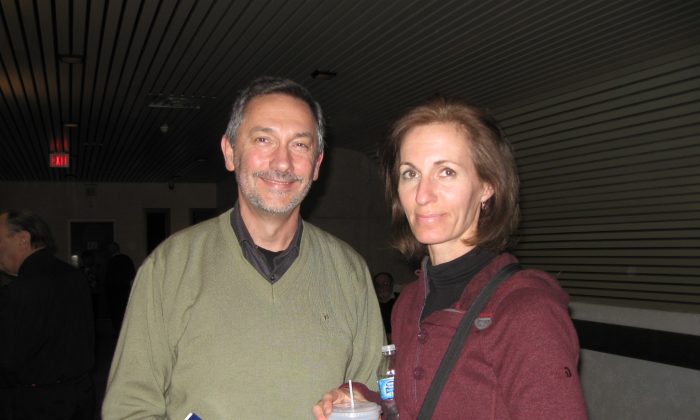 Nicholas Komarnycky, director of engineering for 3-D theatre IMAX corporation, and his wife Christine attended the Jan. 14, 2014, Shen Yun performance at Centre In The Square, Kitchener.

KITCHENER-WATERLOO, Canada—Centre In The Square, Kitchener’s largest theatre, hosted Shen Yun Performing Arts on Tuesday, to the delight of theatregoers.

Nicholas Komarnycky, director of engineering for 3-D theatre IMAX corporation, and his wife Christine were in attendance for the Jan. 14 performance.

“The dances are wonderful, the choreography is very, very good, and the costumes are absolutely stunning,” said Mr. Komarnycky, who is also the founder and president of VRTec, a green technology consultancy company. He also sits on the board of directors at the NSERC Photovoltaic Innovation Network.

“It’s lovely,” she said. “The costumes I’m very much enjoying because I know how much work goes into that. The dancing is lovely too.”

Mr. Komarnycky was impressed with the lighting and production design, saying it set off the dancers’ silk costumes perfectly.

“The way the lighting is reflecting off the whites and the yellows—it’s very brilliant,” he said. “The way they keep moving is actually changing the light, the way it keeps bouncing off, so it looks very, very good.”

He also noted Shen Yun’s unique animated backdrops. Designed to provide vivid context to each story-dance, the moving backdrops are timed perfectly with the dancers to create the illusion that they can jump in and out of the screen.

“The connection is definitely there—the way they choreographed the jumping down, and as the images move off, that’s very good,” he said.

Mr. Komarnycky said the performers were very talented and did an excellent job of expressing the traditional culture.

“The artists are excellent,” he said. “It takes a lot to learn what they learned.”