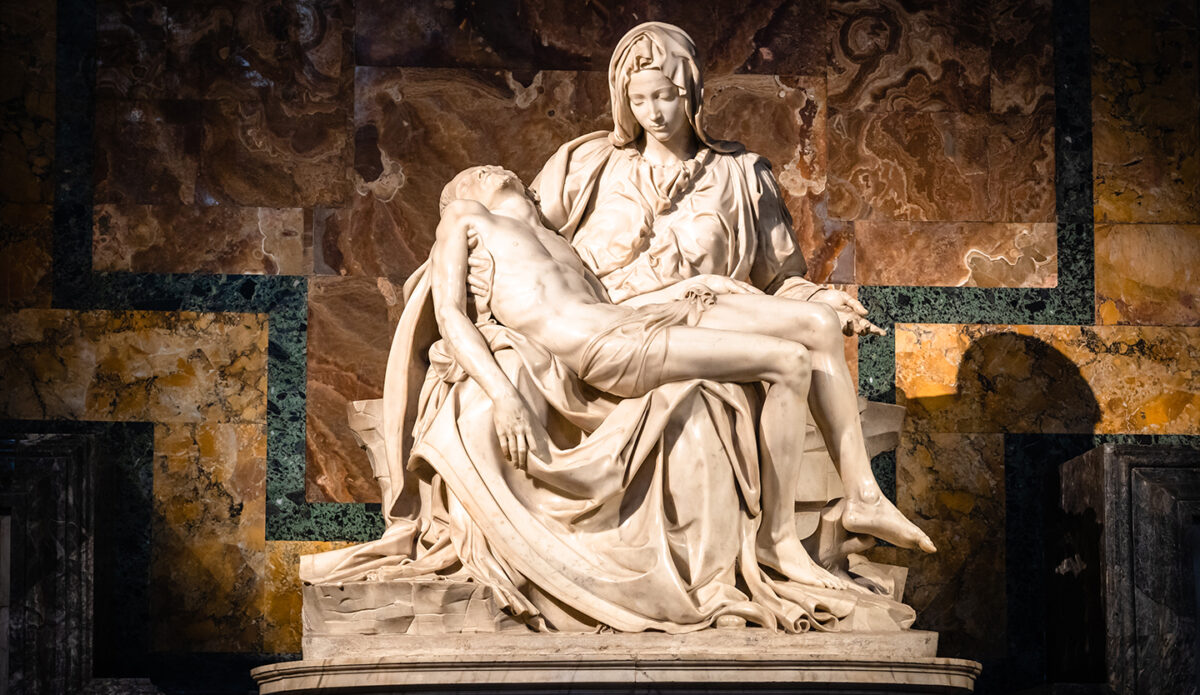 Michelangelo’s “Pieta.” Mary holds Jesus with an expression not of sorrow, but of hope. (PhotoFires/Shutterstock)
Arts & Tradition

Image of Hope: The ‘Pietà’

The most tragic sight imaginable is a mother who has lost a child. Witnessing such a thing, most shrink from the searing sense of loss, the emptiness of bereavement. Yet when Michelangelo unveiled his “Pietà”—the image of the Virgin Mary mourning the lifeless Christ—he revealed how sorrow can be conquered by hope.

In 1497, Cardinal Bilhères de Lagraulas commissioned a then unknown 23-year-old Michelangelo Buonarroti to produce the over-life-size sculpture group, the young Florentine’s first public work. It was destined for the cardinal’s burial chapel in St. Peter’s Basilica in Rome, then a much smaller building than the massive modern church. It would be placed above an altar, where future generations might pray for the cardinal’s soul.

Michelangelo spent a year sourcing and transporting the single block of marble from Carrara and unveiled the completed work to universal astonishment during the Jubilee Year of 1500. The Year of Jubilee was celebrated every 50 years, following the seven cycles of sabbatical years, and was celebrated as a year of liberation and rest.

Modern viewers have to peer at the sculpture from behind a wall of glass, where it was housed after it was attacked with a hammer in 1972. The welts and breaks were repaired, but the protective shield dulls the artistic voice of this powerful statue.

The Theme in a New Medium

Young Michelangelo was the first Italian to sculpt the subject of the Pietà, a theme developed by German artists in the 14th century and later adopted by the French, who gave it its name meaning “to feel sorry for.”

The composition, showing Mary holding the dead Christ before burial, had no scriptural basis, and northern artists sought to evoke pity by emphasizing Jesus’s wounds and Mary’s grief. With jagged, gaping holes in Christ’s hands, feet, and side, a body stiff with rigor mortis, and the crown of thorns still bound around his brow, the earlier versions were meant to make the viewer recoil.

But the Florentine sculptor had other ideas. He rendered Jesus’s body with the perfect articulation and proportions of a Greek god, elegant limbs draped across Mary’s lap. He made the wounds barely visible and the sleeping face peaceful. The only indications of death were in the carefully wrought details of the body: a shoulder bunched up under the ear, sagging muscles in the flesh of the thigh, and blood pooled in the dangling hand, all to suggest the heaviness of death.

Michelangelo employed the pathos of the scene to redirect attention from Christ, whose suffering is long over, to the face of Mary, whose sorrow must be at its most acute. Gazing into the youthful visage, however, we see no frown of resentment, no open-mouthed shouts of grief, and no raised brows of doubt. Her still, solemn face evokes the youthful Mary who, in the Gospel of Luke, as an adolescent girl told the angel Gabriel that she would do his bidding.

Michelangelo’s Mary is the woman who, when she said “yes” to God, meant it. Through the trials of explaining her mysterious pregnancy to Joseph her betrothed, to delivering the Son of God in a rough stable, to the rapid flight to Egypt one step ahead of Herod’s soldiers, Mary’s “yes” had life-altering consequences.

On this Friday, when after she had poured 33 years of affection into her son as well as 33 years of expectation in the savior, it would seem too much to take all that investment of love and hope and bury it in a tomb.

Michelangelo’s deft chisel work accentuates the perils of this bleak moment. The veil around Mary’s face appears to hang loosely, leaving a ribbon of shadow around her brow, pooling into darkness on the sides of her neck. Deep crevasses in her bodice and skirt swallow up the light, forming pockets of obscurity.

Originally the statue was placed in a shallow niche, where grim shadows would have pressed in on all sides. Undaunted by the darkness, Mary perseveres with her eyes fixed on the body of Christ, carved by Michelangelo in the smoothest planes possible with surfaces that could take an extraordinarily high polish. Art historians marvel that the sculptor never polished marble that highly again, but stepping back from the work one can see why.

For all the shadows that play around the Blessed Virgin, her eyes are transfixed by the light radiating from the body of her son. Mary never loses sight of the light, even in the darkest hours—a timeless lesson for the millions who have stood before the work recalling their own pains and sorrows while seeing Mary shoulder the heaviest burden any human could be asked to bear. She never loses hope. The pyramidal structure of the statue enhances the sense of her constancy. Her hope anchors her in the stormiest of moments.

In the midst of all this artistic perfection, there is an anomaly that insinuates itself into the scene: Mary’s lower body is disproportionately large in comparison to her upper body. The broad swath of drapery transforms her lap into a showcase for the body of Christ, resembling a shroud as well as recalling the womb that held him for nine months.

But Jesus, stretched across Mary’s legs, does not appear to be ensconced firmly in her lap; he slumps downward, as if about to fall onto the altar below. With one hand, Mary holds her son close. Her other hand opens toward the viewer in a gesture of offering. The light and the hope that had been the source of Mary’s strength is not kept for herself, but readily offered to anyone who comes seeking solace in dark times.