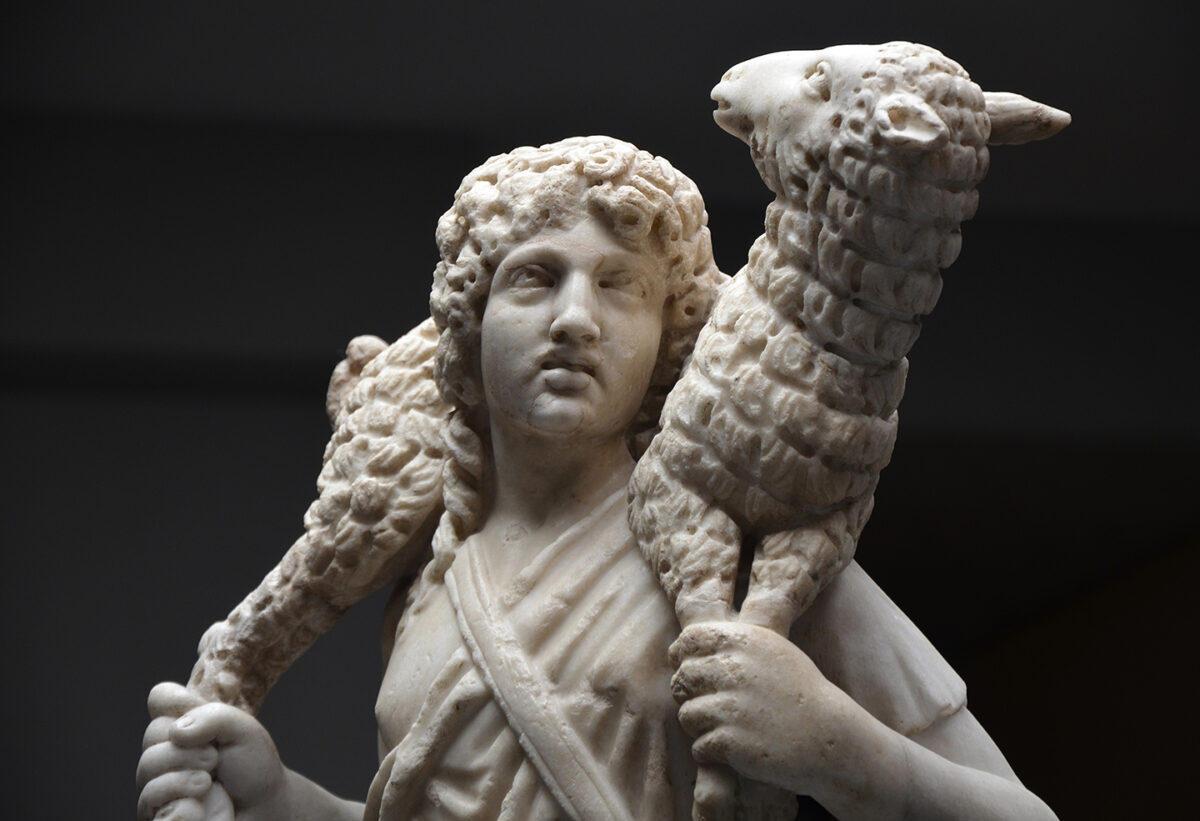 A detail of the marble statue, "The Good Shepherd," circa 300–350, by unknown artist, at the Catacombs of Domitilla, Vatican Museums. (Carole Raddato/CC BY-SA 2.0)
Arts & Tradition

Images of Hope: The Good Shepherd

By the third century A.D., the Roman Empire had devolved into an amalgamation of jaded peoples, living with constant war and under endless political instability. They numbed their existential anxiety with pleasures and luxuries and explored myriad religions to try to fill the spiritual void of their age. The Roman identity had lost meaning for its many citizens flung across its vast expanse, and unbeknownst to them, the fall of the empire was looming on the horizon.

The Christian community developed during those uncertain times, aggravated by sporadic and vicious persecutions, yet it proclaimed a message of hope and light in the darkness. To embody this hope in visual form, they crafted an innovative icon: that of the Good Shepherd, an image taken from the biblical teachings of Jesus.

Merging Scripture with motifs that were familiar to the very sophisticated viewers in the Roman Empire, the Good Shepherd was the first successful icon of Christianity, with copies found from Britain to Spain to Syria. The most famous version was produced in Rome, however, and it is kept today in the Vatican Museums.

In this work, the Christians transformed a Greco-Roman visual “alphabet,” as it were, into a new, joyful lexicon. The Good Shepherd, a figure wearing an exomis (a short one-sleeved tunic) and carrying a sheep over his shoulders, was very familiar to the Hellenized world of the Mediterranean.

The Greeks knew the figure as Hermes, the beloved messenger of the gods, protector of shepherds, and guide for souls to the afterlife, who was often depicted carrying a sheep. The Romans saw the sheep-toting man as representing the idea of philanthropy: the willingness to take another person’s burden, economic or civic, on one’s own shoulders.

The Christians built on this message of kindness, putting forth their shepherd who would take on the burden of sin to lead souls to heaven. To emphasize the divine power of their merciful shepherd, they employed the features of the god Apollo for his youthful face.

As the sun god, Apollo became a useful conduit for the Roman people to understand Christ as Light of the World. The image also became an entry point into Scripture as it alludes to passages describing both his incarnation as well as his crucifixion and resurrection.

The Sheep and the Goats

One of the earliest of the visual images, painted in 250–275 in the Catacombs of Priscilla in Rome, added a uniquely Christian twist to the iconography, where the shepherd carries not a sweet docile sheep over his shoulders, but a goat.

Satyrs, Greek personifications of rampant lust and intemperance, were represented as half human and half goat. Jesus spoke of judgment as separating the sheep from the goats. Odorous and obnoxious, these unloved creatures found a protector in the Good Shepherd, who came to find those whose weaknesses had led them astray. He offered hope to the lost as well as the faithful.

The Good, True, and Beautiful

The Good Shepherd was never intended as an image of recrimination or guilt, nor was it a denunciation of pagan beliefs and practices; it was meant as a harbinger of peace. It evoked pastoral poetry, beloved by the Romans, which lauded the rustic and simple life of the country.

Virgil, the Romans’ most celebrated poet, had captured the imagination of an empire with idyllic and mystical experiences recounted by shepherds amid their flocks in his widely read “Eclogues.” The genre flourished and spread to the visual arts, as seen in the pastoral friezes from the first-century house of Livia, wife of Emperor Augustus, in Rome.

The Good Shepherd disappeared as the Byzantine Empire gained influence over the old Roman territories, but its memory still endures in Catholic tradition today. Every year, on June 29, the Feast of Sts. Peter and Paul in Rome, new archbishops are bestowed with a stole of white wool, which is draped over their shoulders. This stole is symbolic of their task to assist the pope in carrying the souls of the flock toward salvation.

There was much ugliness in the late empire—with rampant war, disease, poverty, and cruelty—yet the Christians chose to rise above the ubiquitous grime and crime. They called their shepherd “kalos,” a Greek word meaning not only “good” but also “true” and “beautiful.” That call to beauty could be described as the mandate for the centuries of Christian art to follow. No matter how brutal their circumstances might be, the Good Shepherd invited his followers to put their best face forward and strive to offer hope and peace in a turbulent age, an age not much different from our own.