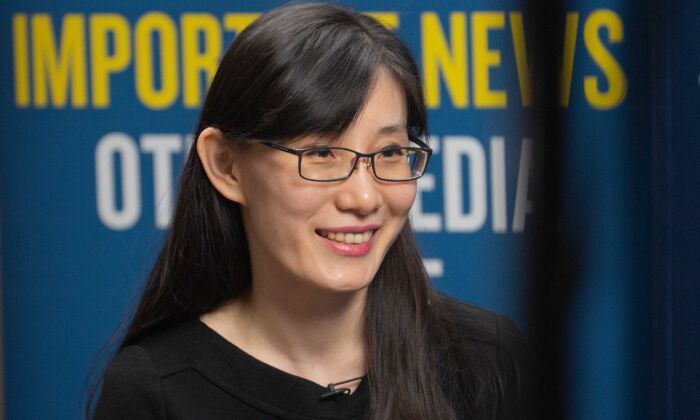 ‘I’m the Big Problem:’ COVID-19 Whistleblower on Why She Won’t Be Silent Despite Threats to Her Life

Her scientific conclusions about the COVID-19 pandemic and the origins of the CCP (Chinese Communist Party) virus are controversial. The jury is still out on her views that the CCP virus is the result of a secret 20-year-old bioweapons research program by the Chinese regime that includes coronaviruses.

But despite pushback from fellow scientists, her former employer, and even her now-estranged husband—who she said tried to poison her—COVID-19 whistleblower Dr. Yan Li-meng says it was “very easy” for her to risk her life and career to speak up about her observations of the initial outbreak.

“I’m the big problem,” the virologist told EpochTV’s “Crossroads” program. Yan was a member of the well-connected WHO influenza H5 Reference Lab based at the University of Hong Kong School of Public Health—a key emergency disease lab for the Chinese government. “They [the CCP] need to disappear me,” she said.

On why she’s considered such a threat to a communist regime that governs more than 1.4 billion people, Yan claimed, “The reason is very clear, because the things I’m telling the world actually reveal the top confidential plans of the Chinese government. They’ve spent over 20 years working on the novel bioweapons, including using coronavirus.”

The CCP has already silenced other whistleblowers who might have had valuable knowledge and insight into the coronavirus outbreak.

With the nature of Yan’s claims being difficult to verify, she knows she is putting her reputation on the line by sharing her views on the record so that the public can judge for themselves regarding what really happened in Wuhan.

Her bioweapon claims have received no support in publications by the international scientific community and have been dismissed by the U.S. intelligence community, which said in its August report, “We judge the virus was not developed as a biological weapon.”

Chinese officials had no “foreknowledge of the virus” before the initial outbreak of COVID-19 emerged, the report said, which remains inconclusive regarding the origins of the CCP virus, while pointing to either a natural origin or a laboratory accident as the most likely scenarios for the emergence of SARS-CoV-2.

However, the rigors of the report met with some challenges, including that a lab leak does not rule out that the CCP was doing bioweapon research that inadvertently led to a leak, as argued by David Asher, former lead COVID-19 investigator at the U.S. State Department.

There is no evidence to date suggesting that the virus was intentionally released, contrary to Yan’s claims.

There is intelligence supporting the existence of a CCP-led bioweapons program. In May, investigative reporter with The Australian, Sharri Markson, reported that the U.S. State Department had uncovered—during its investigations into the origins of COVID-19—a 263-page paper written by People’s Liberation Army scientists and senior Chinese public health officials from 2015.

The paper, titled The Unnatural Origin of SARS and New Species of Man-Made Viruses as Genetic Bioweapons, outlined opportunities with SARS coronaviruses for a “new era of genetic weapons” in which the viruses can be “artificially manipulated into an emerging human ­disease virus, then weaponized and unleashed in a way never seen before.”

The document, authored by 18 of the Chinese military’s and academia’s top people, also outlined a claim by Chinese military scientists that the SARS-CoV-1 virus, which caused many deaths in 2003, was developed by “terrorists” who released the man-made bioweapon on China.

Analysts have pointed to this as a potential motivation for Beijing to have an interest in developing its own bioweapons research.

Yan said that because she’d crossed the “red line” of the CCP and its political interests, agents and informants of the CCP have been monitoring her movements and communications even on American soil, and spreading rumors to undermine her reputation. Her husband even acted on the regime’s behalf in an attempt to take her back to Hong Kong where she can be charged under Beijing’s new so-called National Security Law after a failed attempt to poison her breakfast before she defected to the United States in April 2020.

As the pandemic unfolded in January 2020, Yan said she “realized it was urgent at that time” to speak up.

She claims to have learned that Wuhan already knew of human-to-human transmission of a SARS-like virus on Dec. 31, 2019. Then, as January rolled in, Yan said she watched the CCP and WHO lie to the world about what they already knew about the transmission of the virus—which would later be proven a lie as the first cracks began to emerge—showing that the CCP was covering up the extent of the disease outbreak.

Yan added that at this stage, the CCP had already silenced or disappeared the whistleblower doctors—like Dr. Li Wenliang—in mainland China who were trying to warn the world about the virus. By Jan. 17, no more updates were coming out of Wuhan.

Yan then thought, “If I don’t tell the world, they will keep covering [it] up and there will be [a] bigger outbreak and even a pandemic all over the world.”

On Jan. 19, 2020, she decided to go public. She told The Epoch Times’ “American Thoughts Leaders” that she first spoke to Mr. Lu De, who hosts a Chinese-language anti-CCP YouTube channel based in America. She had told Lu it was in the hopes of “giv[ing] pressure to [the] Chinese government to stop this evil plan.”

“It delayed the outbreak and reduced the damage in some way,” Yan told Crossroads of her efforts, as the CCP was “forced to admit the outbreak in Wuhan within four hours” of her comments.

“They were forced to admit for the first time to the world that human-to-human transmission exists within 24 hours of my revelation,” she added.

She said that she was inspired to speak up after witnessing the Hong Kong pro-democracy protests.

“I was in Hong Kong, and when I saw it happen in Hong Kong … I realized how evil the CCP can be. They want to grab the freedom, democracy, human rights—all these basic things—from poor people. And once people start to fight, they will just disappear them or kill them,” she lamented of her country.

She said that one of the protest scenes that really struck her was where many of Hong Kong’s seniors, who would have been over 70 or 80, stood on the front line to stop the army from harming the protesters. Most of the protesters were young people.

“So this is also what I think, this is the thing I want to do to stop it,” she said of her efforts. “And I’m lucky I’m still alive now to share the things with people. So it’s just very easy.”

Meanwhile, Yan has been invited by the debating society of the University of Oxford, the Oxford Union, to speak on the motion: “This House Would Do Whatever Necessary.”  The Oxford Union has previously hosted figures such as Sir Winston Churchill, Albert Einstein, and Mother Theresa.