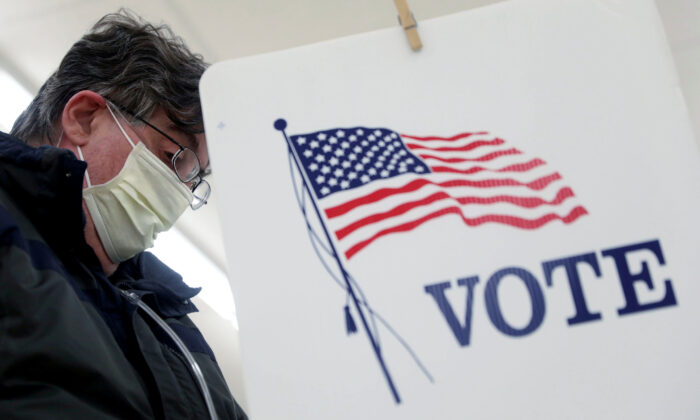 Illinois voters will head to the polls on June 28 for primary races to pick their party’s candidates for 17 U.S. House seats, one U.S. Senate seat, and the state’s governor.

Among the House seats, five are in Democratic-leaning districts that are considered winnable by Republicans in a midterm year when the president’s party typically loses ground, according to the nonpartisan, independent Cook Political Report.

Nationwide, Republicans need to flip a net of five House seats to gain the majority.

Among the five Illinois seats, the 13th Congressional District was remapped by the Democratic-controlled state legislature last year to annex more urban centers across hundreds of miles in central Illinois in a long, narrow, snake-like shape.

The new district is more Democratic-leaning, prompting the Republican incumbent, Rodney Davis, to seek office in a nearby Republican-friendly district instead.

Nikki Budzinski, a former union organizer and former chief of staff of the Office of Management and Budget in the Biden administration, has emerged as the front-runner in the Democratic primary.

Her campaign has raised $1.7 million, far outraising any other candidate in the race, according to the early June campaign finance data published by the Federal Election Commission (FEC).

In the Republican primary, Jesse Reising, founder of the Warrior-Scholar Project and a former federal prosecutor, and Regan Deering, a small-business owner and local philanthropist, raised the most money, at $457,751, and $373,730, respectively.

They are running on a similar Republican platform, that of pro-life, pro-Second Amendment, and border security, according to conversations with both. They told The Epoch Times that the everyday problems under Democratic leadership—inflation, gas prices, and crime rates—offer them a prime opportunity to win a race against Budzinski, a Democratic machine insider.

Another district, the 17th, was also redrawn in a long crescent shape from the northwestern corner down to central Illinois to annex more Democratic-leaning urban centers.

Cheri Bustos, the five-term Democratic incumbent, decided to not seek reelection. The open seat has attracted a slew of Democratic candidates and a well-funded Republican contender.

In the Democratic primary, Eric Sorensen leads in fundraising at $450,665, according to the FEC. A meteorologist at several local stations for over 20 years, Sorensen’s top campaign issue is climate change.

Jonathan Logemann, a teacher, former Rockford alderman, and veteran, has raised $375,563. His top campaign issues are job development and the economy, and he has scored a dozen union endorsements.

However, their fundraising was dwarfed by the $2.75 million raised by Esther King, the Republican primary front-runner. King, a real estate lawyer and former Army captain, ran for the same seat two years ago, losing to Bustos by 4 points.

In the competitive 6th District, which covers some of the most conservative Chicago suburbs, a new map has led to the state’s only primary fight between two Democratic incumbents, two-term Rep. Sean Casten and first-term Rep. Marie Newman.

Among the two, Casten positions himself as more moderate than Newman. For example, on health care, Newman supports a single-payer, universal health care system while Casten favors keeping the private sectors.

Casten has raised $3.2 million, almost twice that of Newman, according to the latest FEC data.

Grasso told The Epoch Times that his take on national issues is more moderate than that of Pekau. For example, Grasso is open to discussions on gun control measures, while Pekau thinks the focus should be on criminals, not guns.

Grasso said his moderate stance will attract support from independent and conservative Democratic voters, which is crucial to winning the seat in a competitive district.

In the 11th and 14th Districts, which are considered more Democratic-leaning than the previously mentioned districts, based on the Cook Political Report’s Partisan Voter Index, Democratic incumbent Bill Foster and Lauren Underwood have raised $2.1 million and $4.6 million, respectively, according to FEC’s latest data.

Both seats have attracted a crowded group of Republican contenders. Among them, young conservative Catalina Lauf is the most recognized candidate—she spoke at the Republican National Convention in 2020 and worked as an adviser at the U.S. Department of Commerce during the Trump administration.

Lauf has raised $1.4 million in the 11th District race, far outraising any other Republican candidate.

Incumbent Democratic U.S. Sen. Tammy Duckworth is unopposed in the primary. She raised $10.7 million, almost 30 times the amount raised by the most well-funded Republican challenger Kathy Salvi, according to the latest FEC data.

Duckworth, a Purple Heart-awarded veteran and former assistant secretary of the U.S. Department of Veterans Affairs, was elected in 2016 over GOP incumbent Mark Kirk.

A billionaire member of the Pritzker family that owns the Hyatt hotel chain, Pritzker contributed $90 million to his reelection campaign in January, according to a quarterly report published by the Illinois Board of Elections.

In the Republican primary, the two front-runners in the six-way race are Darren Bailey, a pro-Trump conservative state senator and staunch critic of Pritzker’s pandemic mandates, and Richard Irvin, mayor of Illinois’s second-largest city, Aurora.

In the June Chicago SunTimes/WBEZ poll, Bailey was favored by 32 percent of respondents, followed by Irvin at 17 percent, and political outsider Jesse Sullivan at 11 percent; 27 percent of likely voters are undecided.

Bailey received $9 million, the lion’s share of his campaign funds, from Republican billionaire Richard Uihlein, according to campaign filings published by the state.

Bailey also got a huge boost from the Uihlein-supported independent expenditure committee called “People Who Play By the Rules.” Such committees act independently from candidates.

Uihlein gave $8 million to the committee, whose expenditures all went to communications (mailers, TV ads, digital ads, and so on) opposing Irvin, according to committee filings.

Meanwhile, according to multiple media outlets, the Democratic Governors Associations has spent tens of millions of independent dollars in the Republican primary to prop up Bailey, the rationale being that Pritzker could sail to reelection by easily beating pro-Trump Bailey in the general election.

Irvin, the onetime front-runner, received $50 million from Illinois’s richest man, Ken Griffin, according to filings by the Irvin campaign.

Weeks after Irvin plummeted in polls, Griffin announced that he was moving his multinational hedge fund firm Citadel from Chicago to Miami.

Correction: A previous version of this article misstated that Sen. Tammy Duckworth was running for a congressional district and that Jesse Reising was a former Marine. The Epoch Times regrets the errors.