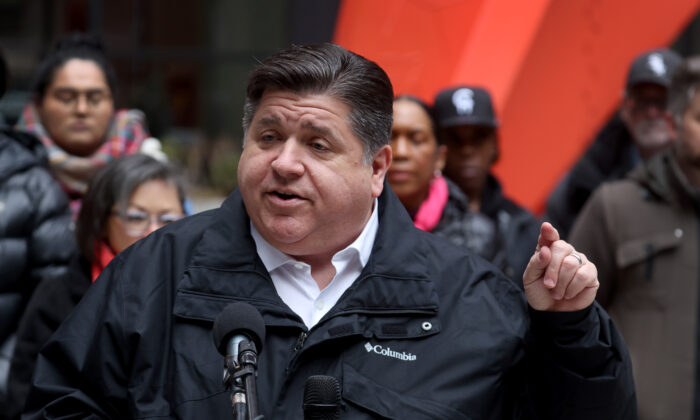 The governors of blue states California, and Illinois on Monday joined New York state in issuing proclamations declaring states of emergency in response to the 2022 monkeypox virus outbreak currently spreading primarily among the LGBT population.

California Gov. Gavin Newsom, also a Democrat, cited similar reasons when he declared a State of Emergency “to bolster the state’s vaccination efforts.”

Illinois Gov. J.B. Pritzker, a Democrat, declared the monkeypox virus a public health emergency and the state a “disaster area” in a bid to unlock resources to “aid in the distribution of vaccines.”

It comes a day after New York Gov. Kathy Hochul issued a statewide executive order to declare a disaster. She said that “more than one in four monkeypox cases” are in New York state. Among other issues, the order provides more leeway on which individuals can administer the monkeypox vaccine, including pharmacists, EMS workers, and midwives.

There are currently over 5,800 monkeypox cases in the United States, according to the U.S. Centers for Disease Control and Prevention (CDC).

In confirmed or presumptive case numbers, Illinois is ranked third most, with 520 cases; California is ranked second, with 827 cases; and New York is ranked first, with more than 1,300 cases. Florida and Georgia both have over 400 monkeypox cases as well.

“[Monkeypox virus] is a rare, but potentially serious disease that requires the full mobilization of all available public health resources to prevent the spread,” Pritzker said in a statement.

“That’s why I am declaring a state of emergency to ensure smooth coordination between state agencies and all levels of government, thereby increasing our ability to prevent and treat the disease quickly.

“We have seen this virus disproportionately impact the LGBTQ+ community in its initial spread. Here in Illinois we will ensure our LGBTQ+ community has the resources they need to stay safe while ensuring members are not stigmatized as they access critical health care,” he said.

On July 23, the World Health Organization declared the monkeypox outbreak a public health “emergency.” Since then, the U.S. Centers for Disease Control and Prevent (CDC) has been monitoring the outbreak across the United States and consulting with states.

Pritzker’s office said that declaring a “state of disaster” will expand the resources and coordination efforts of state agencies to respond, treat, and attempt to prevent the spread of monkeypox.

California is making use of infrastructure developed during the COVID-19 pandemic to deploy monkeypox vaccine clinics in an outreach effort targeting the LGBT community.

Newsom’s office said the governor’s proclamation will support a “whole-of-government” response to monkeypox, including getting more vaccines and outreach to the LGBT community on accessing vaccines and treatment.

“California is working urgently across all levels of government to slow the spread of monkeypox, leveraging our robust testing, contact tracing, and community partnerships strengthened during the pandemic to ensure that those most at risk are our focus for vaccines, treatment and outreach,” Newsom said in a statement.

“We’ll continue to work with the federal government to secure more vaccines, raise awareness about reducing risk, and stand with the LGBTQ community fighting stigmatization.”

The LGBT community and public health experts have expressed concerns around stigmatization, wanting to avoid issues that occurred around the HIV/AIDs virus in the 1980s.

The monkeypox virus is primarily being spread through the sexual activity of gay and bisexual men, a major peer-reviewed study found. But the virus is expected to eventually spread beyond the LGBT community, a World Health Organization official has said.

Monkeypox cases have been reported in a female health care worker and in an infant and a toddler who separately have LGBT parents.

The LGBT community has been resistant to monkeypox being characterized as a sexually transmitted disease. The virus can be transmitted through close but non-intimate contact and through infected bedding and clothing.

However, the current outbreak has primarily been transmitted during sexual activity and is theorized by experts to have emerged at two large-scale LGTB events held in Europe—a rave in Spain and a festival in Belgium oriented around a sex-based subculture.

The Biden administration has delivered more than 7,000 doses of vaccine to Illinois, with 13,000 additional doses expected in the near future, according to Pritzker’s office.

“A comprehensive and swift response is key when containing a disease outbreak,” said IDPH Director Sameer Vohra. “These measures will allow the state to deploy all our resources in fighting this disease and will open efficient lines of communication and cooperation across state lines, an essential step in tracking monkeypox and improving tools and processes to prevent and address it.”

There has been a limited supply of the FDA-approved Jynneos monkeypox vaccine in the United States, but the CDC said more supply is expected in the coming weeks. Jynneos is also known as Imvanex or Imvamune.

There is a larger supply of a smallpox vaccine known as ACAM2000 that can be used, but the CDC has warned against its use in people with weakened immune systems and certain skin conditions, and by pregnant women.

Pritzker’s office said that proclaiming the “state of disaster” allows the Illinois Department of Public Health to expand vaccine and testing capacities with the help of the Illinois Emergency Management Agency and via state and federal recovery and assistance funds.

“This proclamation will aid in facilitating the complicated logistics and transportation of vaccines across the state to reach the most impacted communities efficiently,” Pritzker’s office said.

“The declaration also authorizes emergency procurements to facilitate the state’s response. The proclamation takes effect immediately and is in place for 30 days.”