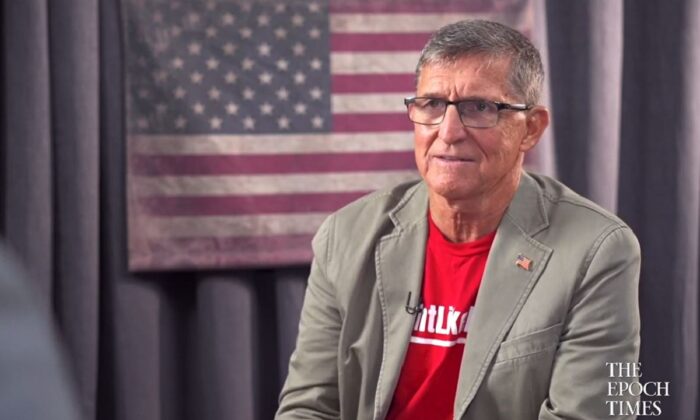 The flood of illegal immigrants that have entered the United States in the past several decades has contributed to the rise in drugs and drug addiction inside the country, former national security adviser and retired Lt. Gen. Michael Flynn says.

“We have a domestic problem that is fueled by large, large numbers of deadly drugs and large amounts of money,” Flynn said on EpochTV’s “Facts Matter” program.

The illegal immigration crisis has reached unprecedented levels under President Joe Biden, with the United States setting new records for illegal alien arrests at the U.S.–Mexico border for both a calendar year and a fiscal year. But the problem goes back 25 years, and has spanned administrations of both parties, said Flynn, who was the national security adviser under President Donald Trump.

If even just 10 percent of the illegal immigrants are criminals, that means a force that’s larger than the entire U.S. Marine Corps has illegally entered the country in recent years, Flynn said.

The criminals, often part of cartels, often go to cities and ply drugs, which has deepened the addiction problems there.

While some convicted criminals are deported, others are being allowed to remain in the United States under orders from top Biden administration officials, who have asserted that there is not enough manpower to deport all illegal immigrants that are convicted of additional crimes in addition to entering or remaining illegally.

Speaking in Florida, Flynn said he backed some of the moves Florida Gov. Ron DeSantis, a Republican, has made, but decried the busing of illegal immigrants from Texas and Arizona to Washington as a “publicity stunt” that is being cheered by the cartels. Texas Gov. Greg Abbott and Arizona Gov. Doug Ducey have been footing the bill for the buses, which has been described as putting pressure on Biden by sending illegal aliens to the city in which he lives. Washington Mayor Muriel Bowser recently requested National Guard assistance due to the influx.

In any case, the illegal immigration and drug issues require action at the federal, state, and local levels, according to Flynn.

“We need to protect our own damn borders. And that’s not just the border between Texas and Mexico, that’s the border between Ohio, and Illinois, or the states in our country that are non contiguous to an international border like Canada, or Mexico, right? I mean, every state has state sovereign rights to protect their own borders,” Flynn said.