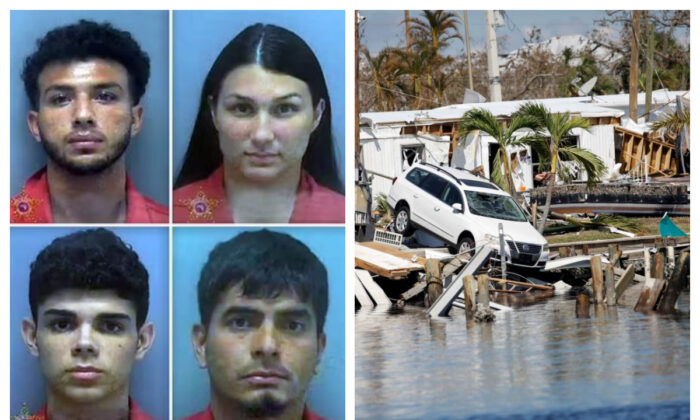 Authorities in Lee County, Florida, confirmed Tuesday that three people who were arrested for looting were illegal immigrants.

Marceno said that three of those individuals were illegally inside the United States while they were caught looting in Lee County, which was hammered by Category 4 Hurricane Ian last week. It’s not clear what location the suspects had targeted for looting.

“Three of these subjects are here illegally in this country—Robert Mena, Brandon Araya, Stephen Araya—all arrested for stealing bottles on Fort Myers Beach during the hurricane,” Marceno remarked, according to Fox News. “They were located and arrested. And I’m going to tell I’m not tolerating it again.”

The sheriff then issued a stark warning to would-be looters.

“I’m not playing. We’re not playing. We have law and order and great residents will be safe and secure. We’ve had arrests on these incidents,” he said. “You might walk in. You’ll be carried out.”

Other Florida officials, including Republican Gov. Ron DeSantis, have issued warnings about stealing from empty homes and businesses after the storm. DeSantis noted that some Florida residents have firearms.

“You never know what may be lurking behind somebody’s home,” the governor said last week. “And I would not want to chance that if I were you—given that we’re a Second Amendment state.”

Some residents also “boarded up all the businesses, and there are people that wrote on their plywood, ‘you loot, we shoot,’” DeSantis added. “At the end of the day, we are not going to allow lawlessness to take advantage of this situation.”

It comes as the number of storm-related deaths has risen in recent days because of the dangers posed by cleaning up and as search and rescue crews comb through some of the hardest-hit areas of Florida. Officials said that as of Monday, more than 2,350 people had been rescued throughout the state.

At least 79 people have been confirmed dead from the storm: 71 in Florida, five in North Carolina and three in Cuba since Ian made landfall on the Caribbean island on Sept. 27, a day before it reached Florida. After churning northeastward through the Sunshine State and moving out into the Atlantic, the hurricane made another landfall in South Carolina before pushing into the mid-Atlantic states.

In hardest-hit Lee County, Florida, all 45 people killed by the hurricane were over age 50.

The Epoch Times has contacted U.S. Immigration and Customs Enforcement, or ICE, for comment.