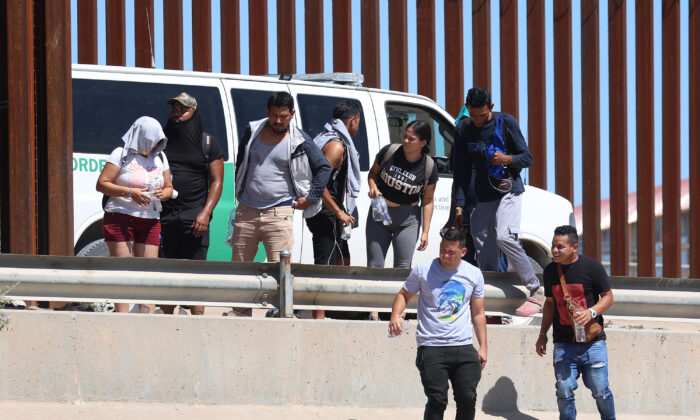 Venezuelan nationals walk along the border fence to a waiting Border Patrol van after illegally crossing the Rio Grande from Mexico, in El Paso, Texas, on Sept. 21, 2022. (Joe Raedle/Getty Images)
By Charlotte Cuthbertson

Border Patrol agents in the area of El Paso, Texas, have apprehended more than 38,500 illegal immigrants in the 21 days since Oct. 1—averaging almost 13,000 per week, according to provisional Customs and Border Protection (CBP) data obtained by The Epoch Times.

In January, agents in El Paso arrested an average of 4,500 per week.

As with the whole southern border, illegal crossings in El Paso have trended up all year; the region has become the new hotspot after the Del Rio, Texas, area for most apprehensions per month.

“If you think the lawlessness at the border and the millions illegally crashing it has been bad during Biden’s term so far, wait until the numbers keep rolling in for this FY. Already shattering records again,” the National Border Patrol Council wrote on its Twitter page on Oct. 24. The new federal fiscal year began on Oct. 1.

“We said months ago he was just getting started. And he was.”

The city of El Paso is receiving millions of dollars from the Federal Emergency Management Agency (FEMA) to feed, house, and transport the illegal aliens once they’re released by Border Patrol.

Since May, when the city issued an emergency ordinance, it has set up a mammoth operation in conjunction with local NGOs to provide thousands of illegal immigrants with meals, hotel rooms, and help with bus or plane tickets to their chosen destination.

More than 100 city employees are working full-time to assist with the operation, and several council members have expressed concern that local projects are being delayed because of the shift in resources.

Venezuelan nationals have made up the bulk of the sudden increase in illegal crossings into El Paso since August (up to 70 percent, according to El Paso’s city manager).

In September, more than 20,000 Venezuelan nationals turned up in El Paso; during the months of July and August, border agents had apprehended 611 and 3,539 Venezuelans respectively, according to CBP data.

On Oct. 12, the Biden administration began returning Venezuelans to Mexico and promised that 24,000 will be approved to fly directly into the United States. Still, the overall illegal border crossing numbers have yet to decline.

El Paso officials said that, traditionally, many illegal aliens have family members already in the United States, which means those family members can help pay for transportation and initial costs.

However, recently, up to 50 percent of the aliens that the city is assisting have no ties in this country—making it more burdensome to provide support.

Some city council members were pushing to declare a local disaster during a meeting at the end of September as the costs went through the roof.

However, Mayor Oscar Leeser said, “The White House has asked at this point not to [declare a disaster].”

Leeser said he, too, is against a disaster declaration, as is U.S. Rep. Veronica Escobar (D-Texas), and El Paso County Judge Ricardo A. Samaniego.

The White House didn’t respond to a request for confirmation of Leeser’s claim.

Leeser said a declaration is unnecessary because he’s working with the Biden administration on solutions. As the issue began to escalate, Leeser said the federal government increased its flights transporting illegal immigrants to other parts of the country—easing the drain on El Paso city resources.

Leeser said as long as the flights keep departing and the city can absorb the remaining aliens without Border Patrol having to release them onto the streets, a disaster declaration is unnecessary.

El Paso Deputy City Manager Mario D’Agostino said CBP had increased its flights of illegal aliens out of the city to up to six per day, as well as multiple charter bus trips.

“Now, instead of releasing to the streets, they’re using a lot more chartered flights and buses,” D’Agostino said during the Sept. 27 meeting.

City Manager Tommy Gonzalez said FEMA has pledged $2 million upfront to cover costs from Oct. 1, but once that runs out (potentially within two weeks), the city will need to continue dipping into its general fund before being reimbursed.

During the Sept. 27 meeting, the city council approved, in a 6-2 vote, the use of up to $6 million from the city’s general fund to pay for charter buses to transport illegal aliens to cities around the United States, with the expectation that the federal government will reimburse the funds.

Council members approved the bus contract to be awarded to American Coach and Limousine Inc.

“The award of this contract will allow to transport migrants to other cities as needed,” the resolution states.

From January through September, Border Patrol agents in the El Paso area have apprehended a total of 258,835 illegal aliens entering from Mexico, according to CBP data.