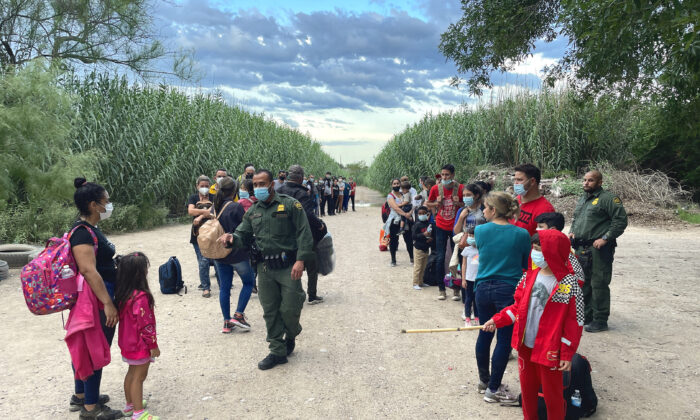 Customs and Border Protection (CBP) apprehended 180,034 individuals illegally entering the United States in May, the highest number seen in a single month in 21 years.

The agency said the majority, more than 112,000, were expelled under the Title 42 emergency health provision.

Former President Donald Trump implemented Title 42 in March 2020, which effectively closed the border to nonessential travel in an attempt to mitigate the spread of COVID-19.

It allowed for Border Patrol to turn back illegal border-crossers almost immediately, rather than for them to be placed in Immigration and Customs Enforcement (ICE) custody for a more protracted process through deportation proceedings under Title 8.

The Biden administration has already exempted unaccompanied children and many family units from Title 42, whereas single adults from Spanish-speaking nations are almost all still subject to immediate expulsion, according to Troy Miller, acting commissioner for CBP. But Border Patrol is also encountering more illegal aliens from non-Spanish speaking nations, Brazil and Haiti in particular, which Miller suggested aren’t being expelled.

The number of unaccompanied minors and individuals within family units dropped in May compared to April, but still made up more than 33,000 apprehensions.

The Title 42 restrictions have triggered a higher than normal recidivism rate of illegal crossings as single adults repeatedly attempt to cross and evade capture, according to CBP.

During the month of May, 38 percent of Border Patrol apprehensions were individuals who had at least one prior encounter in the previous 12 months. The average one-year re-encounter rate during the previous five years was roughly 15 percent, CBP said.

In addition, Border Patrol detected, but didn’t capture, more than 51,000 illegal border-crossers in May, according to statistics obtained by The Epoch Times.

The Biden administration is under pressure to end the Title 42 restrictions and has hinted it would do so. However, the head of ICE has said its removal is his biggest concern.

“Title 42 is absolutely critical,” ICE Acting Director Tae Johnson said during a congressional hearing on May 13. “I don’t think it’s a situation where it’s going to just be lifted electively—we will be mandated, through some sort of court order, to lift it.”

Once Title 42 is revoked, the 3,500 to 3,800 single adults that Border Patrol is currently arresting on a daily basis will have to be processed by ICE.

At the same time, ICE has less capacity than it did during the previous border surge in 2019. ICE had approximately 55,000 detention beds in 2019. However, their capacity was reduced to 30,000 beds in the fiscal 2021 appropriations package—enough beds for less than two weeks at the current rates of alien arrivals.

Vice President Kamala Harris is currently traveling to Mexico and Guatemala on a trip that the Biden administration said was to discuss the “root causes” of the vast numbers of illegal immigrants entering the United States from that region.

“We have, and it is a legitimate correct conversation and concern, which is to address what is happening at our America’s southern border, and no question about that. We cannot have that question and have that conversation without also giving equal weight and attention to what is causing that to occur,” Harris said while in Guatemala on June 8.

Pressed on why she hasn’t yet visited the U.S. southern border, Harris said she plans to visit the border “at some point.”

Guatemalan President Alejandro Giammattei said in an interview with CBS on June 6, before Harris’s visit, that he would like to see the United States impose stronger penalties on human smugglers.