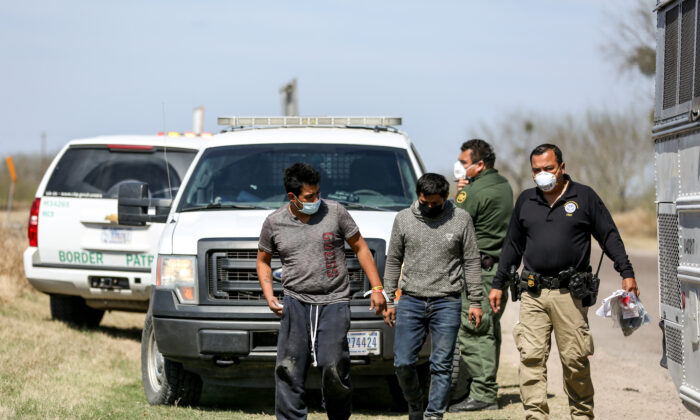 In February—despite a week of freezing weather—Border Patrol apprehended 100,441 illegal border-crossers along the southern border, according to Customs and Border Protection (CBP).

Another 26,000 people evaded capture, according to Jaeson Jones, a former Texas Department of Public Safety captain who received the provisional CBP data from internal sources, which was reviewed by The Epoch Times.

The February number is almost triple the apprehensions from February 2020, when Border Patrol caught almost 37,000 people, while in 2019, on the cusp of the most recent crisis, the number was almost 77,000.

Many of those crossing now are unaccompanied minors (9,457 in February), who can’t be turned back if they’re from a country other than Mexico.

Minors who cross the border illegally are meant to be passed to the Department of Health and Human Services (HHS) within 72 hours, but the sheer number of minors has overwhelmed the system. Acting CBP Commissioner Troy Miller told media on a March 10 call that he wasn’t going to discuss how long children are being held in Border Patrol custody.

HHS has just opened a second facility for the burgeoning number of minors.

When asked what he thought was driving the trend, Miller said, “There’s certainly economic instability in the region that’s unparalleled.”

“All you have to do is look at the pandemic … the COVID rate infections down in South and Central America,” he said. “We recently had a hurricane, continued violence, unemployment. So if you put all those issues together, … you’re going to see folks looking for a better way of life.”

Miller said he wanted to be clear that the border is not “open” and that migrants shouldn’t listen to human smugglers who are saying otherwise.

“We are building an orderly immigration system and doing so in a way that protects public health during the global COVID pandemic,” Miller said. “We’re moving as fast as we can to rebuild.”

Biden has said there’s no crisis on the border and that “we’ll be able to handle it,” when asked by reporters.

On March 8, the Department of Homeland Security (DHS) said it’s seeking volunteers from among its agencies to assist in dealing with an “overwhelming” surge at the U.S.–Mexico border.

“Today, I activated the Volunteer Force to support Customs and Border Protection as they face a surge in migration along the Southwest Border,” DHS Secretary Alejandro Mayorkas said in an email to employees on March 8, obtained by several news outlets.

Texas Gov. Greg Abbott held a press conference near the U.S.–Mexico border on March 9, where he raised the alarm about a growing crisis after meeting with border officials.

The Republican governor blamed Biden’s immigration policies, saying they invite illegal immigration and are contributing to the crisis, which “will grow increasingly worse by the day.”

Among those arrested by Border Patrol since Jan. 1, more than 800 criminals have been identified, including 78 sex offenders and 62 gang members, Abbott said.

On March 6, Abbott launched an operation to counter the growing crisis, activating and deploying National Guard troops and other law enforcement officers to the border to combat drug and human smuggling.

Update: This article was updated on March 10 to include final CBP numbers and quotes by acting CBP Commissioner Troy Miller.