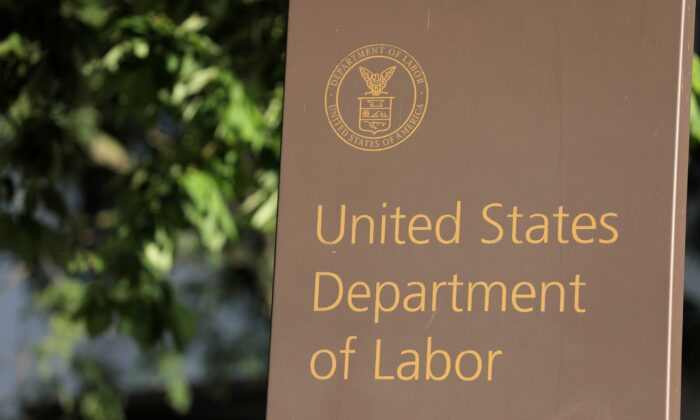 Signage is seen at the U.S. Department of Labor headquarters in Washington on Aug. 29, 2020. (Andrew Kelly/Reuters)
US

More than $77 billion of the unemployment insurance (UI) program’s total of $413 billion in payments in 2021 were made improperly, according to a report from the Department of Labor’s Office of Inspector General (IG).

“Additionally, DOL published an unknown payment rate of 0.21 percent, which resulted in estimated unknown payments of $865 million. These estimates were based on a statistical estimation approach that met a 95 percent confidence level, plus or minus 3 percent,” the report said.

The IG report was prompted by requirements of the Payment Integrity Information Act of 2019, which requires federal departments and agencies to establish and report to the Office of Management and Budget (OMB) improper payment rates in government benefit programs, as well as annual targets for reducing those rates.

The 18.71 percent rate of improper UI payments in 2021 represents a significant increase for the program, which saw a steadily improving trend during the previous four years of President Donald Trump’s administration.

Rep. Rick Allen (R-Ga.), a member of the House Education and Labor Committee, told The Epoch Times on July 6 that he’s co-sponsoring legislation to address examples of wasteful federal spending like that highlighted by the IG report.

“It’s unacceptable that criminals utilized a global health crisis to defraud the United States government’s unemployment programs. Even worse, the misguided Biden administration policies, which discouraged people from going back to work, incentivized scammers to steal more money from the American taxpayer,” he said.

“Congress must now fulfill its oversight duties and help hold these criminals accountable. I am a proud co-sponsor of [Texas Republican] Rep. Kevin Brady’s Chase COVID Unemployment Fraud Act, which would empower the states to recover the money lost to fraud.”

Brady is the top Republican on the House Ways and Means Committee that oversees unemployment insurance.

Other Republicans on the Ways and Means panel also blasted the improper payments and lauded the measure originally introduced by Brady.

Rep. Jackie Walorski (R-Ind.) told The Epoch Times that “it is painfully obvious that brazen criminals capitalized on pandemic relief programs and stole billions from hardworking American taxpayers,” and she urged Biden and congressional Democrats “to work with us to take this crisis seriously, expose fraud, and hold criminals accountable. We must send a clear signal that fraud will not be tolerated.”

Similarly, Rep. Drew Ferguson (R-Ga.) said, “House Democrats refused to hold a single Ways and Means oversight hearing to address the growing problem of unchecked improper payments,” adding that “it shouldn’t surprise folks that a new, big-government program that incentivizes folks to not return to work—and had zero oversight—is ripe for fraud.”

And Rep. Adrian Smith (R-Neb.) told The Epoch Times that “the Biden administration and Democrats in Congress have shown no interest in holding these fraudulent actors accountable. That is why I am an original co-sponsor of the Chase COVID Unemployment Fraud Act, a bill to protect taxpayers by clawing back funds and recovering these improper payments. This is a priority for me now, and it will certainly remain a priority when Republicans control the House.”

On the other side of Capitol Hill, Sen. Joni Ernst (R-Iowa), the Senate’s most visible foe of waste, fraud, and abuse in the government, told The Epoch Times, “It’s no surprise that we are seeing a record level of fraud and abuse of taxpayer dollars being reported in the wake of wasteful and unsupervised government  spending under the guise of COVID,” said Ernst. “The federal government needs to take every step possible to recover fraudulent payment and put safeguards in place to stop future abuses like this from happening again.”

Both the FPUC and PEUC programs were included in the Coronavirus Aid, Relief and Economic Security (CARES) Act of 2020, the $2.2 trillion emergency legislation approved by Congress and signed into law by Trump in March 2020.

The purpose of the CARES legislation was to provide a massive economic stimulus to offset the slowdown in the national economy that resulted from the emergency measures enacted by the government in response to the COVID-19 pandemic that has to date killed more than 1 million Americans.

Under the CARES Act, the FPUC and PEUC provided $600 per week in additional federally funded unemployment benefits through July 2020. The program was extended but with a reduced weekly benefit of $300, which expired on Sept. 6, 2021.

The IG report was prepared by KMPG LLP, under contract to the government.

In response to the report, DOL acknowledged that the inclusion of the CARES Act programs makes it difficult to measure improper payments. The department insisted that the figures it provided to OMB were accurate as presented, but could include an overestimate of the improper payments under the regular unemployment insurance program.

The department said it will revise its calculations in preparation for the next assessment and pledged to “take the IG’s concern, which we share, in this [revised] methodology to ensure transparent, accurate and cost-effective reporting of this expired program.”