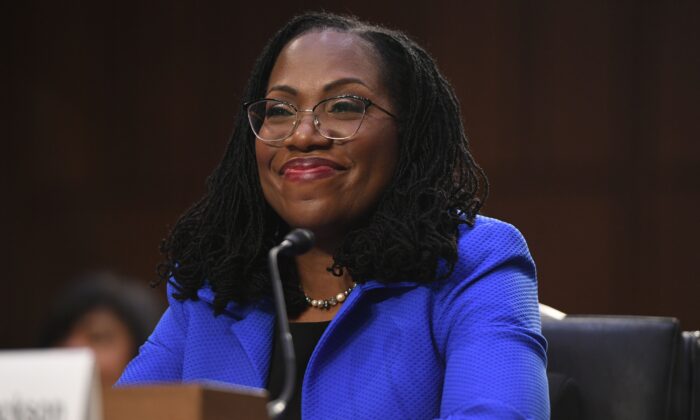 Judge Ketanji Brown Jackson arrives to testify before the Senate Judiciary Committee on her nomination to serve on the Supreme Court, on Capitol Hill in Washington on March 23, 2022. (Saul Loeb/AFP via Getty Images)
Viewpoints

If Ketanji Brown Jackson Can’t Define ‘Woman,’ Does She Belong on the Supreme Court?

During the three days of marathon hearings for Joe Biden’s first nominee to the Supreme Court, a few things have become abundantly clear.

First, there is a blatant double standard when it comes to how the media portrays conservative justices vs. liberal justices.

Second, because Ketanji Brown Jackson happens to be a black woman, anyone who does not automatically support her nomination is tarred and feathered as a racist or sexist.

Third, and most importantly, Ketanji Brown Jackson’s answers (or lack thereof) to many relevant questions during the hearings calls into question whether or not she actually deserves a lifetime appointment on the nation’s highest court.

Perhaps the most stunning response to a rather simple question in the history of U.S. Supreme Court nomination hearings occurred when Sen. Marsha Blackburn (R-Tenn.) posed this softball: “Can you provide a definition for the word ’woman’?”

To this question, which any third-grader could articulate an answer to, Ketanji Brown Jackson, responded, “No, I can’t.”

To her credit, Blackburn gave Jackson another shot at this layup, countering with, “You can’t?”

To which Jackson responded: “Not in this context. I’m not a biologist.”

Jackson’s reluctance to answer Blackburn’s very straight-forward question demonstrates she is not a neutral arbiter guided by the truth, but a political being first and foremost.

Moreover, it displays her penchant for putting politics over and above all else.

A few years ago, before men like Lia Thomas declared themselves women and turned the world upside down, there was a societal consensus that men and women are fundamentally different for myriad reasons, beginning with the fact that only women can bear children.

However, as we have witnessed over recent years, even that essential truism is no longer an accepted fact according to many on the left.

For those who may have forgotten, many on the left (including the Biden administration in regards to maternal health care guidance) now reject the term “mother” in place of “birthing person.”

Never mind that only “mothers” can give birth.

Yet, that is just the tip of the iceberg.

The Biden administration also went to great lengths to celebrate the appointment of Rachel Levine, who is a biological man, as the first “female” four-star admiral in American history.

And, this month, USA Today had the audacity to name Levine among its list of “women” of the year. When the satire site, The Babylon Bee, tweeted in jest that Rachel Levine is its “man of the year,” Twitter pulled the plug on their account, demanding they delete the tweet or they will be banned from the platform forever.

So, if we now live in a world wherein potential Supreme Court justices cannot determine that men and women are different based on biological facts, what else could be up for debate?

In other words, if the indisputable fact that men are men and women are women is now in question, isn’t every other reality now open to interpretation?

And, if so, what does that mean for the future of jurisprudence?

For example, if a war were to break out and a draft were to take place and all eligible males were forced to enter into a draft lottery, what could stop any man from declaring himself a “woman,” and, therefore, become ineligible for the draft?

Although most leftists don’t want to even entertain these types of scenarios, it is well worth having for the sake of truth.

After all, if the left can rewrite the definition of man and woman, what other unequivocal truths can they turn upside down?