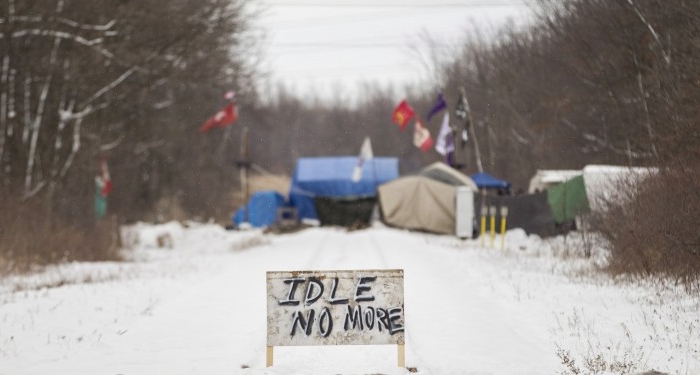 First Nations protesters continue to blockade the CN tracks in Sarnia, Ont., on Wednesday, January 2, 2013, after a court injunction to have them move was issued over the holidays. The protest, part of the Idle No More movement, has blocked the tracks for 13 days. (The Canadian Press/ Geoff Robins)
US

As the Idle No More movement continues into its eighth week, the loosely knit network of protests continues to widen its call for a “revolution which honours and fulfills Indigenous sovereignty which protects the land and water.”

And as it grows it has picked up many supporters, capitalizing on the same brand of Internet-based activism that saw Occupy protests staged across North America and around the world.

The current protests were sparked by a group of women concerned about the government’s last budget bill but have now grown beyond Canada’s borders.

The movement’s official website, which initially attempted to provide a calendar of Idle No More events, has since posted a note saying that due to the number of protests and events now taking place, it can no longer track them.

A link to a secondary map-based calendar shows activities across North America, Europe, and several countries around the world.

Wednesday saw the movement inspire a rail blockade by members of the Listuguj Mi’gmaq community in Quebec, who have vowed to stop rail traffic except for passenger trains at the tracks at Pointe-à-la-Croix for as long as necessary.

Other blockades have disrupted highway traffic across the country, with similar railroad blockades in southern Ontario.

Some protests have taken the form of flash mobs joining in a traditional Native American round dance inside Walmart stores in several cities in Canada and the United States.

Spence was on Day 23 of her hunger strike Wednesday.

An unnamed chief told APTN that First Nations people were increasingly frustrated by poverty and mining inside treaty territories.

Like the Occupy movement, Idle No More has been facilitated by social media and Internet collaboration. And like Occupy, it has eschewed formal organization, taking a horizontal approach that has seen discussion on Facebook and Twitter encompass wide-ranging issues and sometimes hotly contested viewpoints.

On Monday, the official Idle No More website posted a statement distancing the movement from attempts by First Nations leaders to claim any form of responsibility for the ongoing demonstrations.

“The Chiefs have called for action and anyone who chooses can join with them, however this is not part of the Idle No More movement as the vision of this grassroots movement does not coincide with the visions of the Leadership,” the posting said.

Discussions on social media and statements from protesters quoted in the media have reflected disappointment with aboriginal governments and existing organizations.

“[Idle No More] seems to be a rejection of aboriginal leadership, a rejection of local chiefs and chiefs on the national stage,” Daniel Salée, a professor at Concordia University’s School of Community and Public Affairs, told the National Post.

“People seem to feel as though their leaders aren’t working in their best interest or that they simply aren’t getting the job done.”

Support for the movement has come from former Occupy protesters, opposition parties, and groups calling for an investigation of robocalls placed during the last election. Statements have come in from around the world to support the action.

While the founders of Idle No More have brushed aside official endorsements from First Nations leaders, the aim of the group echoes demands that the federal government honour historic treaties signed by the Crown.

A mission statement on the Idle No More website declares Canada has grown wealthy through land and resources while not honouring treaty agreements covering lands from which the resources are obtained.

The organizers contend the federal government’s efforts to fast-track resource projects will circumvent treaty rights while poisoning the environment.

“Colonization continues through attacks to Indigenous rights and damage to the land and water. We must repair these violations, live the spirit and intent of the treaty relationship, work towards justice in action, and protect Mother Earth,” reads the mission statement.

Attawapiskat made headlines in late 2011 after its leadership declared a state-of-emergency due to dropping temperatures and lack of housing in its remote northern Ontario community.

Spence has vowed to survive on only fish broth and herbal tea until she has a meeting set with the PM. She has said she is willing to starve herself to death. Others, including Raymond Robinson, 51, an elder with the Cross Lake First Nation, have joined her in that hunger strike.