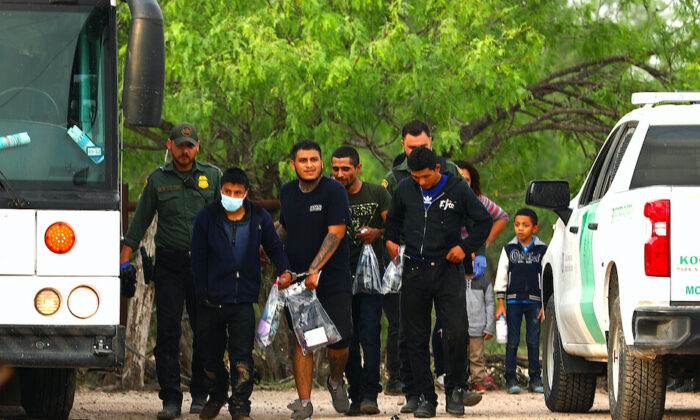 ICE Unable to Track Most Illegal Immigrants Released Into Country

As thousands of illegal immigrants are released into the United States every week, the agency responsible for enforcement is unable to keep tabs on most of them.

Immigration and Customs Enforcement (ICE) Acting Director Tae Johnson admitted to Congress that “there’s certainly some gaps in our ability to track” illegal immigrants being released.

After being apprehended at the border, illegal immigrants are processed by Customs and Border Protection (CBP) to determine who they are and whether they’re subject to being immediately turned back under the current Title 42 public health provision.

Single adults from Spanish-speaking nations are almost all subject to immediate expulsion under Title 42, according to Acting CBP Commissioner Troy Miller. But Border Patrol is also encountering more illegal aliens from non-Spanish speaking nations, in particular Brazil and Haiti.

Of the 178,000 illegal border crossers encountered in April, around 62 percent were expelled quickly under Title 42, according to CBP data.

The remaining 38 percent (or 68,000 individuals) were released into the interior (family units), into Health and Human Services custody (unaccompanied minors), or ICE custody (single adults from non-Spanish-speaking nations).

“For individuals that are just released with a notification to report to ICE or to show up in court, then our ability to track those folks quite closely is much more limited,” Johnson said during a congressional hearing on May 13.

About 20,400 individuals have been released with a Notice to Report, and Johnson said ICE has no way to track those people or where they plan to reside, as the agency’s system doesn’t link to the information Border Patrol collects at the initial intake facility.

“Once they report to an ICE office, they’re put into our system of record, and at that point we can track those folks,” Johnson said. “But otherwise, we would just have to get a list from Border Patrol of the 20,000 cases and check them pretty regularly.”

Johnson said ICE has more success tracking individuals that are released under the alternatives to detention program, including those wearing an ankle monitor.

However, illegal immigrants regularly cut off their ankle bracelets or fail to honor their obligation to check in with ICE or turn up in court.

“Based on the number of individuals that we enrolled in alternatives to detention in FY20, we had about 11,000 individuals abscond from the program,” Johnson said. So far, in fiscal 2021 through March, Johnson said about 2,700 have absconded.

Under the agency’s narrowed criteria for priority removal, most of those who abscond won’t be a priority for ICE to track down unless they commit an aggravated felony. Nationwide, the agency arrested 645 illegal aliens for removal in March and 1,152 in April, Johnson said.

The Fall of Title 42

Johnson’s biggest concern is the impending removal of Title 42.

President Donald Trump implemented Title 42 in March 2020, which effectively closed the border to nonessential travel in attempts to mitigate the spread of COVID-19.

It allowed for Border Patrol to turn back illegal border crossers almost immediately, rather than be placed in ICE custody for a more protracted process through deportation proceedings under Title 8.

Once Title 42 is revoked, the 3,000 to 3,500 single adults that Border Patrol is currently arresting on a daily basis will have to be accommodated by ICE.

At the same time, ICE has less capacity than it did during the previous border surge in 2019. ICE had around 55,000 detention beds in 2019; however the capacity was reduced to 30,000 beds in the fiscal 2021 appropriations package.

“Title 42 is absolutely critical,” Johnson said. “I don’t think it’s a situation where it’s going to just be lifted electively—we will be mandated, through some sort of court order, to lift it.”