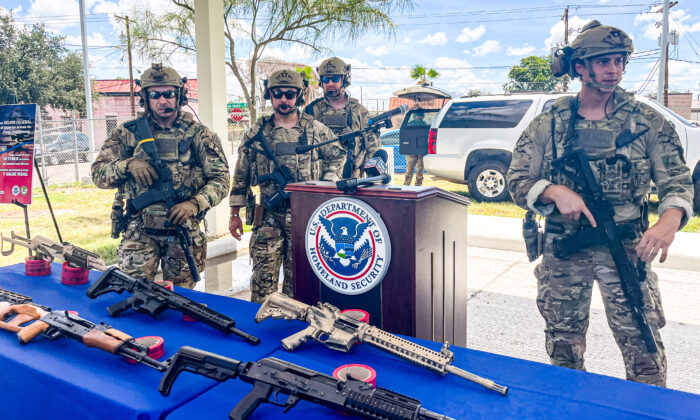 LAREDO—At the same time that Mexican cartels appear to be gearing up for war, Homeland Security officials are making a public plea for information on suspicious cross-border activity.

“Obviously, arms going to Mexico is a big part of that—that building up between the cartels,” said Timothy Tubbs, acting special agent in charge of Homeland Security investigations (HSI) in San Antonio. HSI is the investigative arm of Immigration and Customs Enforcement (ICE) and is responsible for investigating transnational crime and threats.

“We’re hoping by stopping these weapons going to Mexico we can not only reduce the violence in Mexico, but allow the government of Mexico to do their job in combating the cartels,” Tubbs said at a press conference in Laredo on July 2.

“By reducing the violence in Mexico, we will also keep the violence from crossing over to the U.S. and keep that from rising up in the U.S.”

Skirmishes between cartels have ramped up in recent months. Jaeson Jones, former captain in the Texas Department of Public Safety, said the United States should brace for a full-scale cartel war in the coming months that will likely spill across the border.

Jones said Cartel del Noreste (formerly known as Los Zetas) is currently fracturing, while the Jalisco New Generation Cartel and the Gulf Cartel are joining forces to increase their territory. Control of any portion of the Mexican side of the U.S.–Mexico border is worth billions of dollars to cartels as they smuggle illicit goods and persons.

“The war is coming. And that’s why you saw some of this violence and skirmishes, both in Reynosa and in Miguel Alemán, this week,” Jones told The Epoch Times on July 2. “That’s nothing compared to what we’re going to be seeing.”

Meanwhile, cartels are stocking up on firepower. Cartel purchases of military-grade weapons from Central and South American countries, especially Guatemala, are most concerning, Jones said.

Operation Without a Trace

Joseph Lestrange, acting deputy assistant director of HSI’s transnational organized crime division, said weapons being smuggled from the United States to Mexico often begin as legal purchases that are then illegally transferred to others and often financed with cash from drug trafficking proceeds.

HSI has arrested U.S. citizens and Mexican nationals smuggling weapons into Mexico. The Laredo area accounts for 30 percent of HSI’s arms smuggling arrests along the border, according to Tubbs.

“We had a seizure of 31 firearms, 6,500 rounds of ammunition, and arrested a Mexican national who’s being prosecuted for smuggling.”

Lestrange said anyone who violates U.S. or Mexican firearms laws could be sentenced to 30 years in prison.

Operation Without a Trace was launched in November 2018.

Lestrange said HSI is looking for information on “the who, the what, the where, the when.”

“It could be a live tip where, ‘Hey, I know somebody that’s in a car right now, driving to the southwest border, this is the license plate,'” he said. Homeland Security can then try to intercept the car on its way to the border.

Other tips, for example, Lestrange said, could include information on someone who has straw buyers all over the country to make firearms purchases, then consolidates the firearms in a particular location and arranges to smuggle them to Mexico.