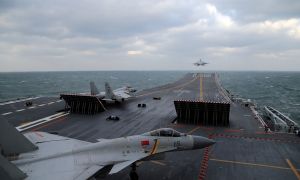 Ian Easton: An Invasion of Taiwan Would Be Nothing Like We’ve Seen in Modern Warfare

How does an island the size of Maryland defend itself against the Chinese military? As a new focus, we discuss Taiwan’s defense strategy—especially following China’s aggressive show of power.

Taiwan’s conquest is a central mission of the Chinese regime, the Chinese Communist Party.

Joining me to discuss the defense of Taiwan is Mr. Ian Easton, senior director at the Project 2049 Institute. His newest paper, Hostile Harbors, explores the specific steps both sides would want to consider when it comes to the war in the Taiwan Strait, as well as details on the difficulties of attacking Taiwan and defense strategies.

Easton also talks about the overall role Taiwan plays in comparison to Afghanistan. He also discusses what arms sales from the United States mean to the Taiwanese government and how a war in the Taiwan Strait would be nothing like what we know of war.