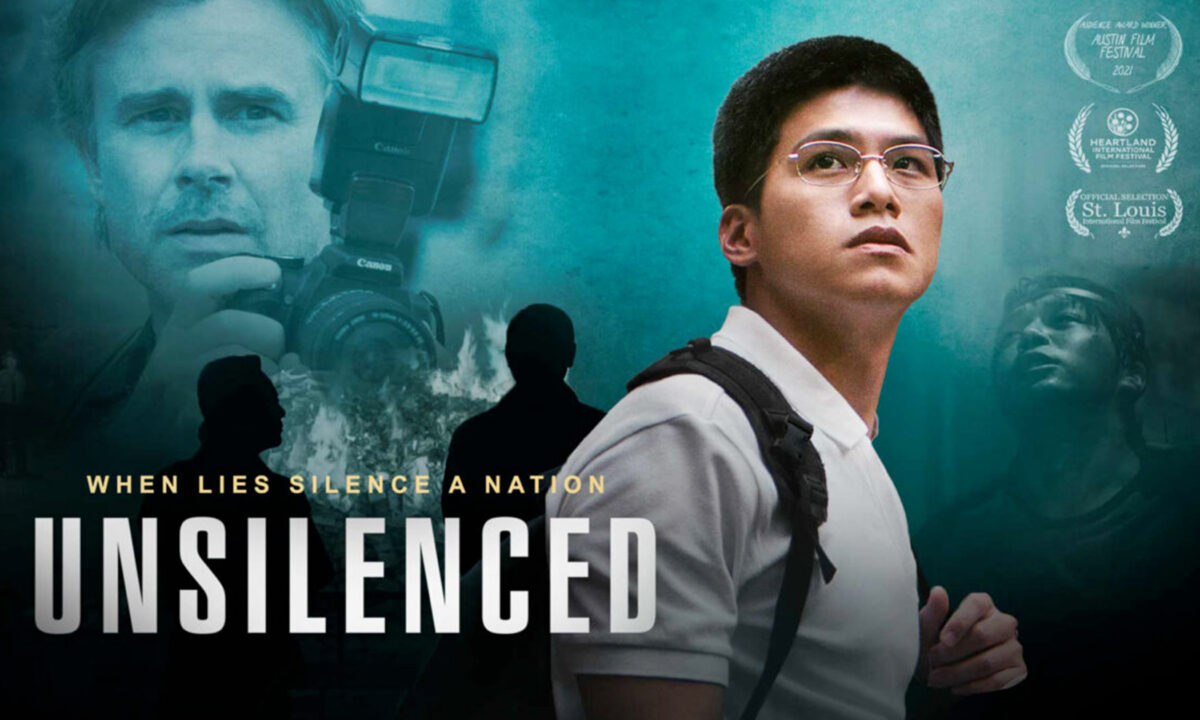 “Unsilenced” has just been digitally released after a successful theatrical run in North America. Knowing it addresses a topic close to my heart—courage to stand up and defend the truth in the face of repression—I rented the movie on Friday night, and finally got the time to watch it Sunday night.

All I could think of was, would I be able to endure such excruciating torture for the sake of defending the truth, to protect others, to safeguard the future of humanity, or would I cave to the immense pressure?

In a comfortable environment, at least in comparison to that of China, it’s easy for one to say they wouldn’t give in to such pressure if it were to happen to them, but it’s surely another thing when one actually comes face to face with such horror.

The realization that I just may not have the required level of inner strength and resolve I thought I’d have if faced with the agonizing torture I saw in the film—and tried to imagine living through myself—had me tossing and turning until the wee hours of the morning.

In this film’s case, that horror is the persecution faced by Falun Gong adherents in China who dare to hold tight to their faith and defend the truth, even after being captured and tortured with cruel methods and instruments—a tool employed by the Chinese Communist Party (CCP) to force from the prisoner of conscience a renunciation of their faith or a revealing of the name or whereabouts of a fellow practitioner of faith.

“Unsilenced” is Peabody award-winning director Leon Lee’s most recent movie about a group of innocent students of Tsinghua University in Beijing who risk everything to defend their faith and uphold the truth. Gaining the help of a sympathetic and conscientious American journalist stationed in Beijing, they find a way to expose the CCP’s lies and deadly propaganda against Falun Gong (Falun Dafa) via international media, even at the risk of prison, torture, and quite possibly death.

Based on true events that occurred in China in 1999, at the beginning of the CCP’s crackdown on Falun Gong, the film follows four students, who, at the outset, we see as happy and carefree, riding their bicycles and racing each other in all their youthful innocence, studying hard at university, and using their spare time to go to the local park to practice their meditative Falun Gong exercises.

But everything changes when the CCP launches a sudden persecutory campaign aimed at eradicating the peaceful practice.

Churning out lies and staging false incidents meant to incite hatred against Falun Gong, the CCP closes in on any adherent who dares to counter the regime’s narrative about the spiritual practice. We then see the film’s protagonist, university student Wang, and his friends swept up in a sudden whirlwind of hot pursuit on their tails as they make the decision to go with their conscience and speak the truth rather than remain silent over the crimes taking place behind closed doors.

What most stood out to me about the film was the varying degrees of courage each of the four students was able to summon from deep within. Three of them are depicted as demonstrating some degree of fear and wavering at certain points throughout the traumatic unfolding of events, while Wang (Ting Wu), one of Tsinghua University’s top engineering students, appeared to remain wholeheartedly steadfast in his resolve to get the truth out to the world and restore the good name of Falun Gong, from beginning to end; even while enduring torture and risking never seeing his young wife—one of the four students—and his new baby daughter again.

At one point, without hesitation, Wang used himself as a distraction for the police so as to save the journalist assisting him and one of the other students from getting arrested, knowing full well it would mean arrest and torture for himself. His selfless actions were an embodiment of the tenets of Falun Gong—truthfulness, compassion, and forbearance.

While one student began as one of the most fearless, she caved to excruciating sexual torture employed by the prison guards after being captured for hanging a banner over a roadway bridge, and to her later regret, revealed the identity of the other two students involved; yet, she rejoined the group’s efforts as soon as being released from prison and risked being jailed and tortured again. After what she’d already been through, that’s remarkable!

On the other hand, we see one of the students start off with fear and reservation about speaking up for the truth—lest he be kicked out of university for defending Falun Gong, just like his three friends were—but then change his mind after he couldn’t stomach lying to a large assembly of students and professors at the university, where he was being forced to bad-mouth Falun Gong and his friends who’d been expelled. After then joining the other three students in their courageous actions to bring the truth to light, he was captured and subjected to prolonged and incremental electrocution that was meant to break his spirit and get him to reveal the exact details of their grand plan.

The film also has one sympathize somewhat with—or at least come to truly feel and understand the reality of—the awful predicament many unwilling accomplices to the persecution face in China, and perhaps even outside of China. This is conveyed in the sweet and likable character Min (Anastasia Lin), an undercover agent for the CCP unwillingly assigned to spy on the movements of American journalist Daniel Davis (Sam Trammell), as his assistant. Daniel himself appears to understand the entanglement Min is in, not to mention the complexities of his own predicament, when her cover is blown and yet he doesn’t reveal he knows, so as to buy time to action his and the students’ plan, but perhaps also to protect her from the wrath of her CCP overlords should they find out he knows she’s a spy.

We’re also drawn to sympathize with Wang’s university professor Zang (Chen-Jun Cheng), who, after having experienced a terrible loss in the 1989 Tiananmen Square massacre, feels taunted over yet another persecution of innocent people and sympathizes and supports Wang and Falun Gong, despite CCP pressure on him and the university to toe the party line on the Falun Gong narrative. Nonetheless, though he knows the attacks on Falun Gong are baseless and a familiar CCP tactic to eradicate anything that appears to be an adversary to the party’s ideology, we see his support of Wang and Falun Gong is limited to a quiet, nonpublic display.

By contrast, in the evil character of Secretary Yang (Tzu-Chiang Wang), we get a taste of the ruthlessness and total lack of humanity of those who’ve been totally won over by power, self-gain, and an utter disregard for truth in this persecution—aren’t they just tools or pawns for the CCP, bound to self-destruct as they refuse to retrieve any speck of conscience they have left? Hard, stone cold, and unimaginably cruel, Secretary Yang will send shivers down your spine as he goes about devising plots to eradicate Falun Gong with the encouragement and praise of the CCP’s higher-ups, employing torture tactics of the worst kind to break the spirit of the most daring and courageous adherents.

But we do get to see where his time is up and that his judgment day finally arrives.

Unsilenced can now be watched on Vimeo, Amazon, iTunes, Google Play, and EpochTV.

Peta Evans
Follow
Peta Evans is a writer for The Epoch Times. She covers inspiring stories about people, tradition, and human rights.
SHARE
Friends Read FreeCopyFacebookTweet
You May Also Like