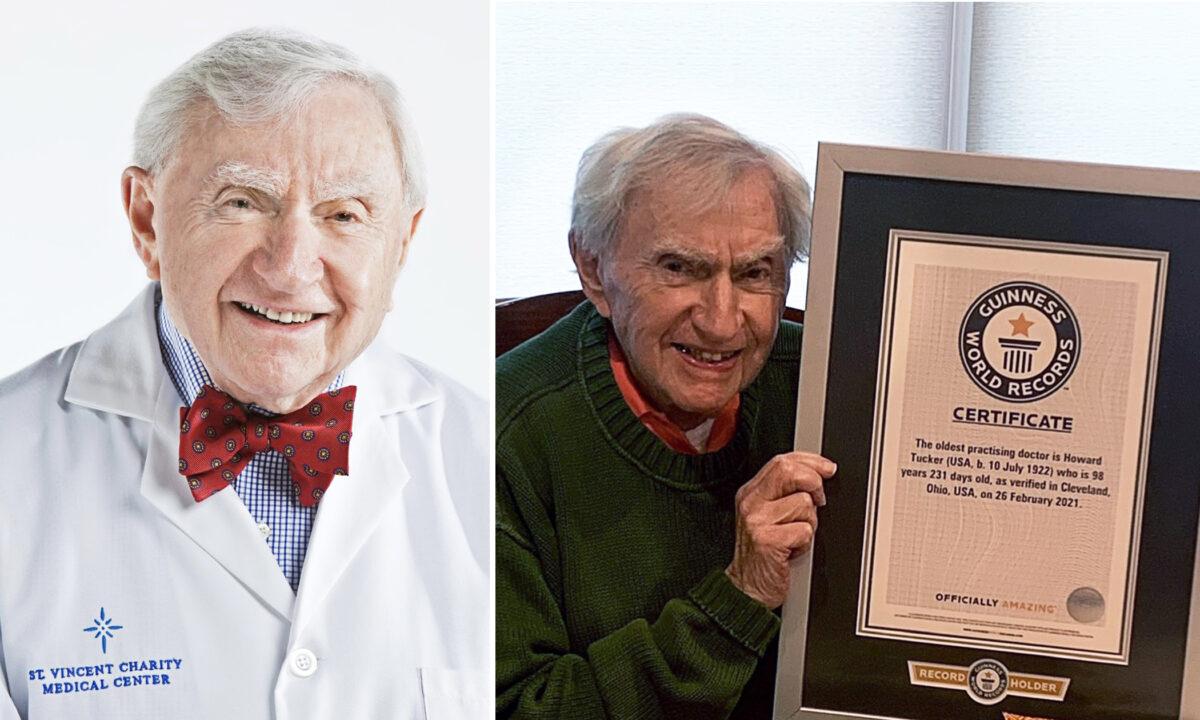 A 100-year-old neurologist, with a Guinness World Records title for being the world’s oldest practicing doctor, shows no signs of wanting to retire.

“The challenge of thinking through a case and getting to help patients, as well as teaching the next generation of neurologists, never gets old,” Dr. Howard Tucker of Cleveland, Ohio, told Guinness World Records.

Tucker made history as the world’s oldest practicing doctor on Feb. 26, 2021, at 98 years and 231 days of age. It was Tucker’s idea to apply for the title, which he did with the help of his grandson, Austin.

His grandson has made him a TikTok star by creating a TikTok handle where followers can see the doctor in action, NewYork Post said.

With 75 years in the field, the healthy centenarian, who is a married father of four with ten beloved grandchildren, only recently stopped seeing patients. However, he still teaches medical residents at St. Vincent Charity Medical Center, in his hometown of Cleveland, twice a week.

Born on July 10, 1922, Tucker lived with his parents and one brother through the austerity of the Great Depression. But due to his family’s sacrifices he could pursue his first passion for playing the violin and upright bass, before choosing medicine as a career in high school.

He earned his undergraduate degree from The Ohio State University before enlisting in the U.S. Navy during the Second World War, later serving in the Korean War as Chief of Neurology for the Atlantic Fleet. Back on American soil, he became an assistant professor at a Cleveland university and a neurology instructor at The Neurological Institute of New York—Columbia University Irving Medical Center, simultaneously, traveling between both cities each week.

He met Sue, a former student, four months after her graduation at a New York diner one afternoon. The two of them struck up a lovely conversation, eventually falling in love. They married in 1957, in White Plains, New York, and moved back to Cleveland to start a family.

Tucker made a name for himself for his involvement in the famous “Sleeping Beauties” medical case of 1960, in which he and his associate successfully diagnosed barbiturate poisoning in two young patients who had slipped in and out of comas for months, baffling 20 fellow physicians.

People with “sleepy beauty” syndrome have had coma-like states from which they have not recovered, sometimes for months or years.

before Howard and his associate examined the patients and determined it was a case of barbiturate poisoning, about 20 other doctors were unable to establish a diagnosis. This was confirmed by further blood testing.

At age 67, Tucker passed the Ohio Bar Exam in 1989, making him likely the oldest person ever to pass the bar in the United States. Due to his qualification in legal education, Tucker took on medical-legal cases and still continues to consult. When many of his colleagues retired to avoid the challenge of changing technologies, Tucker persevered with his trademark thirst for knowledge and was never too proud to ask the youngsters for guidance.

Speaking of his grandfather, Austin told News 5 Cleveland, “He calls me for help on things and it’s never just, ‘Austin, can you do this for me?’ It’s, ‘Austin, can you show me how to do this?’ He’s really interested in learning … he’s just fascinated with the world.”

During the peak of the COVID-19 pandemic, Tucker went to the hospital to help treat his patients. He said: “I truly love what I do, so going into the hospital to treat my patients was a no-brainer … I obviously took the necessary precautions to stay safe and protect myself, but I still went to work like any other day.”

For his 100th birthday, this year, his family threw him a party. The day after, he was invited to throw the ceremonial first pitch at the Cleveland Guardians versus Chicago White-Sox baseball game, “which was a real treat,” he said.

“I think I’ll live forever knowing that it’s not real. But I feel that way. I never think of death,” he said in an interview with Today. “You die once, but you live daily … focus on the living.”

An average working day for Tucker starts at 9 a.m. and finishes at 6 p.m. He enjoys precious free time with his wife, now 89, who is still a practicing psychoanalyst, and their ten grandchildren. He also loves visiting restaurants, museums, and snowshoeing in the winter.

Tucker’s Secrets to a Long Life

Tucker feels he owes his long life to good nutrition, alcohol in moderation, being happy, and carrying “no hate for any ethnic group, religious affiliation, or race” in his heart. He also has great genes; Tucker’s father lived to 96 and his mother to 84.

In honor of his extraordinary grandfather, Austin has teamed up with director, Taylor Taglianetti, to film a documentary on Tucker’s life, titled, “What’s Next?” While the centenarian may have more projects in the pipeline, retirement is not one of them.

“I believe retirement is the enemy of longevity,” he said. “Even in my younger years, I never once contemplated retirement. When you love what you do and are still capable of doing it, why would you want to retire?”